Those boys from Brooklyn, Renato Poliafito and Matt Lewis, are no strangers on Chewing the Fat.  We just can’t get enough of their spectacular baking recipes from not one, but two great cookbooks: “Baked” (Stewart, Tabori and Chang 2008) and “Baked Explorations” (Stewart, Tabori and Chang 2010).  Today, we’d like to share a perfect way to start a weekend morning:   A crumb cake that’s more crumb than cake: The topping on this one is over the top. And for Andrew, it’s a trip right back to his childhood.
Andrew was one of five children. For years, right after Sunday School, the family would troop into the local bakery. There they were allowed to choose one Sunday treat a piece. Andrew, the second youngest, would wait his turn and having scoped out the entire store, would inevitably choose a New York-style Crumb cake.  And he’d base his choice on which individual crumb cake had the most topping. Which cake would yield the most  brown-sugar-y, butter-y, crunchy pieces that cover the entire top of the cake. They’re the mark of a true New York-style Crumb cake. What makes a crumb cake different from, say, a coffee cake?
Renato, a native New Yorker, lays down the law.  New York-style crumb cake has nothing to do with coffee cake.  It’s all about the topping and that topping should never contain nuts, the way coffee cakes do.  No crushed nuts. No whole nuts. No nuts of any kind. And a true New York-style crumb cake never has that telltale swirl of cinnamon or chocolate or both.   Instead under those chunks of brown sugar and cinnamon is a layer of lovely white cake moistened with sour cream.  This is not all that difficult or time consuming to make. (Easy for me to say, Andrew, of course, made it. )  If you are ambitious, you can wake your family and any weekend house guests up to a wonderful cinnamon scent wafting from the kitchen.  But if you’re not an early riser, make it the day or night before.  The cake stays in perfect shape for 3 days if you cover it tightly and leave it at room temperature. And by all means, serve it with cups of coffee.  But whatever you do, don’t call it coffee cake. Here is the recipe:

Recipe for New York-style Crumb Cake from Matt Lewis and Renato Poliafito
For the Crumb Topping: 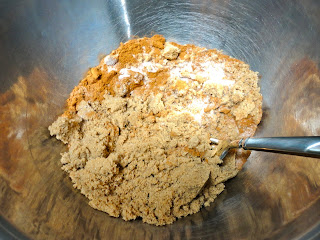 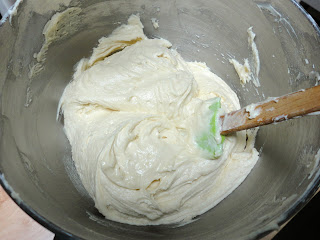 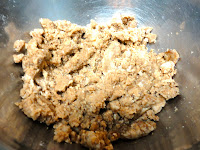 2.            Make the topping. Combine sugars, salt and cinnamon in a medium bowl. Pour the melted butter and whisk until combined, crushing any large lumps. Stir in flour until mixture is uniform.
3.            Make the cake:
Whisk together flour, baking powder, baking soda and salt in a medium bowl.
In the bowl of a stand mixer fitted with paddle attachment (you can also use a large bowl and a powerful hand mixer), cream the butter on medium speed until smooth. Scrape down the bowl and add sugar, and continue beating until fluffy. Add eggs one at a time and beat for 30 seconds, scraping down the sides of the bowl in between addition. Add sour cream and vanilla and beat until just combined. Stir (setting in “Stir” or low) in the flour in thirds, scraping the sides of the bowl before each addition, until incorporated. Batter will be thick.
Assemble the CAKE 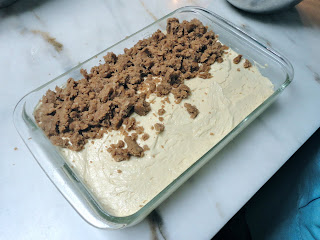 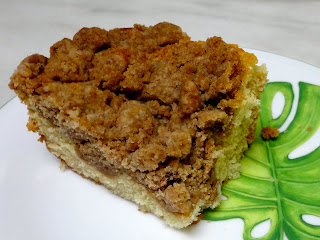