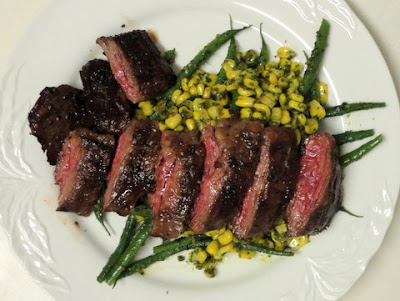 I don’t know whether you’ve been following the histrionics that have been going on over the re-designed Bon Appetit.  The new editor, Adam Rapoport, has taken over from Barbara Fairchild, who bowed out when Conde Nast moved the magazine from California to New York and she wouldn’t.  Mr Rapoport knows a thing or two about magazines having been at GQ for over ten years.  And he knows a bit about food since he worked as an Editor and Writer for the James Beard Foundation’s publications office before that.  His first issue was dedicated to Italy and didn’t seem to arouse much anxiety.  Next, however, he had the temerity to feature Gwyneth Paltrow on the cover and you’d think he’d knocked over Ruth Reichl with his car.
In a certain sense, the wrath heaped on Rapoport does lead back to Ruth, the foodie’s food editor of the late, lamented Gourmet.   As you may recall, Gourmet was shut down practically in the middle of the night.  No time for protests or boycotts, it was gone.  And if you were a subscriber, you suddenly found yourself subscribing to Bon Appetit.  And if, like me, you already subscribed to Bon Appetit, you discovered you now had a subscription running well into the next decade. This has enfuriated a lot of people who loved Gourmet, but have less interest in the more middle of the road Bon Appetit.
Now I am as wary as anyone of the cult of celebrity in this country but calling Ms. Paltrow this “anorexic, pretentious and nauseating woman” as was recently posted on the Bon Appetit website, seems a little harsh to me.  She does have her food bonafides:  Witness her travels with Mario Batali through Spain which produced “Spain…A Culinary Roadtrip” and now, of course, she has her own cookbook  “My Father’s Daughter: Delicious Easy Recipes Celebrating Families and Togetherness” . Not to my surprise, the book is getting mixed reviews.
As I delved beneath the Gwyneth cover, I have to take issue with its detractors.  I felt the old Bon Appetit was getting to be quite a bore. And in checking Chewing the Fat, I see an interesting pattern.  We’ve sourced recipes from Bon Appetit 5 times since we started.  Contrast that to the 12 times we’ve latched on to something we loved in Fine Cooking.  No, I think the new Bon Appetit is not only a good read but I am all set to cook some terrific new recipes from it.
Now all of this is to tell you about a feature I really enjoyed in the magazine.  It was called “The Summer Cooking Manifesto” and it gave 21 new rules for summer eating.  Rule Number 7 gives you the gist: “No one is going to improve on the tomato sandwich”.  But the one that spoke to me and leads right into this recipe is Number 8, the following: “No dish you make between June and September  should need to be served “piping hot”.
I could feel myself exhale when I read that.  Because let’s face it, ‘piping hot’ flies completely in the face of any concept of lazy summer dinners and cooler kitchens.  This delicious steak dinner marries two seasonal vegetable classics, sweet corn and haricots verts, with that most summer-y of all ingredients, fresh basil pesto.  Pesto could not be easier to make but you’ll have to wait for the recipe or go to Lidia Bastianich’s ode to the subject in her cookbook/travelogue “Lidia Cooks from the Heart of Italy”.  It’s there in the section on Liguria.  I promise a full post on the subject in the near future.  But for today, it’s all about the ease of tossing corn and haricots into the pesto, salt and peppering the steak before tossing into a cast iron skillet.  It’s just delicious tastes and does the new government “nutrition plate” proud by loading yours with crisp tender vegetables.
One more thing: Skirt steak has risen in popularity to the point where it is now getting very expensive.  I happen to love the extreme beefy flavor of skirt steak. My friend, Jayne, on the other hand, thinks it’s too gamy and doesn’t like it one little bit.  There’s no rule against substituting another cut of beef.  Much to my amazement, Sirloin steak is now half the price of Skirt steak at our butcher.  So adapt and save.  Here’s the recipe.  Oh, it’s from Ruth Reichl’s Gourmet in 2006, by the way.
Recipe for Skirt Steak, Sweet Corn, Haricots Verts and Pesto
1 1/2 lb skirt steak
3/4 teaspoon salt
1/4 teaspoon black pepper
1 1/2 tablespoons olive oil
1 ear corn, kernels cut off
3/4 lb haricots verts, trimmed
1/2 cup prepared basil pesto
preparation                                                            Pat steak dry and cut into 4 pieces, then sprinkle all over with salt and pepper. Heat 1/2 tablespoon oil in a 12-inch heavy skillet over moderately high heat until hot but not smoking, then sauté corn, stirring, until just starting to brown, 1 to 2 minutes. Transfer to a large bowl.
Add remaining tablespoon oil to skillet and sauté steaks, in batches if necessary, turning over once, 3 to 5 minutes per batch for thin pieces and 5 to 7 minutes per batch for thicker pieces (for medium-rare). Transfer steaks to a cutting board and let stand 5 minutes before slicing. 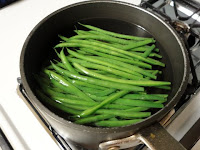