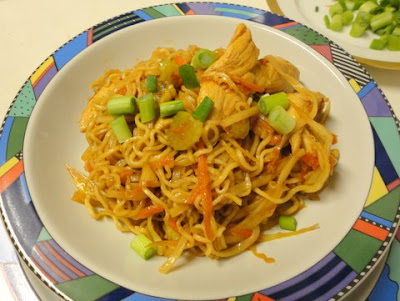 I have some good friends whose families are Filipino. And although for some time, my friend Ethel has threatened to kidnap me and take me to Queens for some Filipino restaurant food, we haven’t made it yet.   Come to think of it, there are far more Korean and Thai and Vietnamese restaurants all over the place than there are Filipino. And until this dish came along, I’d never cooked anything from there.  But this stir fry is well worth making for its subtle fresh flavors.  It’s absolutely not hard to make at all. There’s just some dicing and chopping and you’re good to go.  And you certainly don’t need a wok; You can easily use a big non-stick frying pan like I did.   For those of you averse to heat or feeding young children, this is a really wonderfully mild dish that no one’s going to find too spicy.
Filipino cooking is all about combinations of sweet, sour and salty generally combining all three in one dish.  However, it is not heavily spiced. I even had to send the recipe to my friend Ethel to see whether there was any chance I’d left something out or that the recipe had been spiced down for the American palate.  No, she said.  It was very much on the lines of what her grandmother prepared on her last trip to the Philippines.  I found this quite amazing given that Hispanic, Chinese and other Asian cultures have all influenced Filipino food.  The earliest Filipinos came from Southern China and Taiwan.  Trading with other Asian countries led to a lot more blending of cuisines.  It was the Spanish who brought chili peppers and tomatoes into the Phillipines.   But even then, the peppers were frequently used just for their leaves and not for their punch. After the Spanish established themselves, there was an even greater influx of ethnic Chinese.  In fact, Chinese food became the staple of the panciteriasor noodle shops that burst onto the scene in the 19th century.   The recipe I am sharing with you today could have come right from a panciteria. It even gets its Filipino name from there: Pancit.
Pancit is probably one of the best known Filipino dishes. But Pancit has about as many recipes as there are Filipino cooks.  This one, from a marvelously instructive cookbook called  “The Asian Grandmother’s Cookbook” by PatriciaTanumihardja (Sasquatch Books, 2009) uses both Rice noodles and and Chinese wheat noodles. But if those aren’t readily available you can use flat egg noodles and cellophane noodles which are relatively easy to find if your supermarket has an Asian aisle. Here’s the recipe:
Recipe for Pancit, Filipino Fried Noodles
8 oz dried vermicelli (rice noodles) (1/2 package)
8 oz pancit canton noodles (you can also use Chinese egg noodles) 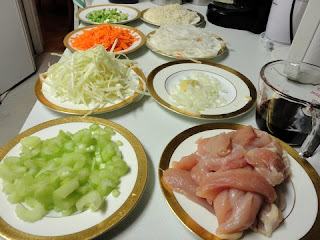 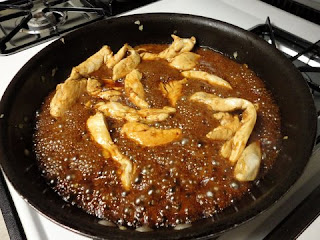 In a wok or large skillet, stir fry garlic and onions in oil until fragrant and onions are translucent, about 2 minutes, over medium-high heat. Add chicken and fry until no longer pink. Add toyomansi and soy sauce. Toss to coat chicken. Add vegetables and stir fry until cabbage wilts. 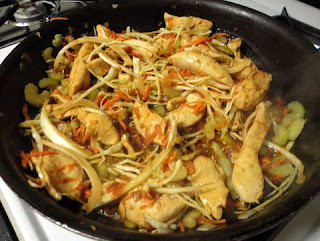 Add noodles and keep stir frying until well coated and heated through. I know it looks very unprofessional but I recommend using the two-handed method to evenly toss the noodles like below.
Add water or stock a few tablespoons at a time if noodles are looking too dry. Test rice noodles for doneness. Scatter green onions for garnish and serve.
Author: Monte Mathews
Filed Under: Asian Food, Chicken Dishes, Filipino Cooking, Filipino Fried Noodles with Chicken and Vegetables, Pancit, Stir-Fries, Weeknight Dinners
Jamie Oliver’s Steak with Herbed Salsa and a recipe for Sweet English Peas
Merguez Lamb Patties and Gold Raisin Couscous