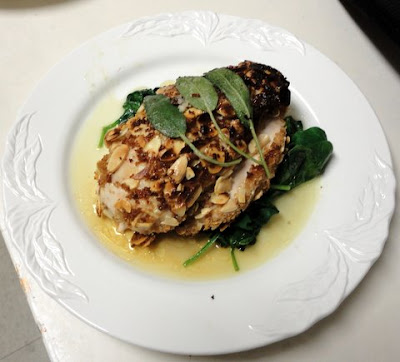 Last winter, at a Food Writer’s boot camp, I met a woman named Leitha who was contemplating writing a blog devoted entirely to boneless, skinless chicken breasts.  After a very preliminary discussion with her boyfriend, she abandoned the project.  Apparently he told her point blank that she would be eating alone most of the time if she went forward.  More recently, I read an entire rant on the subject of how breasts and their white meat are among the most reviled ingredients of restaurant chefs.  Writing for Time magazine, Josh Ozersky stated: “I’m going to be the one to say what nearly every person in the culinary world thinks: We all hate chicken breasts. Hate them. I speak for every chef, food writer and butcher in America here. There’s not one of us that has the slightest interest or respect for the chicken breast, at least compared with the dark meat. It might as well be a McNugget.”*

Now I happen to be a fan of dark meat.  I prefer it for its flavor. And  please don’t start talking fat content because both the fat and the caloric  differences between a breast and a thigh are next to nothing. According to the  U.S. Department of Agriculture, 100 grams of white meat has 0.56 grams of saturated fat and 114 calories; while the same amount of dark meat has 1
gram and 119 calories.  If you’re counting five calories and half grams of fat
you ought to see a psychiatrist before seeing a nutritionist.

All that being said, chicken breasts are so easy to prepare, and so lacking in substance on its own, they take on many flavors and can appear in many guises.  Today’s recipe is a perfect example of that.  Here, an almond crust replaces the crispy chicken skin with a layer of crunch.  The nutty crust keeps the chicken incredibly moist, sealing in the juices that are drained out of most boneless, skinless breasts in the cooking process. The sage leaves in butter that top the chicken add about note of flavor.  And it is simplicity itself to cook—a few minutes of browning on the stove top is followed up by a stint in a hot oven.  The whole thing comes together on top of any sautéed greens you favor.  I used spinach. The original recipe calls for kale, chard, even bok choy.  This recipe is the invention of Chef Angelo Auriana,who for almost 20 years was the chef at Valentino’s in Santa Monica CA and who now presides over a San Francisco restaurant call Ristobar (2300 Chestnut St. (at Scott) (415) 923 6464.  Take it away Angelo!  Here’s his recipe. 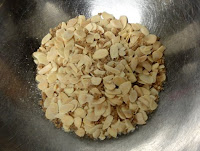 Combine the bread crumbs and sliced almonds in a shallow dish. Set aside. Place the flour and beaten eggs in separate shallow bowls. 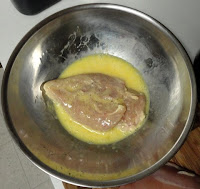 Lightly dust a chicken breast with some of the flour, shaking off excess. Dip the breast in the beaten eggs… 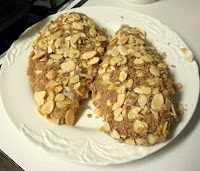 and then in the almond mixture, pressing on to make sure the chicken is thoroughly and evenly coated. Repeat with remaining breasts. 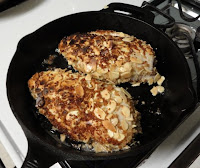 Pour the grape seed oil into an ovenproof frying pan large enough to hold all the chicken. Set over medium heat. When the oil just shimmers, place the breasts, with what would have been the skin side down, in the pan; sear until lightly brown. Turn the breast over, place the pan in the oven. Bake for 10-12 minutes, or until golden brown. 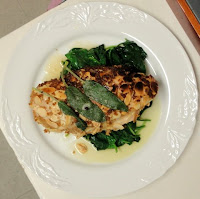 Place breasts on a warm platter. Discard any fat or liquid remaining in the pan. Add the fresh sage and butter to the pan, and place it over medium heat. When the butter starts to brown, turn off the heat. Return the chicken to the pan, and spoon some of the buttery juices over the chicken. Sprinkle a little sea salt to taste, and serve at once.
*To read Josh Ozersky’s entire article,  click here:  https://www.time.com/time/nation/article/0,8599,2045610,00.html#ixzz1D1cvfGv7