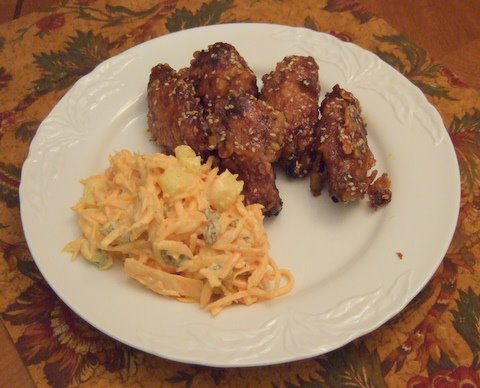 I thought about throwing my Chicken Wing recipe into the mix in time for Super Bowl Sunday.  But then I was inundated with Wings recipes: 10 in an email from RecipeZaar, another 8 developed by my heroine, Grace Parisi, in this month’s Food and Wine.  The world, I decided, did not need another Wings recipe. That was, of course, before I cooked mine. 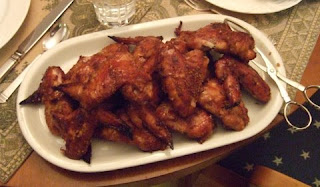 At left: Jalan Alor Wings from this summer’s Wing Fest.


I’ve been a Wings fan for awhile.  I spent a good part of the summer making wings of all kinds.  Barbecue Wings.  Roasted Wings.  Citrus-y wings.  But the hands-down winner of my taste tests was the wings I made with a recipe that started out as one for Korean Fried Chicken Gourmet.  It was from “Quick and Easy Korean Cooking” by Cecilia Hae-Jin Lee. I’ve grown very fond of Korean food having been introduced to it by my Korean friend, YoonJung Cosby.  I like its heat and its back and forth exchange of sweet and sour.

I changed the recipe for Fried Chicken to make my wings. My passion for Kecap Manis came into play.  The sweet, thick soy sauce was a fantastic addition to the recipe.  I also changed the recipe for the Corn starch coating the original called for.  I wanted it to stick better to the chicken which mine now does.  Then I used one of my Grace Parisi learnings: taking a traditional accompaniment to whatever you are cooking and putting a fresh spin on it.  In this case, lifting the inevitable carrot sticks of Buffalo Wings fame and making a carrot slaw that’s a riff on one of Ina Garten’s recipes.  I wish I could figure out something to replace the celery sticks next.  Here’s the recipe:
Recipe for Korean Chicken Wings:
2 lbs of chicken wings, cut into three pieces—the drumstick, the wing and tip which you can either save for stock or throw out.
2 Medium Onions, grated
2 large Garlic cloves, minced
2 large eggs
1 cup cold water
2 cups Cornstarch
1 tsp. Salt
1 tsp. Freshly ground black pepper
Canola Oil for Frying
6 tbsp. Korean Chili Garlic Sauce
5 tbsp. Kecap Manis (sweet soy sauce)
5 tbsp. Sugar
4 tbsp. Ketchup
4 tbsp. Sesame seeds, toasted
Juice of 1 lemon
Recipe for Carrot and Pineapple Slaw, a riff on an Ina Garten recipe.
2 bunches of peeled carrots
1 cup of Mayonnaise – I love Hellman’s Olive Oil based Mayo
1 cup Pineapple cut into bite sized pieces.
1/2 cup Golden Raisins
1 ½ tsp. Kosher Salt
2 tbsp. Curry Powder
½ tsp. Freshly ground black pepper.
Author: Monte Mathews
Filed Under: Chicken, Ina Garten, Kicap Manis, Korean Food, Party Food, Salads, Side Dishes
Review of Bill’s Bar and Burger and a recipe for Chicken Parmigiano Burgers
Beef Bourguignon courtesy Tyler Florence