Reviews of Mastro’s Ocean Club, Zimzala, a recipe for Fish Tacos from Wahoo’s and a lemon all in Orange County, CA. 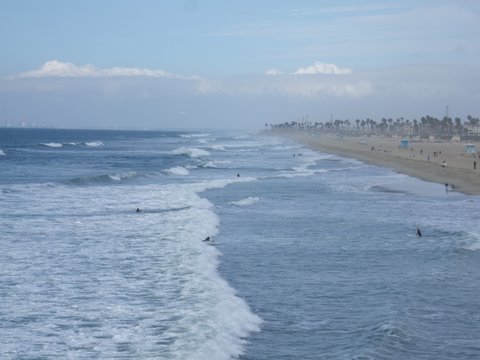 I had a terrific time in Orange County visiting my children. The weather was spectacular, the ocean beautiful and we had some very good food. And talk about photo ops.  I took over 600 pictures and my daughter-in-law Kym just sent me another 500 so for family pictures, look here.  But into each life, a little rain must fall, so let’s deal with the lemon first.

We set out to breakfast on Sunday morning at a local place that had all the Southern California requisites. Leafy patio. Sun dappled tables. A pretty crowd. And a fun name: Haute Cakes Café. (1807 Westcliff Drive, Newport Beach CA.) But a dog by any other name is still a dog. I’m still trying to digest what happened, pun intended.
We got to the restaurant a little before 1:30, not an unreasonable hour when you’re travelling with a 15 month old. Haute Cakes menu features 11 sandwiches. I opted for the BLT with an egg. The way things work at Haute Cakes, is that you stake claim to a table outside, then go inside and order and they bring the food out to you.  I duly ordered everyone’s breakfast/brunch and paid for it.
Not too much later, a server appeared with what I’d ordered for Kym, my daughter-in-law and Alex, my son. The waiter wanted to know if I was having anything. I told him what I’d ordered and he quickly returned to inform that there was no bread left. No bread in a restaurant with 11 sandwiches on the menu and the promise of toast with virtually egg dish. I asked for my money back because my heart was set on a sandwich. He came back with a print out of my bill and showed me I had not be charged for the non-existent sandwich. I simply could not believe that they would have taken my order and not told me they couldn’t possibly accommodate me. Anyway, scratch Haute Cakes off your list. Just plain atrocious in my view. However, Mason may have another point of view. See below. 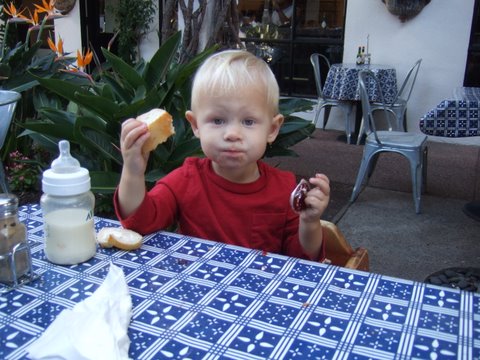 My children treated me to a really great dinner at a restaurant down the coast from Newport Beach, in an area called Crystal Cove.

Despite the name of the place, Mastro’s Ocean Club, at 8112 E. Coast Highway, Newport Beach, CA (949-376-6990) it is most famous for its steaks and certainly lived up to its reputation with a great piece of meat and some very good sides—macaroni and cheese with truffles and shoestring potatoes infused with vinegar. The latter took me all the way back to my childhood in Quebec, where a shaker of vinegar was standard equipment wherever you ate fries.
But what was far more fascinating than the food was the people watching. The Housewives of Orange County might have all been there en masse because their look-alikes certainly were. But it’s their husbands that amaze me.
Here we are in one of the richest counties in the United States, pressed between Pelican Hill and Newport Coast, two incredibly prosperous little enclaves, and the men were all dressed as if this was their Bowling night and not even the night of the League Dinner. I always feel badly for the women who go to some trouble to look dressed up – even if the predominant look was something my Mother always referred to as ‘mutton dressed as lamb’. I suppose this is in answer to a realization I had that a sizeable number of men of a certain age were escorting their nieces to dinner. Or at least very much younger women.
The only criticism we had of Mastro’s was the substantial wait time for a table reserved for 8:15 which we did not get near to until 8:50. As a New Yorker who eats out very frequently, I never suffer these extraordinary waits here. You have an 8 o’clock reservation, you sit down at 8. I can’t remember the last time I waited to be seated. But that’s been pretty standard in Southern California where I’ve spent a lot of time in the last 30 years. I just don’t get it.            I stayed at a new boutique hotel called The Shorebreak, 500 Pacific Coast Highway, Huntington Beach, CA 92648 (714-861-4470). 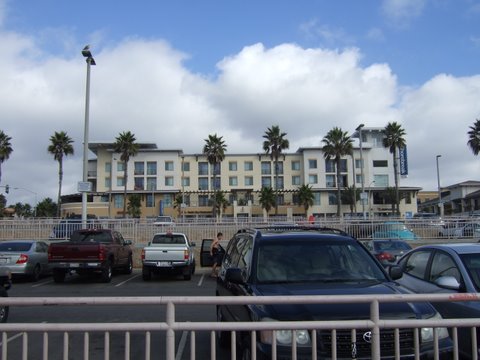 It’s practically brand new, hipper than thou (hipper than moi for sure) and I stayed there because it was an incredible deal. I’ve stayed up and down the Newport Coast, most recently at the Balboa Bay Club, which despite being the unofficial Republican Party Headquarters in that most Republican of counties, I love. It’s serene and beautiful and has a wonderful terrace restaurant next to the yachts.
The Shorebreak has a restaurant that’s certainly worth a visit. It’s called Zimzala (714-960-5050). I had an opportunity to chat with its manager, very personable and capable man named John Smiddles.
The restaurant is on a slow build in a town that is full of bar food places and not much fine dining. Zimzala has a Mediterranean menu with lots of intriguing items. We couldn’t work a dinner there into our schedule but our lunch was excellent. I highly recommend the 3 cheese flatbread, pictured here, which consisted of Provolone, Parmigiano, and Gorgonzola cheeses with mushrooms, tomatoes, fresh herbs perfumed with truffle oil. They still love truffle oil in the O.C. 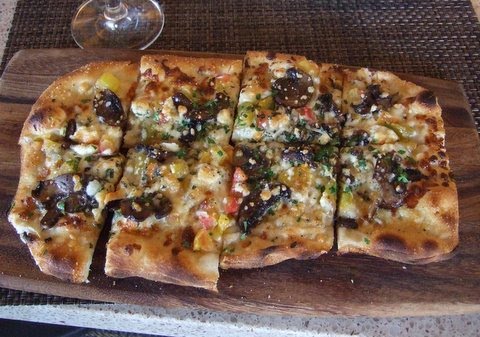 Finally there’s Wahoo’s. This Cal-Mex place is truly Californian in every respect. It’s a Mexican restaurant, opened by three Asian brothers just 21 years ago. It’s self-described as having a “Mexican Brazilian Asian menu and a Hawaiian North Shore vibe”. The brothers are certainly doing something right because there are now 52 Wahoos —12 in Colorado, 39 in California, 1 in Texas and and 1 in Honolulu. 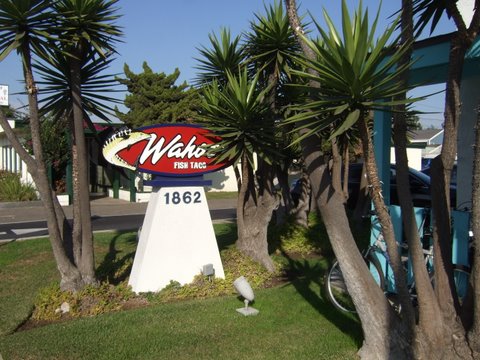 The Wahoo’s we visited was at 1862 Placentia, Costa Mesa CA. (949-631-3433) The menu’s on the wall, you order at a counter, you get a number and you get food that really is worthwhile. We started with Guacamole. 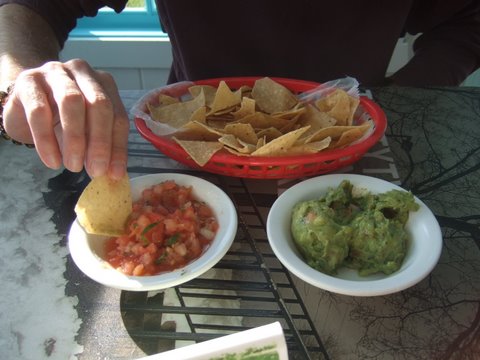 Now this is a classic but I think you’ll see from the pictures here, our tasting methods are nothing if not rigorous and extremely detailed. And in the end, we gave the guac at Wahoo’s forks up! 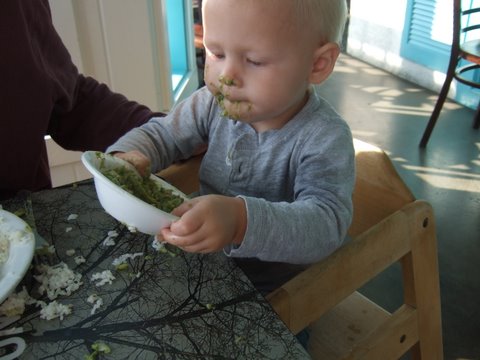 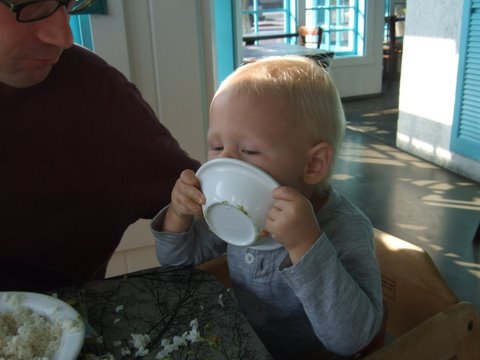 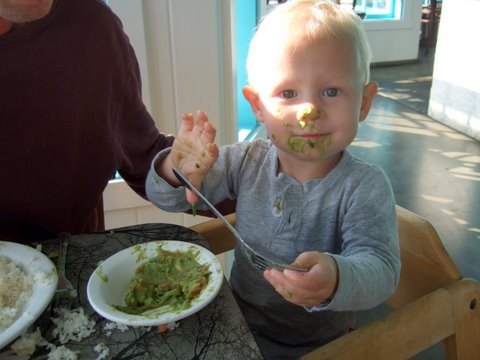 Moving onto our main course, there’s a lot on the menu. Alex had the beef enchiladas, 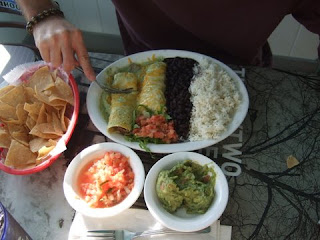 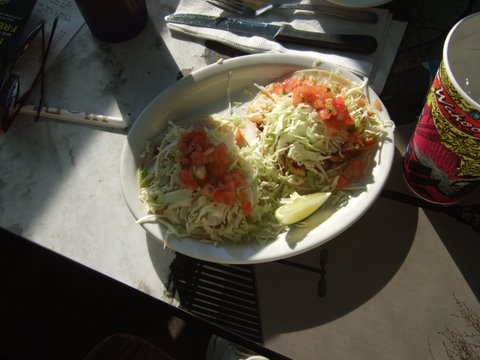 I opted for the Fish Tacos, one blackened and one grilled so I got to sample both varieties from the menu. I wanted to make these at home and this is the recipe I’ll use:

1. Place the fish in the baking dish and squeeze one half of the lime over it. Add the garlic, a good pinch of cumin, another good pinch of chili powder, a couple of pinches of salt, a generous drizzle of oil, and a few grinds of pepper. Mix until the fish is nicely coated, refrigerate, and let marinate at least 15 minutes. Meanwhile, make the slaw.

2. Combine the cabbage, red onion, and cilantro in a large bowl and squeeze the other half of the lime over it. Drizzle generously with oil, season with salt and pepper, toss, and taste. Add more salt and pepper if necessary.

3. Warm the tortillas by heating the frying pan over medium-high heat. Add one tortilla at a time, flipping to warm both sides. Wrap the warm tortillas in a clean dishcloth.

4. Brush the grates of the grill pan or outdoor grill with oil and heat over medium-high heat. (Tip: If you’re cooking on the stove, turn the fan on.) When the pan or grill is hot, remove the fish from the marinade and place it on the grill.

5. After a few minutes, check the underside of the fish. When it has grill marks and is white and opaque on the bottom, flip it. Cook the other side until white and opaque, about two to three minutes more, and remove the fish from the grill. It doesn’t matter if it breaks apart while you’re flipping it—it’s just going to go in the tacos.

6. To construct a taco, put some of the cooked fish in a warm tortilla and top it with slaw and your optional garnishes.

3 thoughts on “Reviews of Mastro’s Ocean Club, Zimzala, a recipe for Fish Tacos from Wahoo’s and a lemon all in Orange County, CA.”