Bouillabaisse with Garlic Aioli and Croutons 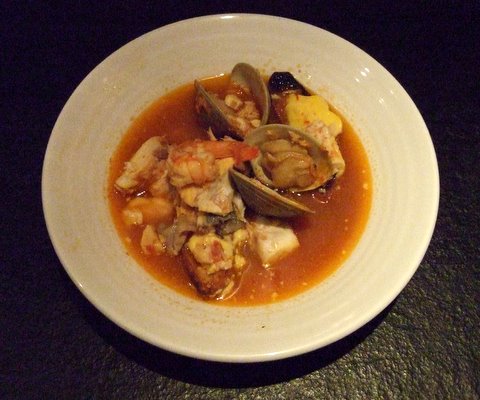 When I want to cook something as well known as this dish, I love to haul out the cookbooks that contain the recipe and read all of them before I do anything else.  Almost inevitably, when it is a signature dish such as Bouillabaisse, you’ll find as many recipes as you have cookbooks.  That was the case here.  Everyone from Patricia Wells

had a different opinion on what fish to use.
But leave it to Julia Child

, in “Mastering the Art of French Cooking”, to remind us that Bouillabaisse is, at its heart, just a simple Provencale fish stew. It was, according to Larousse Gastronomique, first cooked on the beaches near Marseilles over a wood fire. Its cooks were fishermen who added the least marketable of their catch to an aromatic cooking broth and served it over a piece of bread. Interestingly, the word “Bouillabaisse” refers to the method of cooking rather than an actual recipe. “Bouiller” (to boil) is combined with “Abaisser” to reduce.  And since the classic Mediterranean fishes associated with the dish—rascasse, congre, and rouget—don’t swim off Long Island, where I was cooking, my Bouillabaisse was never going to authentically Marseillais. And whose recipe did I end up with?

Balthazar is Brian McNally’s extraordinarily accurate interpretation of a French brasserie.  Opened in 1997, it’s now a SoHo standby.   From it’s antique mirrored menu walls to its plateauxof seafood, it transports you to France from the moment you walk in the door.  But the reason I chose its recipe for Bouillabaisse was simple:  It featured 3 fish and 2 shellfish that were readily available at our local fish market.  Of course, I did learn from my recipe research and added orange zest from Anthony Bourdain’s version to Balthazar’s.
Despite the length of the ingredient list and the suggestion that you make the broth one day and wait to cook the fish in it until the next, this is not a hard dish to pull off.  And it is an impressive and very pleasing addition to the dinner table.  Here is the recipe:
Recipe for Bouillabaisse with Garlic Aioli and Croutons
For the Marinade:
2 tbsp. Pernod
½ tsp Saffron threads
3 large tomatoes, cored and seeded or 1- 15 ½ oz can of tomatoes
¼ cup Olive Oil
1 ½ lbs. red snapper fillets
1 ½ lbs. black bass fillets
1 ½ lbs. cod fillets
For the broth:
½ cup Olive Oil
1 medium onion, sliced 1/8 inch thick
2 leeks, white parts only, cleaned and sliced 1/8 inch thick
1 fennel bulb, sliced 1/8 inch thick
4 large garlic cloves, peeled and thinly sliced
1 tbsp plus 1 pinch loosely packed saffron threads
¼ tsp. red pepper flakes
½ the peel of 1 orange, with as little pith as possible
1 bouquet garni consisting of 6-8 sprigs of parsley, 3 sprigs of thyme and 1 bayleaf, gathered together and tied in cheesecloth.
2 lbs of fish bones cut into 4 inch pieces and rinsed well.
6 plum tomatoes, sliced.  (Can use canned)
2 tbsp. tomato paste
1 cup dry white wine
12 small red potatoes, halved
1 dozen shrimp, peeled and cleaned.
1 dozen little neck clams, cleaned.
1 tbsp. Pernod
1 baguette, sliced on the bias and toasted.
1 cup of Aioli (Recipe follows) 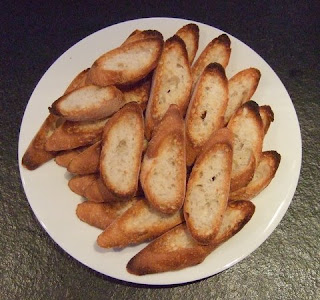 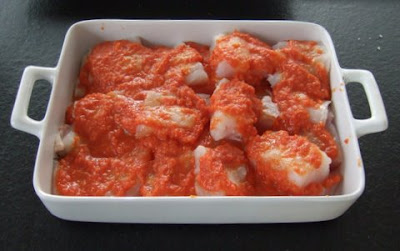 Prepare the marinade for the fish:
Bring the Pernod and ½ tsp of saffron to boil in a small saucepan.
Remove from heat and cool.  In the bowl of a food processor fitted with the metal blade, puree the 3 tomatoes and the ¼ cup of olive oil and then pulse in the Pernod and saffron mixture.
Arrange the fish fillets in a non-reactive casserole dish and pour over the marinade.  Cover with plastic and refrigerate overnight.
To make the broth: 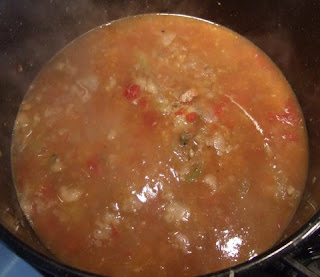 In an 8 quart stockpot, heat ½ cup of Olive Oil over a medium flame.
Add the onions, leeks, fennel, garlic, 1 tbsp of saffron, pepper flakes, bouquet garni, salt and orange peel.  Cook until the vegetables are translucent but not brown, about 15 minutes.  Raise the flame to high and add the fish bones.  Stir frequently to free whatever meat clings to the bones.  Cook for 1 minutes.  Stir in the 6 sliced plum tomatoes, the tomato paste, white wine and 2 quarts of water.  Bring to a boil and then reduce to a strong simmer and cook for 20 minutes.  Remove from heat.
Slowly pour the broth into a large strainer, catching the liquid in a large bowl.  Use the back of a spoon to firmly press the solids against the strainer, forcing as much liquid as possible through the holes. Return the strained broth to the stockpot and throw away the solids.  Cool and refrigerate overnight.
To make the Aioli: 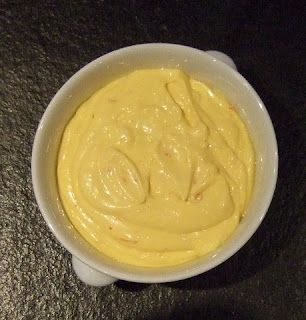 ½ tsp. saffron threads
2 tbsp. hot water
2 large egg yolks
2 cloves garlic, peeled and minced
½ tsp. Tabasco sauce
½ tsp. salt
1 tbsp. fresh lemon juice (from about ½ lemon)
1 cup Olive Oil.
Combine the saffron threads and the hot water and steep for 5 minutes.
Combine the egg yolks, garlic, Tabasco, salt and lemon juice in the bowl of a food processor.  Add the steeped saffron and water and blend for 30 seconds.  With the blades still spinning, add the olive oil in a slow, steady stream until an emulsion forms. Refrigerate, covered, for up to 1 week.
The next day…
Place the potatoes in a medium saucepan, cover with salted water and add the pinch of saffron.  Bring to a boil and cook until tender, about 20 minutes.  Drain.
Bring the strained broth to a boil and add the marinated fish along with the marinade, raw clams, shrimp, drained potatoes and a splash of Pernod. Cover with a tight-fitted lid and  cook over medium hear until the clams open about 3 to 5 minutes.
Serve in deep bowls each containing a selection of fish,shellfish, potatoes and a toasted slice of baguette and a dollop of Aioli.  Serve the Aioli in a small dish to be passed and spread on the baguettes.
Serves 6.
Author: Monte Mathews
Filed Under: Bouillabaisse, Brian McNally, Fish, One Dish Dinners, Seafood Dishes
Gratin of Bay Scallops from Ina Garten’s Back to Basics.
Linguine alle Vongole or Linguine with Clam Sauce

1 thought on “Bouillabaisse with Garlic Aioli and Croutons”