Got Turkey? This Turkey Tetrazzini is so good, you might want to roast another bird I am so fond of this recipe, I have, on at least one occasion, cooked a turkey merely to have the meat for this dish. I also have a sentimental attachment to this delicious way to eat the leftover turkey.   That’s because one of the first pieces of food writing I ever had published included this recipe. And there is its provenance: Our dear friend Michael Grim introduced me to its creator, Anne Jaindl, a family friend with whom Michael’s late father Bill had worked.
The Jaindl’s practically have turkey in their blood. It all started when John and Hilda Jaindl opened a restaurant in Allentown Pennsylvania in 1932. Called the Stone Tavern, it served food grown on their family farm. When Fred Jaindl, John and Hilda’s son and Anne’s husband, returned from World War II, he greatly expanded the family’s turkey flock and his Mother expanded her repertoire beyond the .25-cent turkey platter to include turkey cutlets, turkey sautés with lemon and walnuts and this recipe for Turkey Tetrazzini. “There was nothing that woman couldn’t do with turkey,” Anne said.
I’m going to include the article as it was originally written and I hope you enjoy it. But I can guarantee this is the best Turkey Tetrazzini recipe you’ll ever taste. 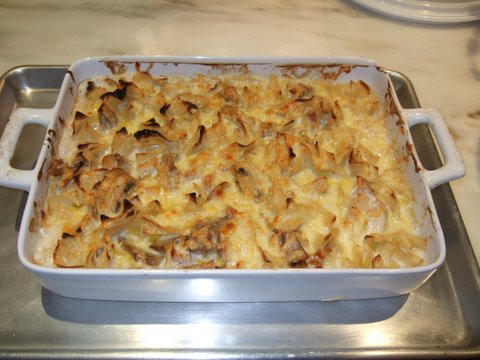 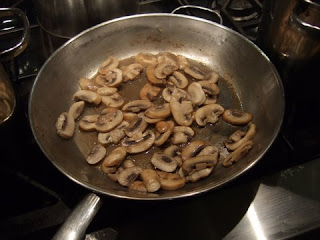 1. Bring a large pot of salted water to a boil. Add noodles and cook until just tender (8 minutes). Drain and put into a 9 X 12 baking dish tossing the cooked noodles with 1 tbsp. butter.
2. Preheat oven to 375 degrees. Melt 2 tbsp. butter in a large skillet over medium high heat. Add mushrooms and saute until lightly browned, 3-5 minutes. Remove from pan, toss into buttered noodles. 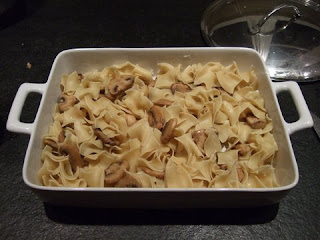 3. Melt remaining 5 tbs. better in same skillet over medium low heat. Sprinkle with flour, season with salt and pepper and cook, stirring, for 2 minutes. Then gradually add stock, whisking constantly. Increase heat to medium and simmer until sauce thickens, about 7 minutes. Add turkey, cream, sherry and nutmeg, adjust seasoning with salt and pepper.
4. Spoon turkey and sauce over noodles, top with sauce and sprinkle with cheese. Bake in oven until sauce is bubbly, about 30 minutes. Heat broiler and brown for 3-5 minutes. Serve at once. Serves 4 -6 depending on appetite. 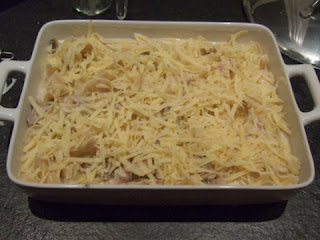 Now here’s the original piece I wrote for Saveur back in the ‘90s. Enjoy!

Sometime this November, Anne Jaindl will cook her 2500th Thanksgiving Dinner. But it won’t be on Thanksgiving. That day, says her son, David, the whole Jaindl family is “beat to the bone.” The 65 family members who gather on the last Thursday in November will head for their country club where the chefs will prepare the meal. It will be the same meal Anne has prepared every Sunday year-round for almost fifty years. The chefs will follow Anne’s recipes for everything from cranberry raspberry relish to apple pies made from the Jaindl’s own apples. “No one in our family likes pumpkin,” according to Anne. Now turkey, they all love turkey. And given that the Jaindls own the largest family turkey farm in the country, that is a very good thing.
About fifty miles north of Philadelphia, the Jaindl Turkey Farm in Orefield, PA will raise one million of the big birds this year, two-thirds of them destined for the annual food frenzy that starts at Thanksgiving and ends at Christmas.
Meleagris gallopavo is one of this country’s great gifts to world gastronomy. Native Americans introduced the continent’s first European visitors to the bird. Miguel de Passomonte in 1511, Francisco de Cordoba in 1517 or Cortes himself in 1519 brought the first of them back to Europe. In Spain, the bird was nicknamed the ‘cock of the Jesuits’, in honor of the religious order that had apparently shared more gastronomic adventures with the Native Americans than had the conquistadors. It was an immediate success. The Jesuits themselves brought the bird to France where they bred it. Since Columbus was still assumed to have reached India, with great logic, the French called it ‘poule d’Inde’ or the bird of India, dinde being the name it retains in France today minus the apostrophe. But it was the English, never at a loss for substituting one Oriental location for another, who called the bird “Turkey”.
No less than Benjamin Franklin himself wanted the turkey named the official bird of the United States. He was overruled in favor of the bald eagle. Wherever our patriotic affections lie, it is clear that in popularity and prominence, in the long run, the turkey has won out. Its supporters are everywhere likely none more so than the growing Jaindl clan whose 11,000-acre farm and 20,000,000 pound crop actually make them one the smaller producers in a state which ranks only 10th in turkey production.
The Jaindl ‘Grand Champion’ bird however is special. Fully two-thirds of the family’s business is for that four week stretch of time that comes between Thanksgiving and Christmas. David Jaindl, one of six brothers and sisters employed full time on the family farm is intensely proud of the turkey his father and grandfather have developed. A Jaindl bird can weigh in from 8 pounds to a 40-pound oven buster favored by restaurants and delicatessens. The average bird is 20 lb. and a Jaindl bird is a lean bird. So lean, with less fat and fewer calories, that it’s in the only ‘lite’ whole-bodied turkey confirmed by the USDA.
Fred Jaindl, the patriarch of the clan, has bred a bird with an abundance of white meat. Each year he personally selects 30,000 breeders for the breeding season which begins in February. These breeders will lay up to 18,000 eggs daily. By the end of the season. each of Fred’s breeders will have produced about 35 poults. The poults are delivered to a hatchery which can handle 90,000 of them a week. From there they go into incubators and 28 days later they are hatched. After 10 days in a nursery, the newly hatched Jaindl flock is moved to a barn where they will spend their 20 to 30-week lives. Fed corn grown on the property and soybean meal, along with minerals and vitamins, Labor Day marks the beginning of the turkey harvest.
Anne Jaindl, a mother of eight, is “The Cook” in the family. Every Sunday of the year she roasts the 22 to 25 LB bird she favors. Four turkeys are served, this to allow everyone to take home the leftovers they love. And does this family love turkey? Amazingly and to a person, yes. David eats it at least once a week. And when his grandmother Ann took Adam, age 9, out for dinner the day after the family’s standard Sunday dinner, he ordered you-know-what.
Author: Monte Mathews
Filed Under: Ann Jaindl, Fred Jaindl, Leftovers, Turkey, Turkey Tetrazini
Tags: Thanksgiving Leftovers, Turkey Leftovers Recipes, Turkey Tetrazini, What to Do with Leftover Turkey
Fresh from my Cheese Journey: Broccoli and Blue Cheese Soup
Instant Pot Chicken Soup Two Ways…with and without Noodles

4 thoughts on “Got Turkey? This Turkey Tetrazzini is so good, you might want to roast another bird”