Thomas Keller’s Fall from Grace…Is this recipe his redemption? 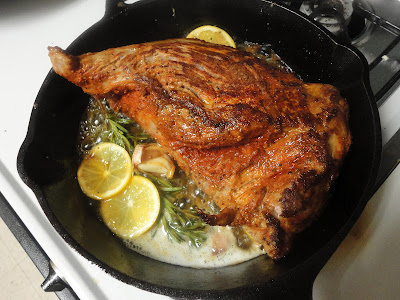 Last week the unthinkable happened. Thomas Keller is surely one of the most famous of all American chefs. His  “The French Laundry” in Yountville, CA was called “the best restaurant in the world, period” by Anthony Bourdain. Chef Keller’s other offerings sealed his place in the culinary firmament.  His Per Se, down the street from us at Columbus Circle, is considered one of the city’s top restaurants and has been since the day it opened in 2004.   Per Se also has the distinction of being at the very top of the city’s restaurant price lists.  Its nine course prix fixe is offered at $325.00.  Without wine.  Lunch is a virtual bargain: $215.00 prix fixe but that’s for only 5 courses.   You’ll have to ante up to $255.00 if you want seven courses.  Well last week, The New York Times dropped a bomb.  The newspaper’s Restaurant critic, Pete Wells, dropped Per Se from 4 stars to 2. And, as a friend said yesterday after reading its review, “it’s amazing it got that many”.

Phrases calling the restaurants offerings “ranging from respectably dull at best to disappointingly flat-footed at worst” were bolstered by food descriptions like “bouillon as murky and appealing as bong water”, “purée that tasted like peanut butter to which something terrible had been done,” and “a dismal green pulp of cooked romaine lettuce, crunchy and mushy at once”.  My, my.  Surely the service made up for the kitchen. But no. “Servers sometimes give you the feeling that you work for them, and your job is to feel lucky to receive whatever you get”.  At this point, I had to feel a certain twinge for Thomas Keller.  After all, the man has contributed mightily to this blog.  His 5 recipes here have garnered 23, 733 views and counting. So today, I am going to republish the most popular of all. It’s for Santa Maria Tri-Tip, a roast of beef which, mercifully, sells for 6.49 a lb. But what exactly is a Tri-Tip? Read on…
Atri-tip is a 1 ½ to 2 ½ lb. triangular piece of beef that sits at the bottom of the sirloin.  Because it is extremely low in fat, it generally ended up in the hamburger pile or chopped into cubes for soup making.   Today it is prized for its rich flavor. However, having a lower fat content means it can dry out faster than fattier cuts.  But use a good rub or marinade, and it’s hard to go wrong.  And almost certainly it will win you over on price if nothing else.  Or perhaps you will be tempted to try it because Chef Keller uses it. 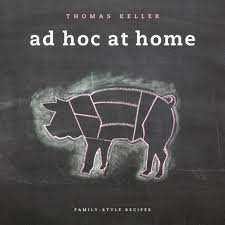 The recipe comes from Keller’s  “Ad Hoc at Home” (Artisan/Workman 2009), and it contains many of the items served at  Chef Keller’s second restaurant in Yountville, “Ad Hoc”.  I have three of the Chef’s cookbooks, “The Laundry” and “Bouchon”, and while all three are filled with glorious food, gorgeously photographed, the recipes in the first two books are just pipe dreams for most home cooks.  “Ad Hoc At Home” succeeds in making its recipes far more approachable.

Before I get to the actual recipe, I want to repeat a story that Jane Kramer wrote about Thomas Keller in the New Yorker in 2005. It seems that, at age 20, wanting to spend the America’s Cup racing season in Newport, Rhode Island, Keller needed to find a job.  One day on the beach in Naragansett, RI, he met his mentor.  A chef at the Dune Club, Roland Henin, hired Keller to work in his kitchen.  Later Keller would say that what he admired most about Chef Henin had nothing to do with cooking:  The Chef was “6 foot 4, French, in his thirties and had a great-looking girlfriend and his own Jeep”.  What exactly Keller learned that summer was hard to imagine.  As Ms. Kramer points out the membership of the Dune Club “usually sat down to dinner three sheets to the wind and unlikely to taste the difference between a homemade demi-glace and a can of College Inn.”  Apparently Chef Keller applied himself vigorously and the rest, as they say, is history.

The recipe for Santa Maria Tri-Tip takes its name from the town of Santa Maria, just north of Santa Barbara CA.  That town was famous for using this cut of beef at barbecues.  This recipe browns the meat on the stovetop and finishes it off in the oven. But when summer comes, it will be worth trying on the grill. First, it is rubbed all over with two kinds of paprika and freshly ground pepper, wrapped tightly in plastic wrap and left to overnight in the refrigerator.  The next day, you take it out of the refrigerator a half hour before cooking.  The Meyer lemons and the rosemary give the dish a surprising amount flavor, so do the requested basting on the stovetop.  After browning, your Tri Tip roasts in a low oven for 40 minutes.  The recipe says for 40 to 60 minutes but I found it was ready in 40 and my Tri Tip topped the scales at 2 ½ lbs.  Let it rest a good long time then carve against the grain.  This is a great way to enjoy roast beef mid-week.  And to be able to say, “I had dinner with Thomas Keller the other night…” and then be able to repeat Per Se’s dreadful review verbatim. 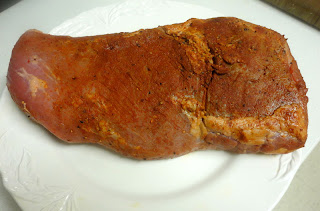 One 2 1/2 pound tri-tip roast, about 3 inches thick at its thickest point 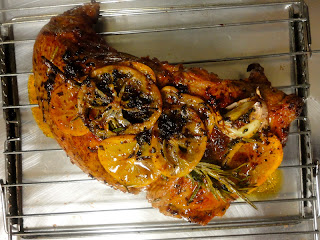 Pat the meat dry with paper towels and sprinkle on all sides with salt. Heat some oil in a large frying pan over high heat. When the oil shimmers, add the meat and sear, without moving it, for 1 to 1 1/2 minutes to brown the bottom. Turn the meat over, add the butter, rosemary, garlic, and lemon slices, and brown the second side of the meat, another two minutes or so. As it browns, spoon the butter mixture over the top of the meat from time to time. Transfer the meat to the rack and arrange the lemon, rosemary, and garlic on top. 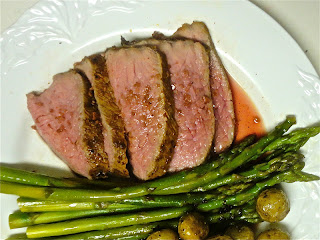 Put the roasting pan in the oven and roast for 40 to 60 minutes, depending on the thickness of the roast, until the temperature in the center of the meat is 135 degrees (or 125 degrees if you are me). Let the meat rest on the rack in a warm spot (such as the back of the stove) for about 30 minutes for medium rare, allowing the juices to redistribute.

7 thoughts on “Thomas Keller’s Fall from Grace…Is this recipe his redemption?”