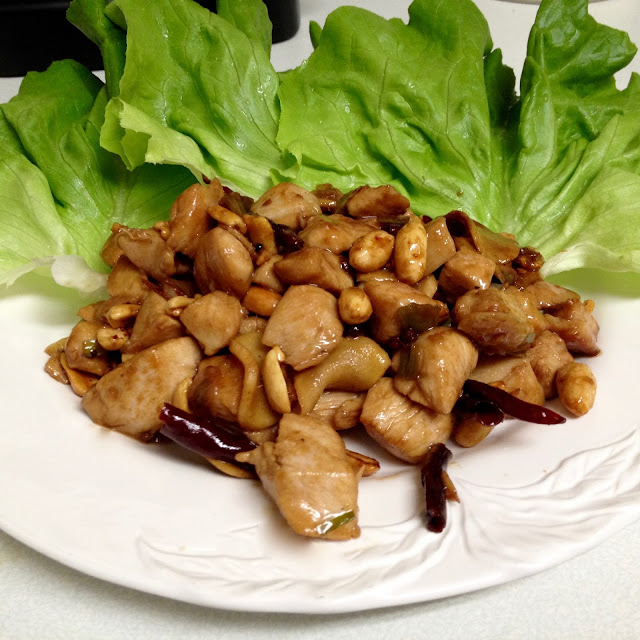 I like cooking Chinese food at home.  And I had an overwhelming desire to do so after my stay in Milano last month.  My Italian ‘sister’, Sofia has a real problem with gluten.  This, unfortunately, removes a great deal of Italian food from her diet. So when I wanted to take Sofia and her husband, Mario, out to dinner she chose a local Chinese restaurant in the Art Deco district of Milan where she lives.   This was not necessarily a good sign since I had not see one Asian face in the neighborhood until we arrived at the family-run restaurant.  Sofia is so off gluten, she actually brings her own sauté pan fearing that some hint of flour may be left in the restaurant’s pans.  And how was the food?  Quite possibly the worst Chinese food I have ever tasted.  And you have to go a long way to ruin Chinese food—especially its stir-fries, which aside from chopping and prepping, are among the easiest things on earth to cook.  And today’s Gong Bao Chicken with Peanuts, wildly popular in this country, is no exception. You can be forgiven if the name is unfamiliar to you.  That’s because in America, it’s more often called Kung Pao chicken. And interestingly, it’s not terribly popular in China.
Gong Bao Chicken is full-on spicy, hailing as it does from Sichuan Province, home of China’s spiciest cuisine.  You can find the dish in other parts of China, generally far less spicy than the original. But you’ll be missing out on this chili-pepper flavored recipe that combines chicken, ginger, garlic, green onions and peanuts and then kicks the spice content up with Sichuan peppercorns.  The dish is relatively new in Chinese cooking: It’s believed to have been named for a man named Ding Baozhen who was the Governor of Sichuan Province in the late 1800s.  His title,  Gongbao or Kung-Pao, means Palace Guardian in Chinese.   So how did the dish lose favor? During the Cultural Revolution of Chairman Mao, the dishes name became political poison because of its association with Mr. Ding.  The dish was renamed Hongbao Jiding, which translates most unfortunately to “Fast-fried Chicken Cubes”.  It was also called Hula Jiding which is only slightly better. It means “Chicken cubes with seared chiles”.  Mercifully the dish was rehabilitated during Deng Xiaoping’s reforms in the 1980s and called by its original name.  Still, it remains unpopular in China. This is said to be because it uses the breast meat of chicken which is perceived to be tough.  Apparently when the Chinese taste American versions of the dish, they are startled at how tender the chicken is.

The version I am sharing today came from the New York Times’ Julia Moskin. She nicked it from a British journalist, Fuschia Dunlop, an authority on Chinese cuisine whose cookbook is called “Every Grain of Rice” (Norton 2012).   It’s close the classic recipe and only veers away from it once.  Like the original, the cooking vessel (I’d say Wok, but you don’t need one, any non-stick skillet will do) is seasoned with oil, then the chili peppers and Sichuan peppercorns are added to the oil.  The chicken is stir-fried, the green onions, garlic and ginger are added. A simple sauce is poured over the dish and then roasted peanuts  are tossed into the finished dish.  In China, the nuts may be either peanuts or cashews.  Here’s where the original recipe differs: The peanuts or cashew nuts are dropped into the hot oil on the bottom of the wok first, then deep fried until golden brown before the other ingredients are added.  There are plenty of restaurant variations to this dish; sometimes orange or orange juice is added.  You can also find versions that don’t use chicken at all. Beef, Pork, Tofu or Seafood are pressed into service instead.  But the biggest difference between Western versions and the Chinese original is Sichuan Peppercorns. From 1968 to 2005, they were illegal to import into this country. The ban was lifted, but very few restaurant versions incorporate the peppercorns, which add immeasurably to the flavor of the dish. I served this on butter lettuce, which we used as wraps.  But a bowl of steamed or fried rice would be most appropriate. Here is the recipe:

Recipe for Gong Bao Chicken with Peanuts from Fuschia Dunlop’s “Every Grain of Rice”
For the Stir Fry: 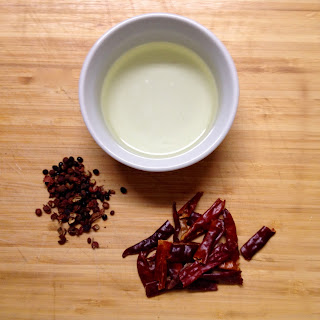 2boneless chicken breasts (11 to 12 ounces total), with or without skin 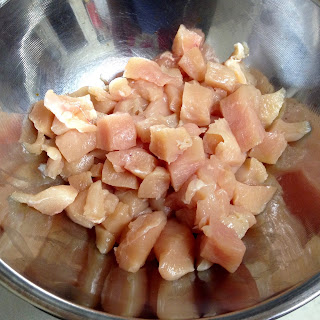 1. Cut chicken as evenly as possible into half-inch strips, then cut strips into small cubes. Place in a small bowl. Add marinade ingredients and 1 tablespoon water to bowl. Mix well and set aside. 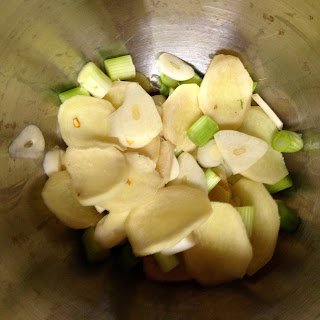 2. Peel and thinly slice garlic and ginger. Chop spring onions into chunks as long as their diameter (to match the chicken cubes). Snip chiles in half or into sections, discarding their seeds.

In a small bowl, combine the sauce ingredients. 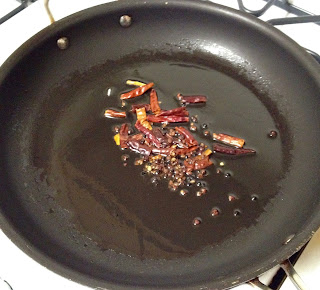 3. Heat a seasoned wok or non-stick pan over a high flame. Add oil, chiles and Sichuan pepper and stir-fry briefly until chiles are darkening but not burned. (Remove wok or pan from heat if necessary to prevent overheating.) 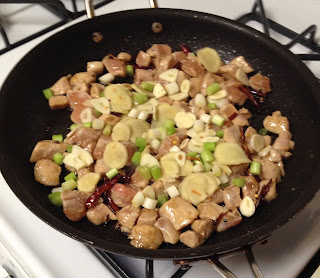 4. Quickly add chicken and stir-fry over a high flame, stirring constantly. As soon as chicken cubes have separated, add ginger, garlic and spring onions and continue to stir-fry until they are fragrant and meat is just cooked through (test one of the larger pieces to make sure). 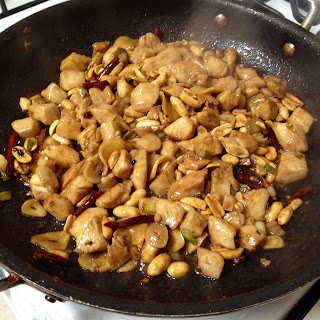 5. Give sauce a stir and add to wok, continuing to stir and toss. As soon as the sauce has become thick and shiny, add the peanuts, stir them in and serve.

NOTE: Store-bought roasted peanuts work well here, but if you want to roast your own peanuts, heat oven to 250 degrees. Place raw nuts on an oven tray and roast for 15 to 20 minutes, until fragrant and very slightly golden. (Keep an eye on them, as they are easily burned.) Cool nuts on a plate, then rub nuts between your fingertips to loosen their skins. Shake nuts as you blow over them; skins will blow away.
Author: Monte Mathews
Filed Under: Chicken, Chicken Breasts, Chinese Cooking, Fuschia Dunlop's Gong Bao Chicken, Gung Bao Chicken with Peanuts, Julia Moskin, Kung Pao Chicken, Stir Fried Chicken with Peanuts, Stir-Fries
Sara Jenkins’ Incredibly Easy Sausage Ragù or Ragù Done Right
Chicken Breasts with Tomatoes and Capers from Pierre Franey in The New York Times