Day Two of My Great Viking Adventure Part 2: Where you going? Barcelona…

For some reason, Security at Heathrow in London believes that traveling between Terminal 5, where 747s land and Terminal 3, which will take you onward to Europe, you have somehow managed to get your hands on bomb-making ingredients while transferring on their own carefully-guarded buses.  While a British cop informs you that all liquids will be confiscated, your hand luggage is once again screened, in a far more invasive way than it was in New York.  Dozens of passengers have containers of applesauce and hand sanitizers torn from their persons in an operation that wastes about 45 minutes time. 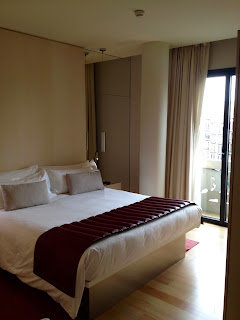 Fortunately BA 174 arrived forty minutes ahead of schedule so the indignity of having the staggering number of electronic devises re-inspected lost its sting and we took off for Barcelona on time.
Barcelona, however was another matter altogether. Sunday is sacred to Spanish border control agents and so a limited number of them showed up to check the passports of literally thousands of arrivals.  If there was any consolation, it was that by the time I arrived at Hotel Cram, I was able to access my room immediately.  The Cram, despite it’s awful name, is a Small Luxury Hotel of the World whose members can count on upgrades and extras like a substantial and included breakfast.  And if you prepay, you even get a very good breakfast included. 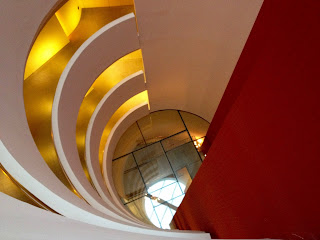 My room on the 5th floor overlooks a busy intersection.  The Modernist building has revamped interiors that would look perfectly at home on “The Jetsons”.  Once the windows are closed, complete silence prevails.  After a one hour catnap, and with my time here limited to two days, I set off to see one of the most spiritual places I have ever been.  La Sagrada Famillia had just been listed by AFAR magazine as one of travel’s ‘life changers’.   Apparently I am hardly alone in wanting to visit Gaudi’s masterwork. Mobs of people surrounded the great Cathedral and entrance was impossible until late the next day.  I circled the building slowly, took Barcelona’s terrific subway home and made on-line reservations for Tuesday’s first tour.
In doing research for where I would eat, I discovered that not only is Sunday sacred to Security at the airport but also one of the two nights restaurants shut down.  The other is Monday!  The selection was limited but fortunately, a family-run restaurant got high marks both from critics and from me, as it was just a block from the hotel.  So off I went to Etapes (Enric Granados 10 08007 Barcelona. Tel: +34 9333 23 69 14)  This wonderful restaurant run by the Montes (Yes, Montes) family could not have been a better place to sample a great tasting menu with three wines for 60 Euros.  Highly recommended, but you will have to wait until The Daily Meal runs my review of this wonderful place. 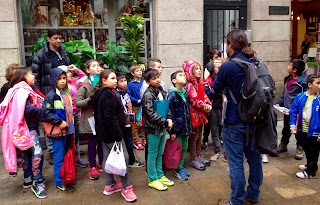 In closing, a word to Donald Trump.  The game is up.  There are no walls.  Barcelona is packed with people of all colors, a beautiful rainbow you see in the school children and the tourists.  At Etapes, in the immediate vicinity of my table were 5 Francais, 4 Finns, 2 Japanese women (who ate everyone under the table) and next to me, 4 Barcelona natives having dinner with 4 ethnic Chinese with Australianaccents.   So forget, Mr. Trump, your wall is done for.  And please take Dr. Carson with you.  Adios amigos.  Tomorrow, I board the Viking Star.
Author: Monte Mathews
Filed Under: Barcelona. Restaurant Etapes Barcelona, Montes Family Restaurant Barcelona, Viking Star. Viking Cruises
Juniper-Cured Gravlax from Trine Hahnemann’s “Scandinavian Comfort Food”