Somewhere in the back of my mind, I recall reading that there’s a food site with over 400 recipes devoted to a single subject: they all use Costco rotisserie chicken.  It sounds plausible. 76 million of the $4.99 bird were sold in 2014 alone. I am incapable of going into Costco and coming out without one whether I’ve spent $240 or just run into the store to get this phenomenal bargain. At Costco, it actually costs less to buy a cooked chicken than it does to buy a raw one.  And, oh what chicken!  Juicy, beautifully browned and seasoned, and, since last March, they are even anti-biotic free.  Caveat emptor: “Seasoned” is code for the spicy brine which gives the chicken so much flavor…and, unfortunately, also its sodium content.   A 3 oz. portion comes in at 140 calories with 7 grams of fat, 2.5 grams of saturated fat, 5.6 grams of sugar, 19 grams of protein and 0 grams of carbohydrates or fiber.  Then there’s the sodium at 460 milligrams.  For comparison, the current guidelines suggest salt should be limited to 2300 milligrams a day.  I guess all bargains come with some deal with the devil.   And in this case, the deal is delicious.

Whenever I bring one of the Costco birds home, I not only congratulate myself on my thrift, I also look for ways to use the chicken.  The obvious targets—endless variations on chicken salad, slices of chicken stuffed into sandwiches—are soon exhausted. Then I start a search for more. This time, I widened the window and instead of just looking for that elusive source of 400 rotisserie chicken recipes, I looked for chicken. That’s where I found Martha Stewart’s recipe for Chicken Cheesesteaks with Peppers.  The original called for one lb. of chicken cutlets. By using the rotisserie chicken, I cut the cooking time down of course, but I also created a second dish for anyone who wants a carb-free version.  I simply eliminated the bread altogether and the cheesy chicken and peppers formed what was close to a crust-free pizza!

Next, I moved on to another form of pizza.  At one point in life, I pretty subsisted on a diet of Stouffer’s French Bread Pizza.  This staple of college life was perfectly sized to fit into a dorm microwave or toaster oven.  Inexpensive, it was more fuel than great food.  And after an introduction to really good pizza, Stouffer’s all but disappeared but the memories lingered on.  In August’s Bon Appétit, lo and behold, a cook called Katherine Sacks, wrote a recipe for BBQ Chicken French Bread Pizzas with Smoked Mozzarella.  This one actually called for Rotisserie Chicken and I was astonished at how good it was. It was greatly helped by the soft ‘French’ supermarket loaf I bought.  In truth the Chicken Cheesesteak would have likely benefited from this particular bread as opposed to the chewier Baguette I used in its place.  Adaptability is one of rotisserie chicken’s appeal.  Here you could use any store-bought or home-made barbecue sauce.  I played with Asian flavored sauce which reminded me of an Asian-inflected duck pizza I’d loved at Wolfgang Puck’s.  The recipe is really limited only by your imagination.  And here are both recipes: 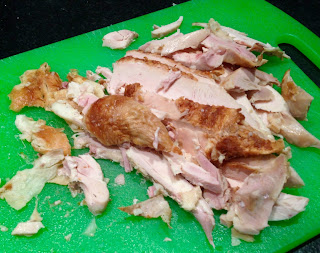 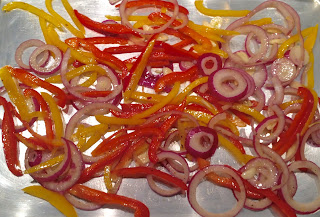 1. On baking sheet, toss together peppers, onion, garlic, and one tablespoon of oil. Broil, tossing occasionally, until crisp-tender and slightly charred, 8 to 10 minutes; season with salt and pepper. 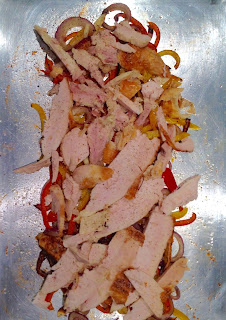 2. Put shredded chicken atop peppers in a single layer. 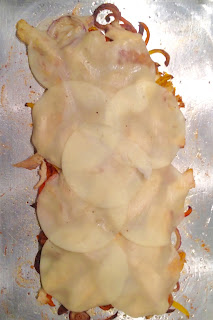 3. Top chicken and vegetables with cheese; broil until cheese is bubbling, 30 seconds to 1 minute. 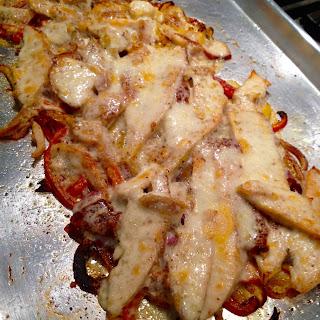 4. Scoop out most of the doughy center from both halves of rolls; discard. Spread rolls with mayonnaise; fill with chicken and vegetables. Serve immediately.  Top sandwiches with dill (just for color). 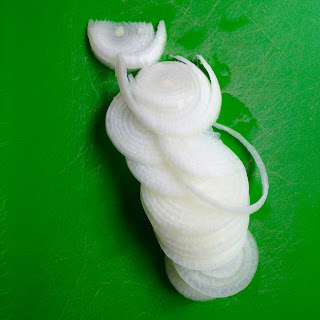 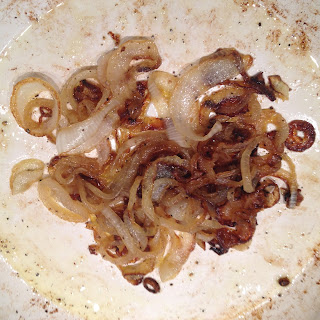 1. Position rack in top third of oven and preheat to 425°F. Heat oil over low in a medium skillet. Cook onion very slowly at a low temperature, stirring occasionally, until soft and translucent, about 15 minutes. Set aside. 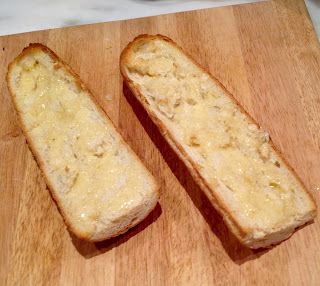 2. Melt butter and add garlic to it. Drizzle bread with butter and garlic
Place bread, cut side up, on a rimmed baking sheet and bake 5 minutes. 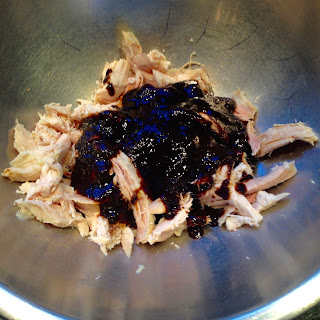 3. Toss chicken with 1/4 cup barbecue sauce in a medium bowl. 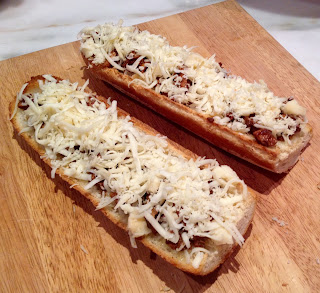 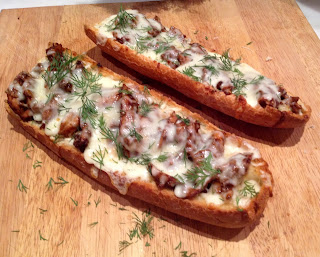 5. Bake until cheese is melted and golden brown, about 10 minutes. Top with dill, parsley or whatever green you fancy just for color.