I am a sucker for a good chicken recipe.  So the minute I saw that Food 52, one of my favorite food sites, had named Jamie Oliver’s Chicken in Milk a “Community Favorite”, I rushed right out and bought a whole chicken and everything else needed to make it.  There were 85 reader comments about Jamie’s recipe, most of them in the ‘off the charts’ category of sheer love for this recipe.  And as I am a true fan of Mr. Oliver, I felt sure that I had found chicken nirvana. All the photos I take of what I’ve cooked are in files generally labeled with the exact recipe name.  Not so my Jamie Oliver’s Chicken in Milk. Instead its file is entitled “Hideous Chicken”.   What went so radically wrong?  As readers know, I am pretty strict about following a recipe to a tee. I did in this case too. But I think I should have had fair warning when I read the following: “A one-pot technique for the most tender roast chicken, with the most strangely appealing sauce.”  The italics are mine.  The description went further, describing the strange thing that happens to the sauce.  It curdles.  There was an antidote to this curdling but Food52 brushed it away claiming that the curds are the best part and “the split sauce is actually the point”.  Well one man’s split sauce is another man’s idea of how to ruin a chicken. The bird itself was amazingly moist from the lactic acid in the milk I will give you that. But pouring the curdled, overly lemon sauce gave the chicken a terrible bitter taste and ruined it for me.  So you’d think I’d be put off Food52 for a while at least.  But last week, they published yet another chicken recipe. And it was not all that different from my “Hideous Chicken”.  But this time, they had me at Gratin. 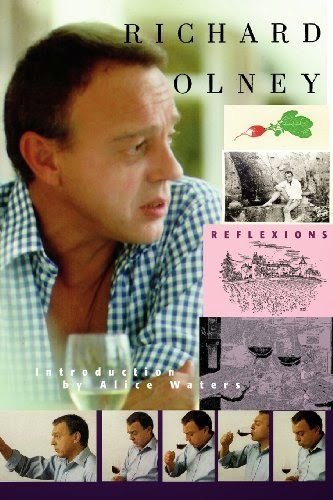 Richard Olney is hardly the household name that Jamie Oliver has become.  Behold the power of television.  Richard Olney was born in Iowa but most of his adult life was spent in France, in Provence to be exact.   He had moved to Paris in 1951 where he painted and cooked and wrote.  He was a prolific food writer.  In 1970 his “French Menu Cookbook” was published in English.  In it he extolled the virtues of the seasonal menu and wine pairings.  Then in 1974 he wrote “Simple French Food” and his fame skyrocketed.  He had a huge impact on Nouvelle Cuisine and California Cuisine.  Alice Waters became a disciple and James Beard a mentor.  He then went on to write the 28 volume Time Life series “The Good Cook”.  He died at age 72 in 1999. I first became aware of Olney on a cooking vacation in Provence. Reading up before we got there, I was intrigued by his writing. So when I saw that Food52 had singled out his recipe for Gratin of Chicken and the mouthwatering picture accompanying it, I was off to the market for another kosher chicken.

There was some communality between the Oliver recipe and the Olney one.  There was of course, the use of milk or cream. And there was also a command to lemon in both recipes.  In Oliver’s chicken, the zest of two whole lemons is used.  As you will see in the recipe that follows, they even tell you that this zest will ‘split the milk’, something I was determined not to happen in my Olney recipe. Olney himself wrote ““The acidity of the white wine and the lemon cause the cheese custard to curdle in the cooking, creating a texture that, personally, I find pleasant but may not please everyone.”  So I left out the juice of half a lemon called for and the white wine because the last thing I wanted was another curdled custard or sauce.  May I tell you that this is conceivably one of the best chicken recipes I have made in a very long time?  The cream tenderizes the chicken to beyond perfection.  The cheese and breadcrumbs are the perfect topping.  Served on a bed of rice with some simple haricots verts, this is a dinner dish that will please all comers.   And if I could have a word with Mr. Oliver, I might be able to tell you what on earth I did wrong with his recipe.  I’m printing both because when I went onto Food52 to comment/complain I was bombarded with commenters telling me I was out of my mind not to love his chicken. So I think it’s only fair to print both.  You choose which to make.  Chaqu’un a son gout, I reckon. 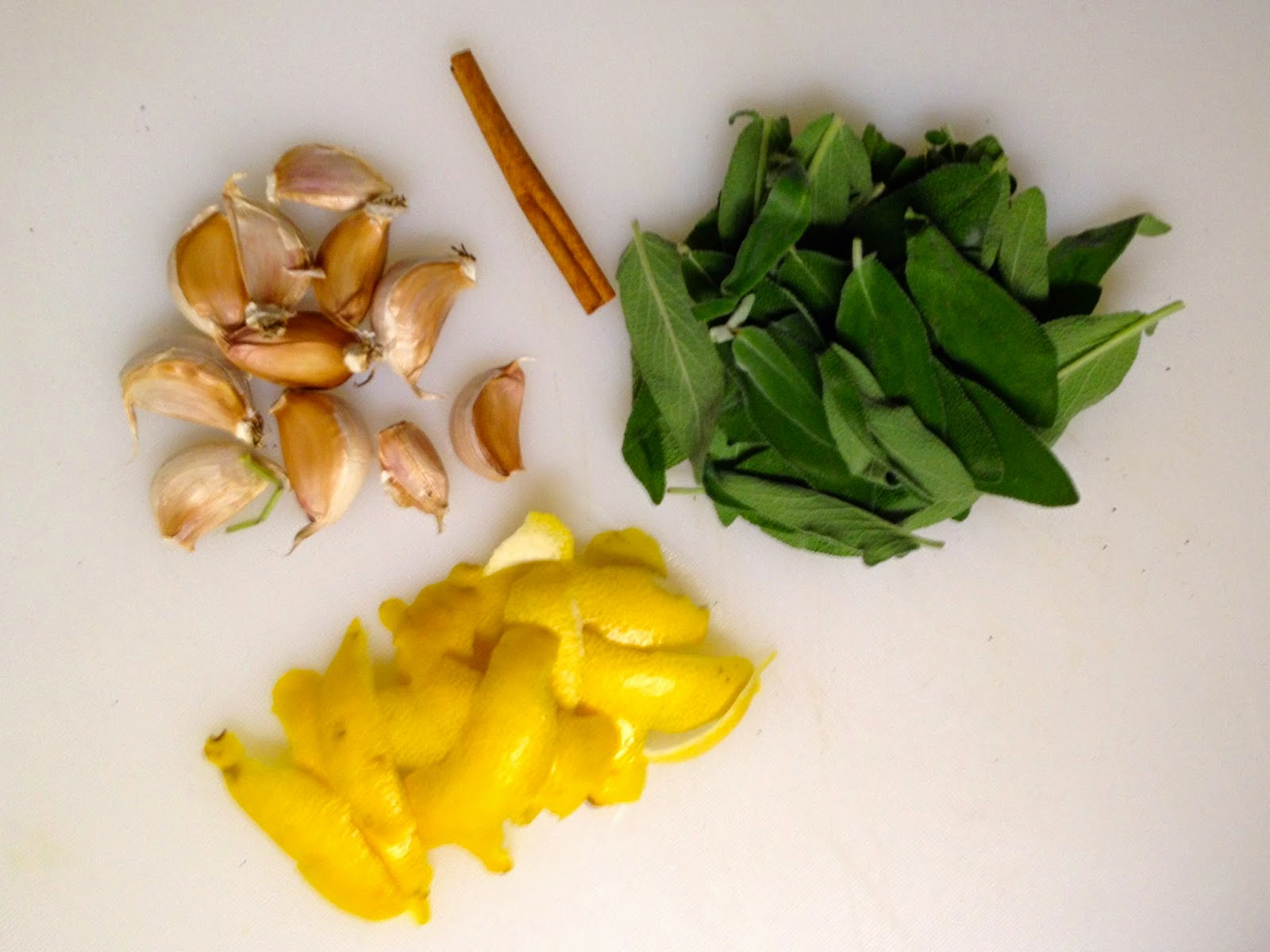 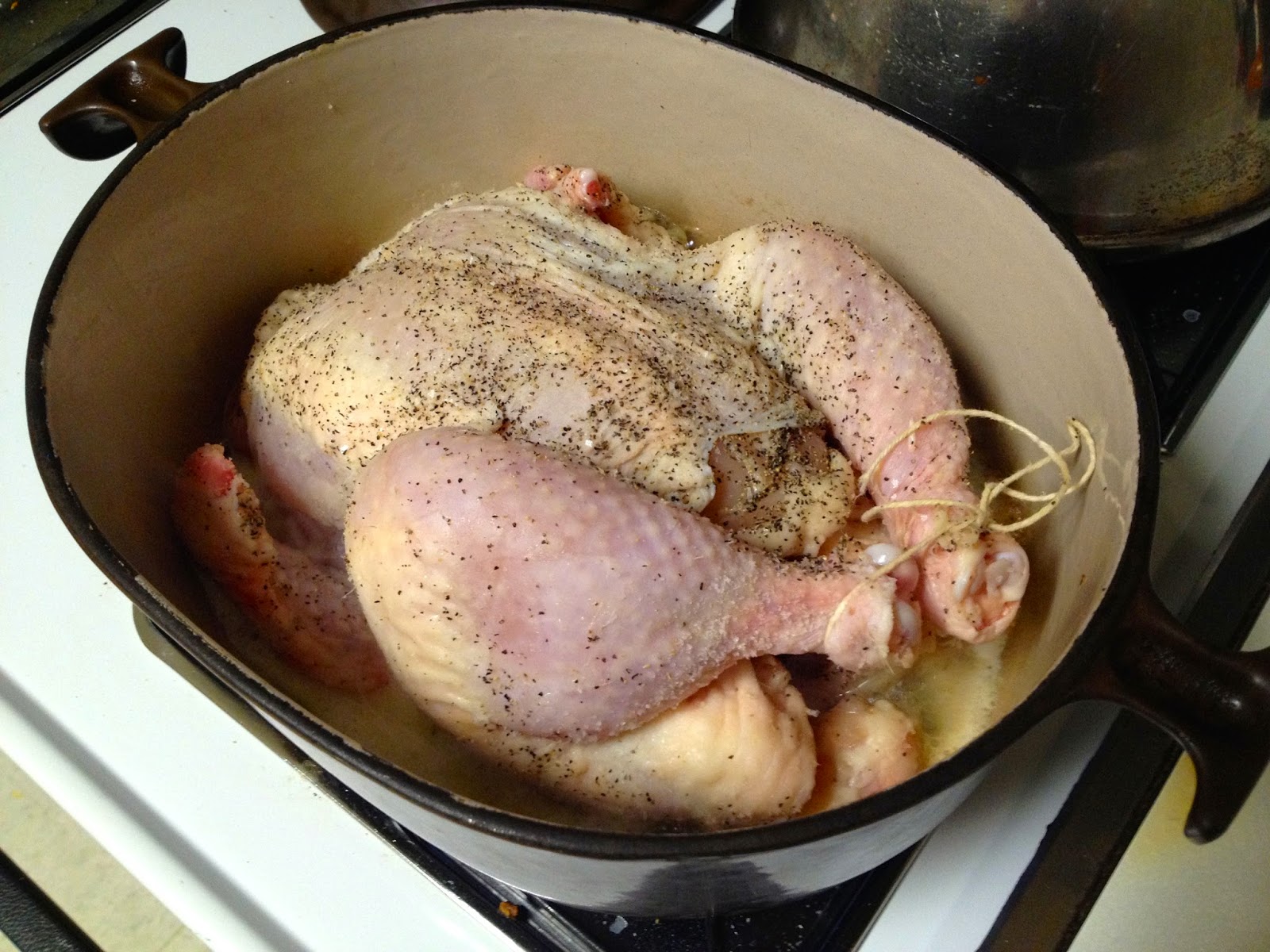 2. Season the chicken generously all over with salt and pepper and fry it in the butter or olive oil, turning the chicken to get an even color all over, until golden. Remove from the heat, put the chicken on a plate, and throw away the butter left in the pot (or save for another use). This will leave you with tasty sticky goodness at the bottom of the pan, which will give you a lovely caramel flavor later on. 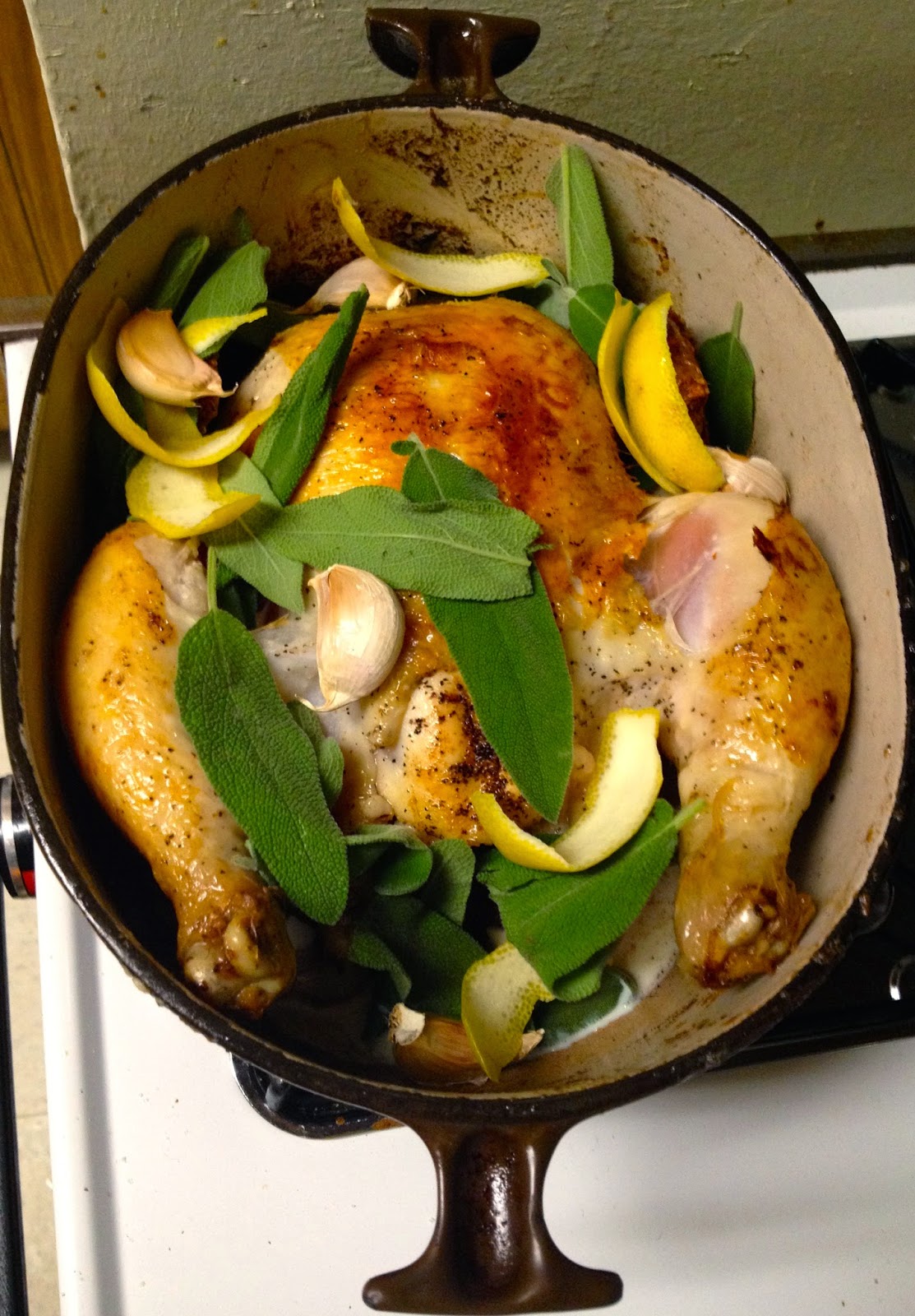 3. Put your chicken back in the pot with the rest of the ingredients, then cook it in the preheated oven for 1 1/2 hours. Baste with the cooking juice when you remember. (Oliver leaves the pot uncovered, but you can leave it partially covered if you’d like it to retain more moisture and make more sauce.) The lemon zest will sort of split the milk, making a sauce, which is absolutely fantastic. 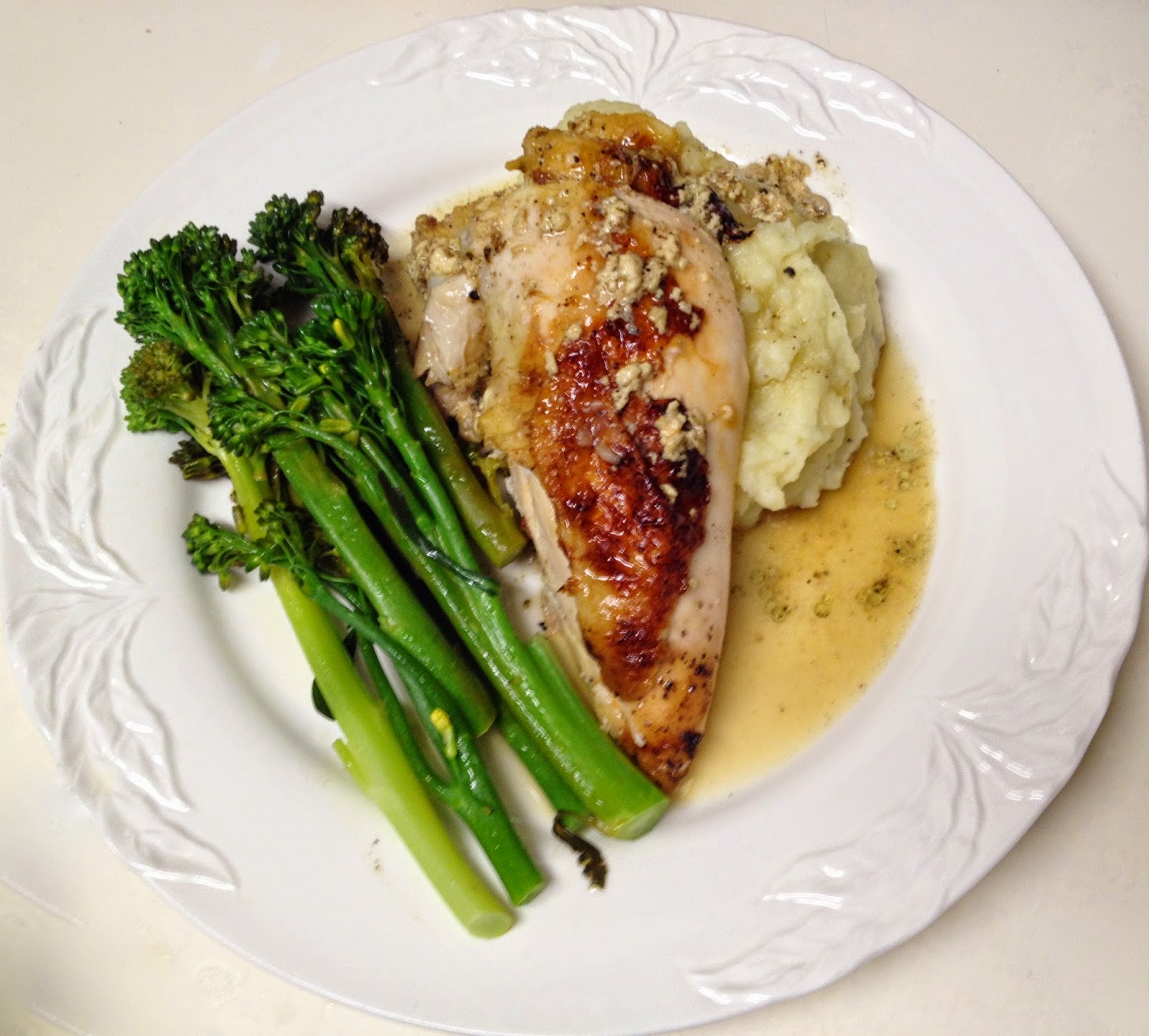 4. To serve, pull the meat off the bones and divide it on to your plates. Spoon over plenty of juice and the little curds. Serve with wilted spinach or greens and some mashed potato. 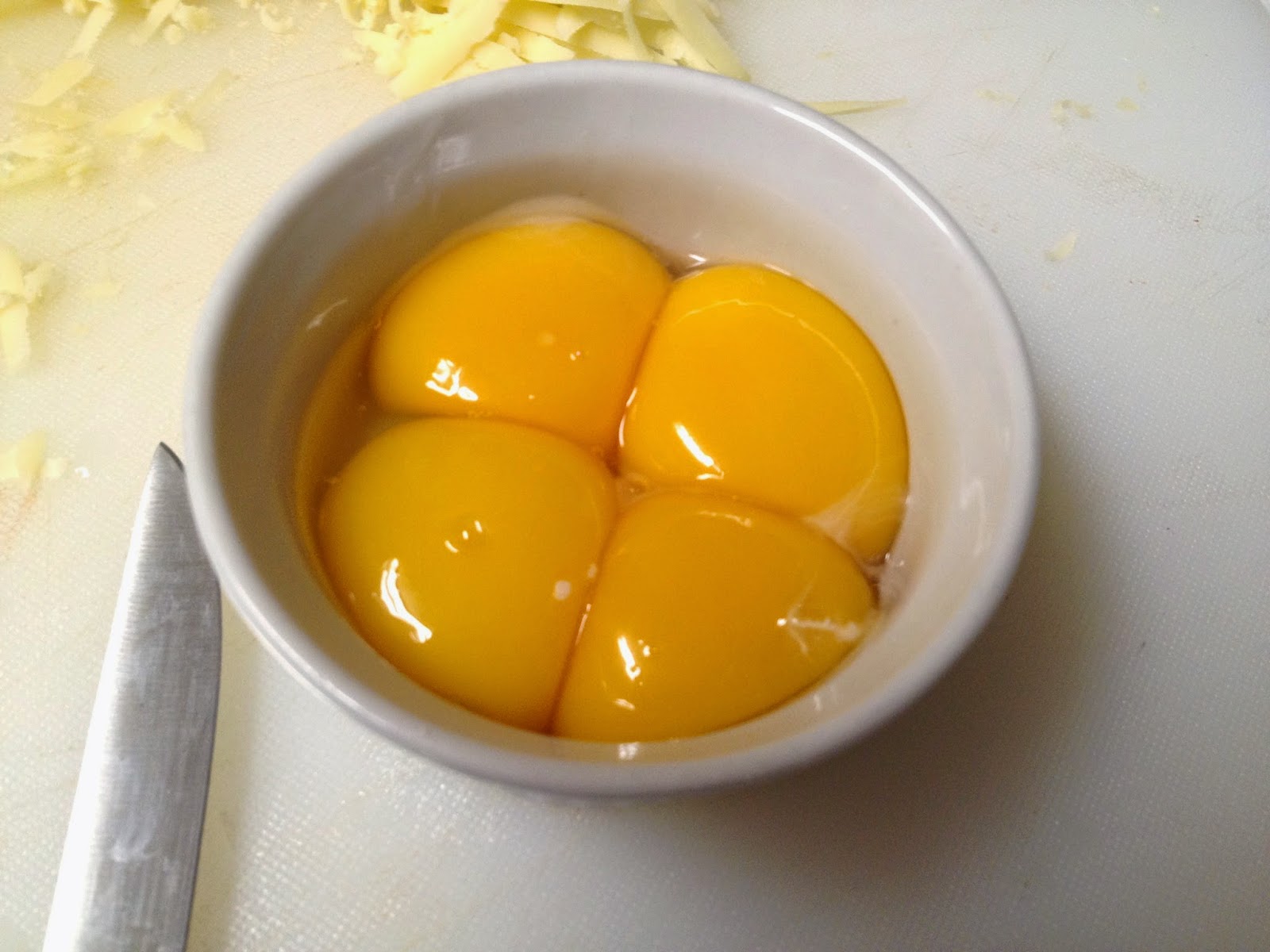 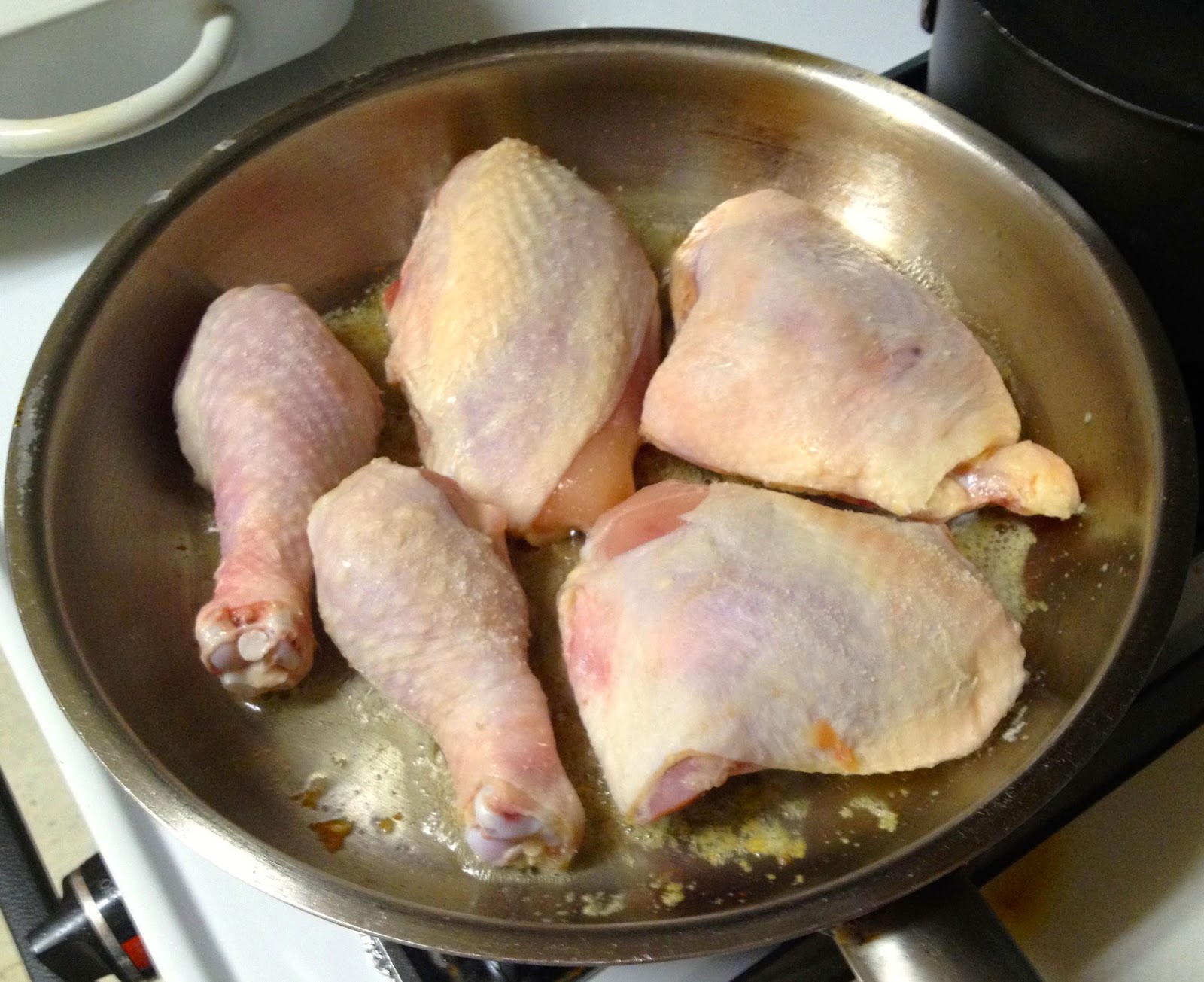 1. Heat the oven to 400° F. Salt the chicken pieces and cook them in the butter over medium heat until nearly done and lightly colored on all sides — about 20 minutes, adding the breasts only after the first 10 minutes. 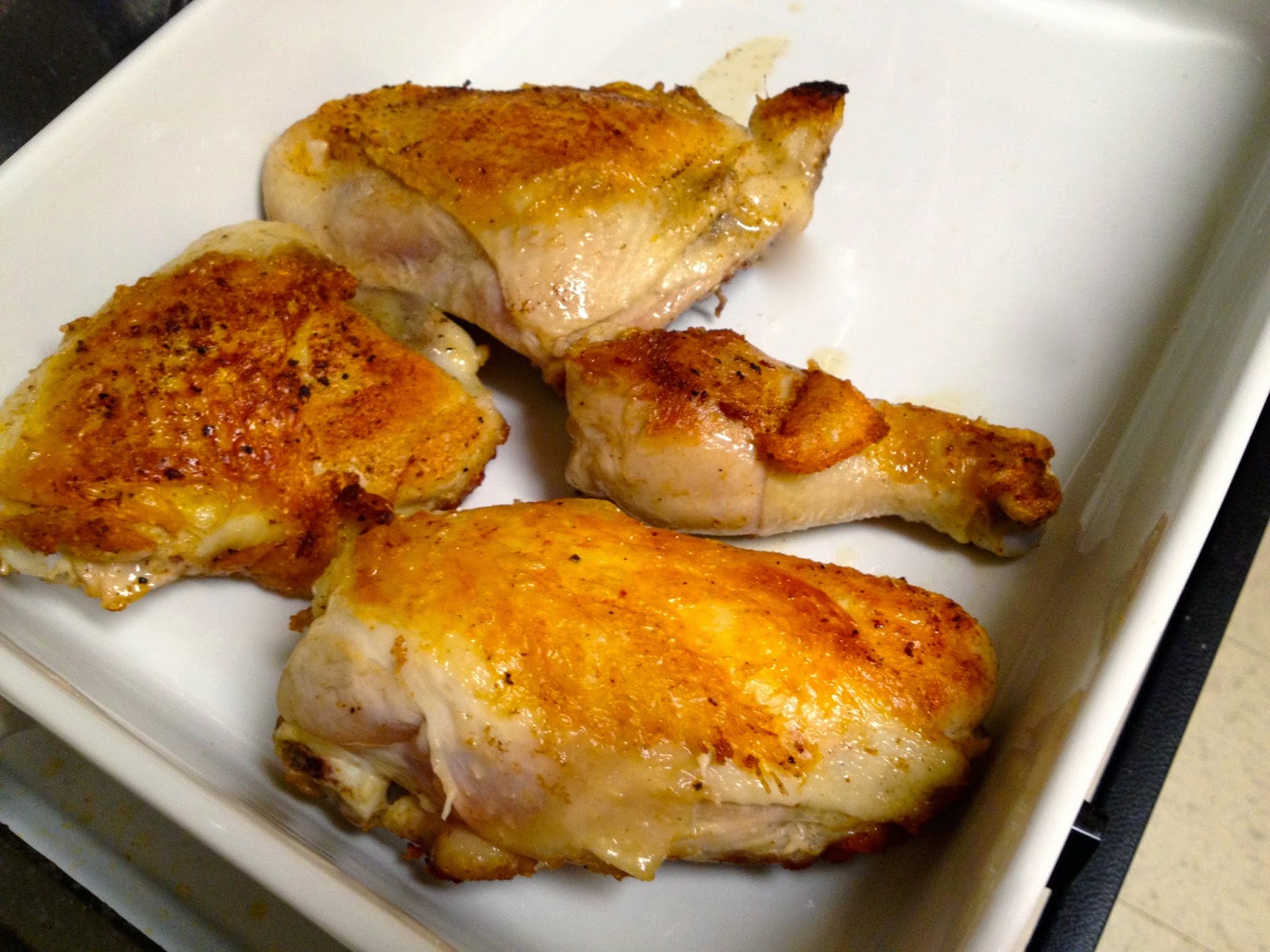 2. Transfer them to a gratin dish of a size to just hold them, arranged side by side.

In a small skillet, cook the crumbs in the butter until slightly crisp and only slightly colored — still blond, stirring. Put them aside.
Add the water to the pan to deglaze it. Let it reduce by about half. 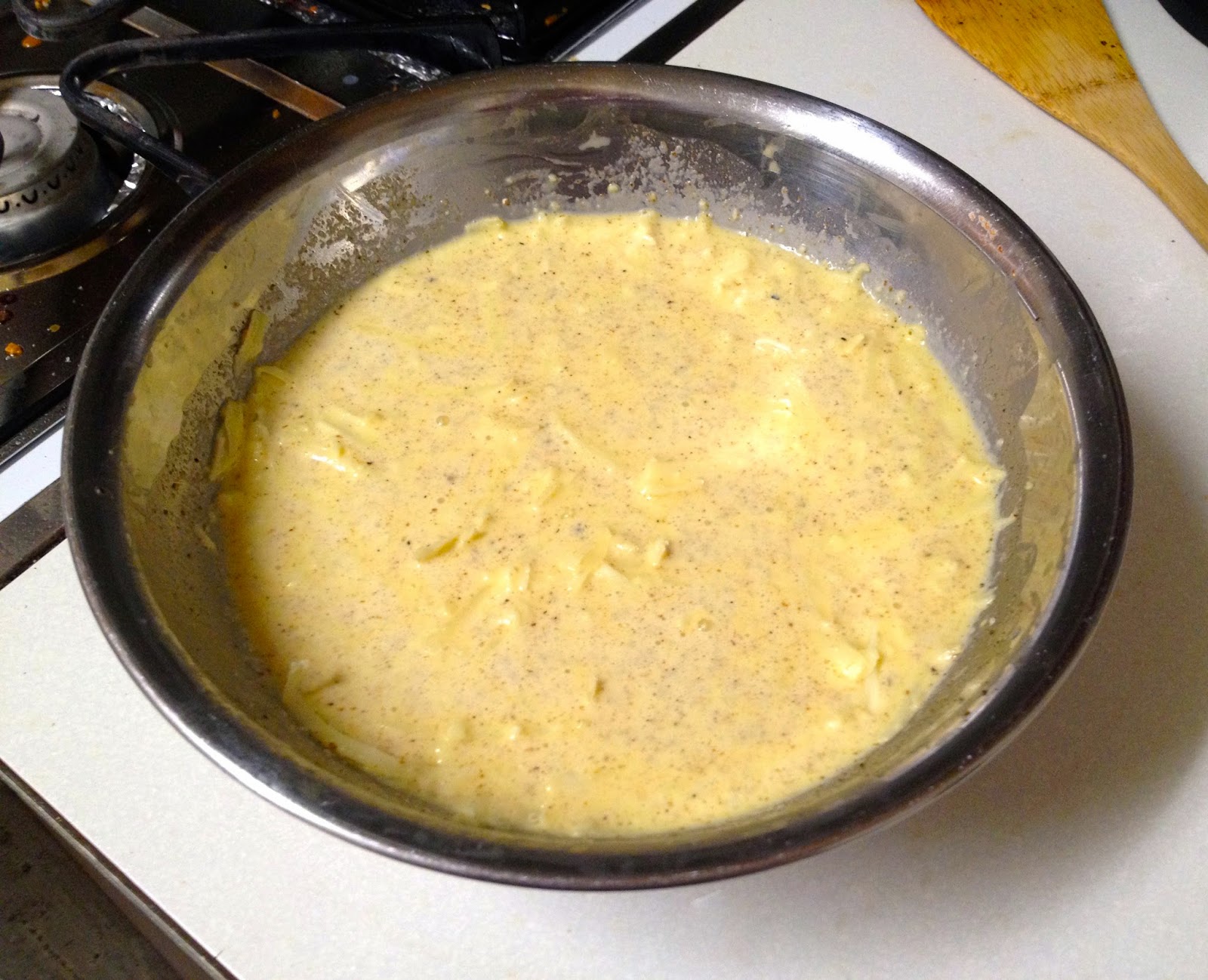 3. Whisk together the cream, egg yolks, seasonings, and cheese, the deglazing liquid. 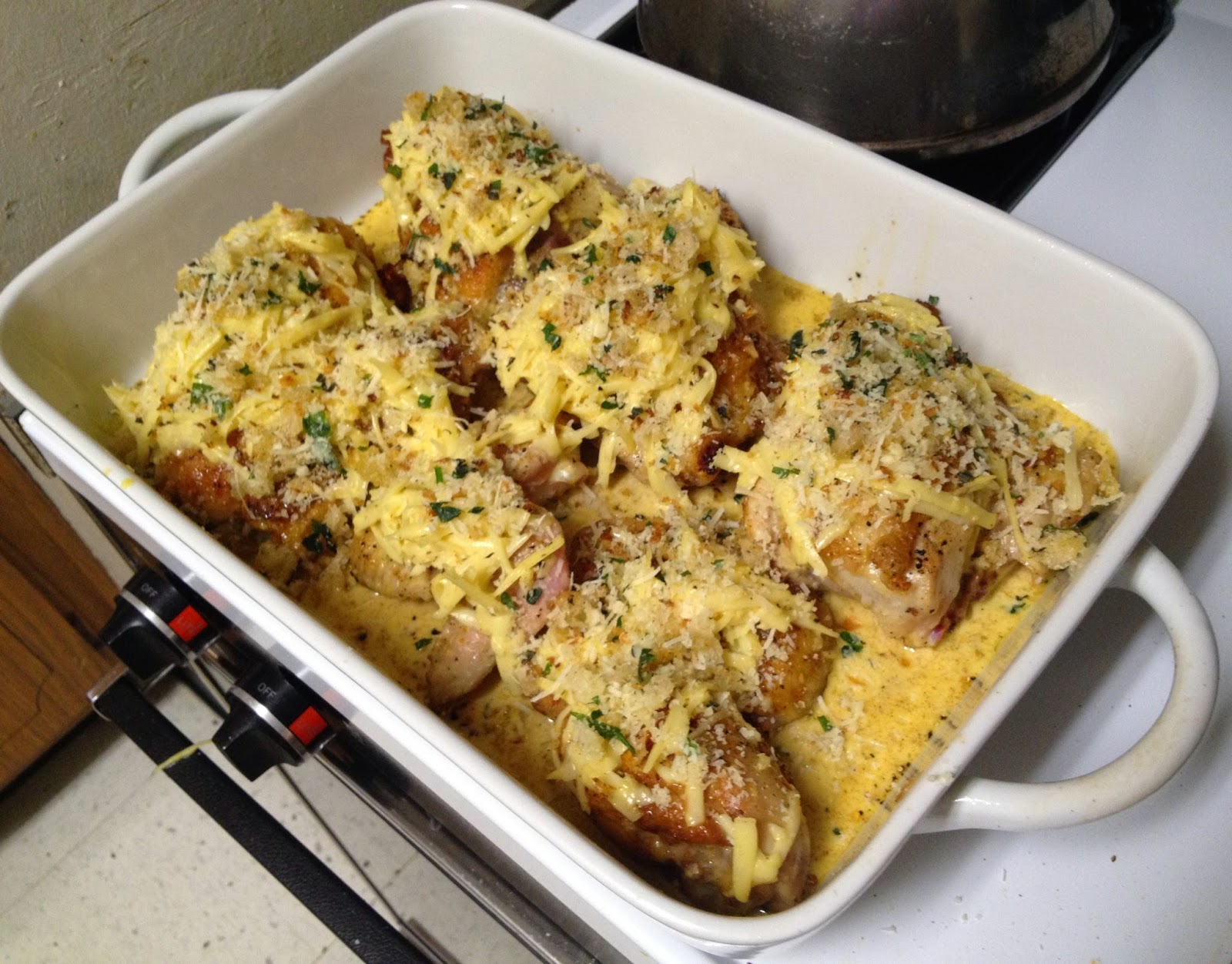 4. Spoon or pour this mixture evenly over the chicken pieces, sprinkle the surface with the breadcrumbs, and bake 20 to 25 minutes or until the surface is nicely colored and the custard is firm. 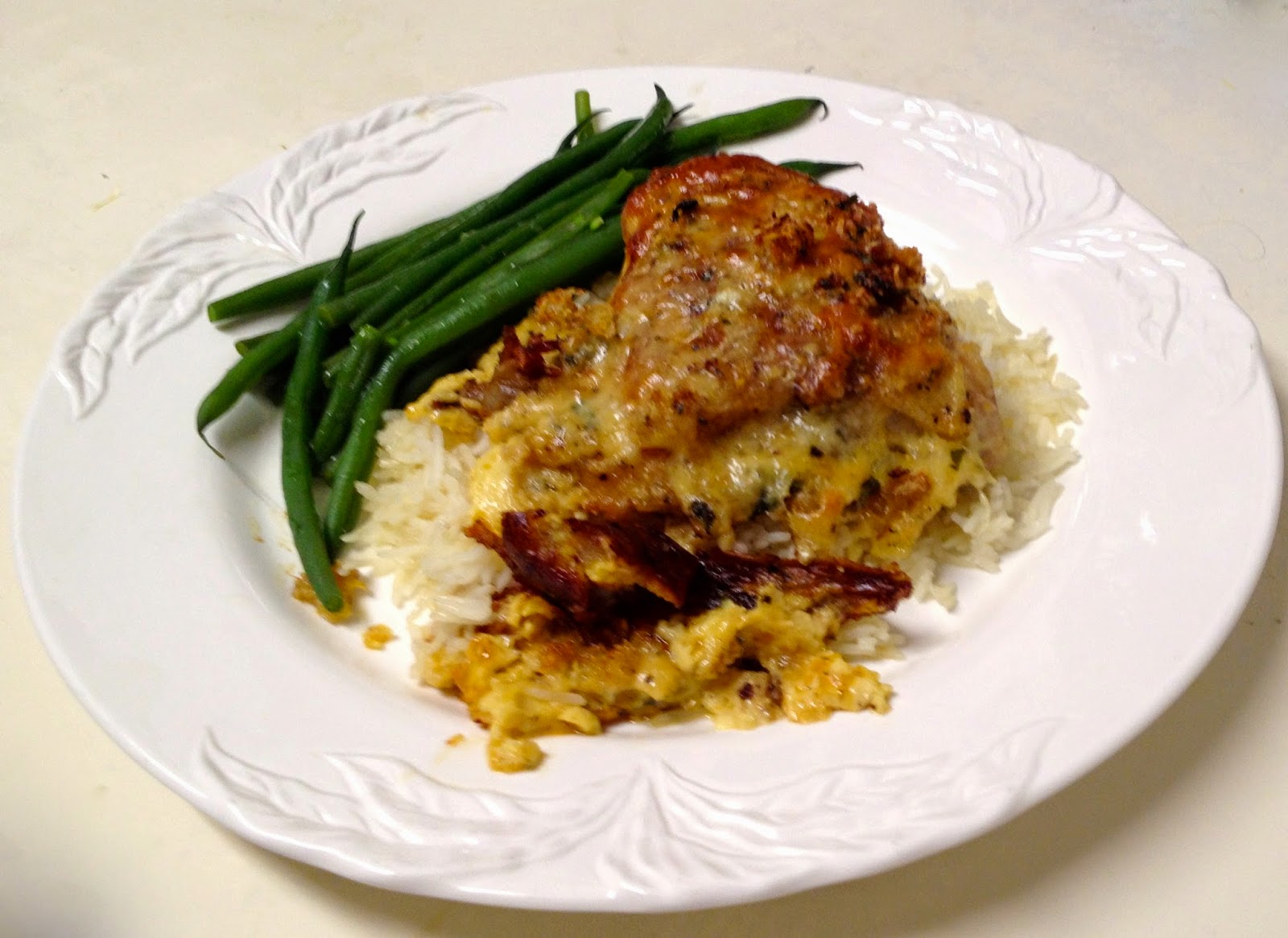 5. Serve the chicken over rice and with a side of green beans if you’d like.