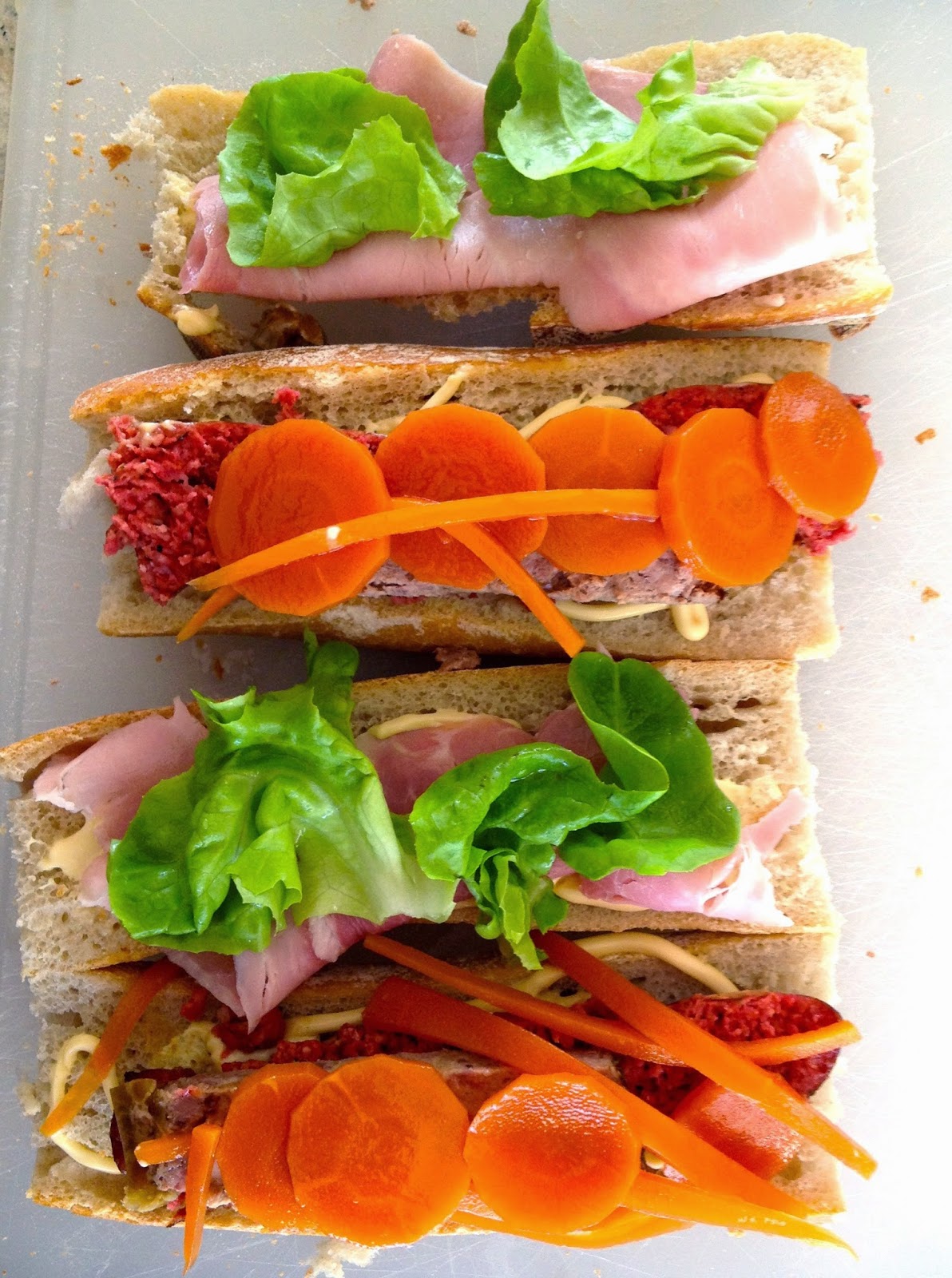 Marcus Samuelson is the Ethiopian-born chef who was adopted by his Swedish parents, Lennart and Anne Marie, in 1972 at age 2. He was orphaned when his mother died in a tuberculosis epidemic, leaving Marcus and his sister, also adopted by the Samuelssons, alone in a hospital in Addis Ababa. Marcus went to live with his new parents in Göteborg (Gothenburg).  However, it was not his mother who inspired the man to become the extraordinary chef Marcus has become. 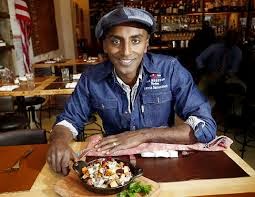 It was his grandmother or Mormor (mother’s mother in Swedish) whom he followed into the kitchen from about age 8.  She taught him the basics of great home cooking.  And there was nothing she didn’t make. Jams, pickles and bread were constantly being prepared, large cuts of meat were broken down into chops and roasts. Marcus’ childhood Saturdays were filled with helping his Mormor out in the kitchen.  Professionally , Marcus first studied at the 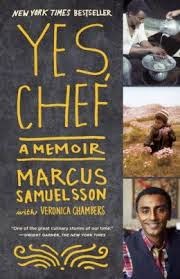 Culinary Institute in Göteberg and from there he went on to ‘stage’ in very impressive kitchens in Switzerland and Austria.  Finally, in 1991 he arrived in New York City where, in just a few years time and at the age of just 24, he became Executive Chef at “Aquavit”.  There, the Chef became the youngest ever to be given three stars by the New York Times.   You can read his fascinating story in “Yes, Chef”( Random House 2013), his memoir.  I brought and read the book with me on our most recent trip to St. Barthelemy.  And I brought a little Marcus Samuelson to the table…or more properly, I brought Mormor to the table.  And she was hardly the first Swede to contribute to the magical island. 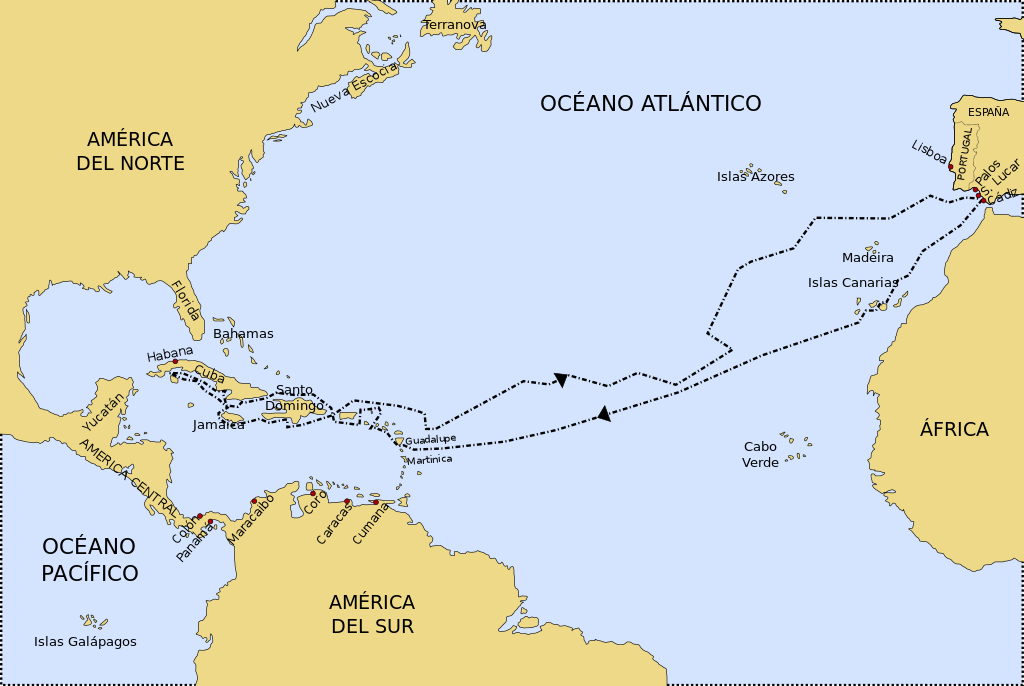 island chain of the Santa Úrsula y las Once Mil Vírgenes (the Virgin Islands), and named the islands of Virgen Gorda. He continued to the Greater Antilles, and landed on the island of San Juan Bautista, present day Puerto Rico, on November 19, 1493.  Too bad he didn’t have the smarts just to stay put on St. Barth where I am sure he could have happily retired.

St. Barth wasn’t settled until 1648, when French colonists from St. Kitts arrived only to have their settlement destroyed by Carib Indians who killed them all and put their heads on poles on what is now L’Orient Beach to discourage anyone else from coming ashore. And it was fully 107 years before anyone did.  French mariners from Normandy and Brittany created a successful colony.  French Buccaneers loved the place and its harbor, bringing in plunder they’d lifted from Spanish galleons.

The Buccaneers eventually settled down and became good citizens.  The island was too small and too rocky so that it escaped the scourge of slavery that powered the sugar plantations on larger, more verdant islands.  There was a brief British military takeover in 1758 but St. Barth remained resolutely French until 1784.   Suddenly, one of Louis 16th’s ministers sold the island to, ta-da, Sweden (!) in exchange for trading rights in the port of Gothenberg, Marcus Samuelsson’s hometown!  St. Barth became, and still is, a free port.  Sweden gave Gustavia its name and much later the name of its airport, Gustaf III . It celebrates another Swedish King on the Rue de Oscar II.  For 100 years it remained in Swedish hands until it was bought back by France in 1878. Whether Marcus Samuelsson’s Mormor would feel at home on this intensely French island is questionable. But I know for sure that Mormor’s instructions on how to pickle made an unforgettable sandwich, a Vietnamese-inspired Banh Mi. 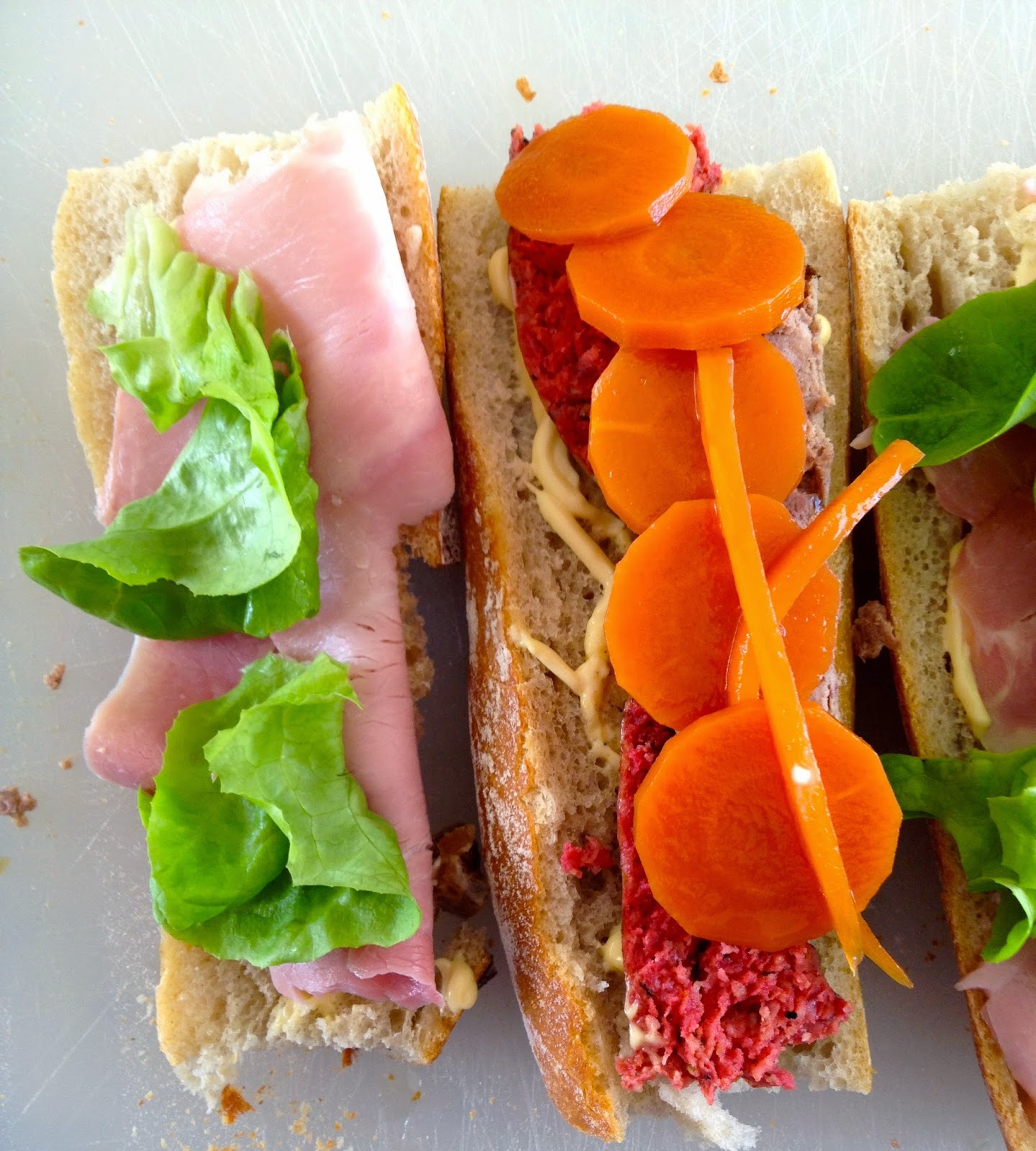 And what is a Banh Mi?  The actual translation of Banh Mi is the Vietnamese term for all kinds of bread.   During the French colonial period, the baguette was introduced into the country.   As it is most commonly made in Vietnam, the baguette is a single serving loaf making it ideal for making sandwiches of any kind.   There’s basically nothing you can’t put into a Banh Mi.   The list of fillings includes steamed, pan-roasted or oven roasted seasoned pork belly, Vietnamese sausage, grilled pork, grilled pork patties, spreadable pork liver pate, grilled chicken, canned sardines in tomato sauce, soft pork meatballs in tomato sauce, head cheese, fried eggs and tofu.  But to these ingredients, a true Banh Mi needs at least some fresh cucumber slices, cilantro, pickled carrots and or shredded daikon.   To those ingredients, the condiments are also used: spicy chili sauce, sliced chilies, mayonnaise and cheese.  With that treasury of fillings and vegetables and condiments, you can pretty well put anything into them.  Our preference is for cooked sausage and a piece of ham topped with a slice of paté which is then topped with pickled carrots and sliced jalapenos (if we have them).  And to whom do we turn for our pickled carrot recipe than Marcus Samuelsson’s Mormor. 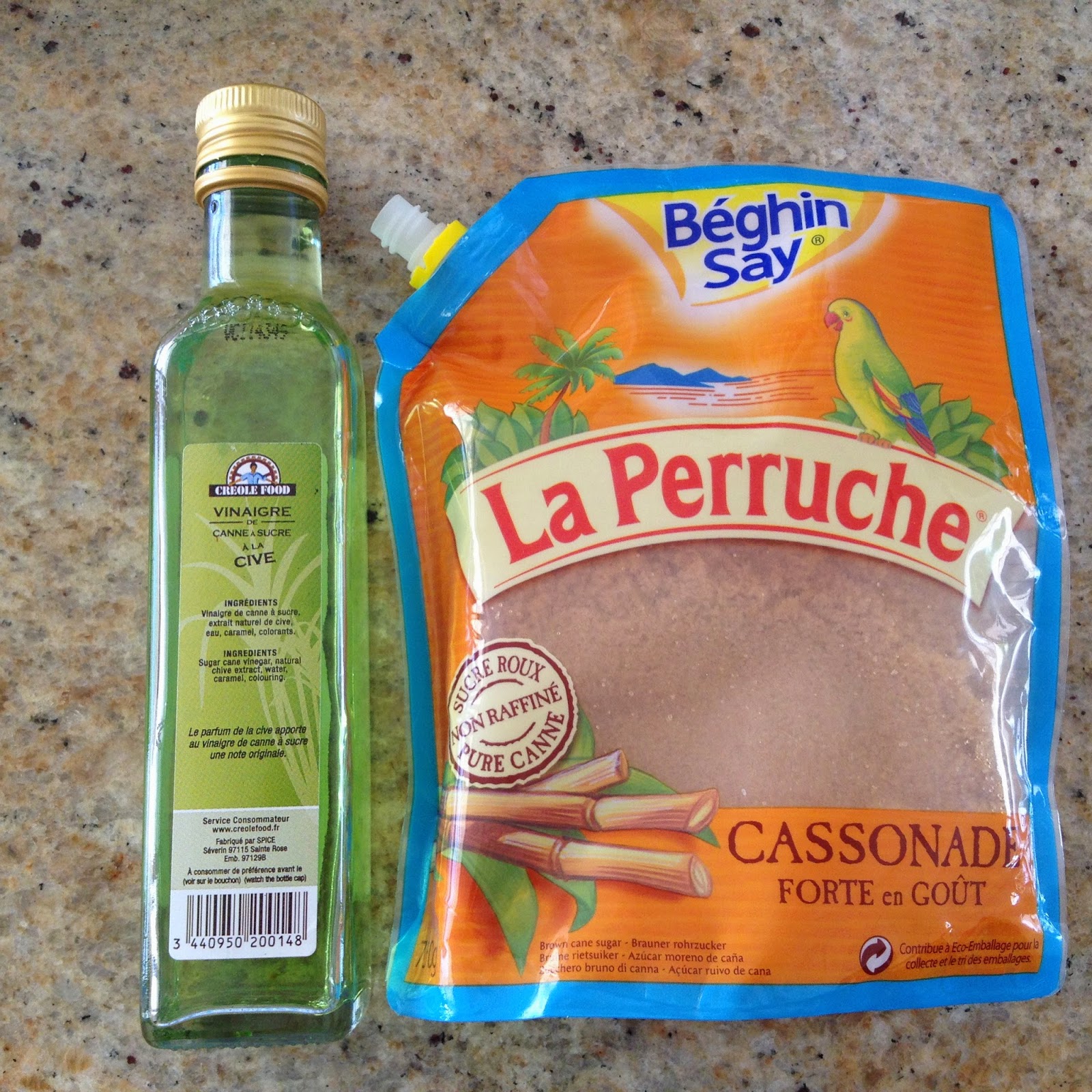 In all honesty, this is not a pickle that Mormor would have produced.  But it uses her admonition of a 1-2-3 solution. 1 Part vinegar, 2 parts sugar, 3 parts water.   In Sweden the vinegar would be ättika, which is beechwood based vinegar known for its sinus clearing properties. The sugar would likely have been white.  And the water straight from the tap.   In St. Barthelemy, there was no ättika to be had.  Instead I went for a Canne de Sucre (Sugar Cane) vinegar that was seasoned with scallions (Cive).  I also used the ‘sugar in the raw’, unrefined sugar which is common on the island.  Finally, I went with bottled water just because that is what we drink.  The results were remarkable.  A sweet and sour pickle that looked beautiful, tasted remarkable and made a perfect Banh Mi.  Here’s the recipe: 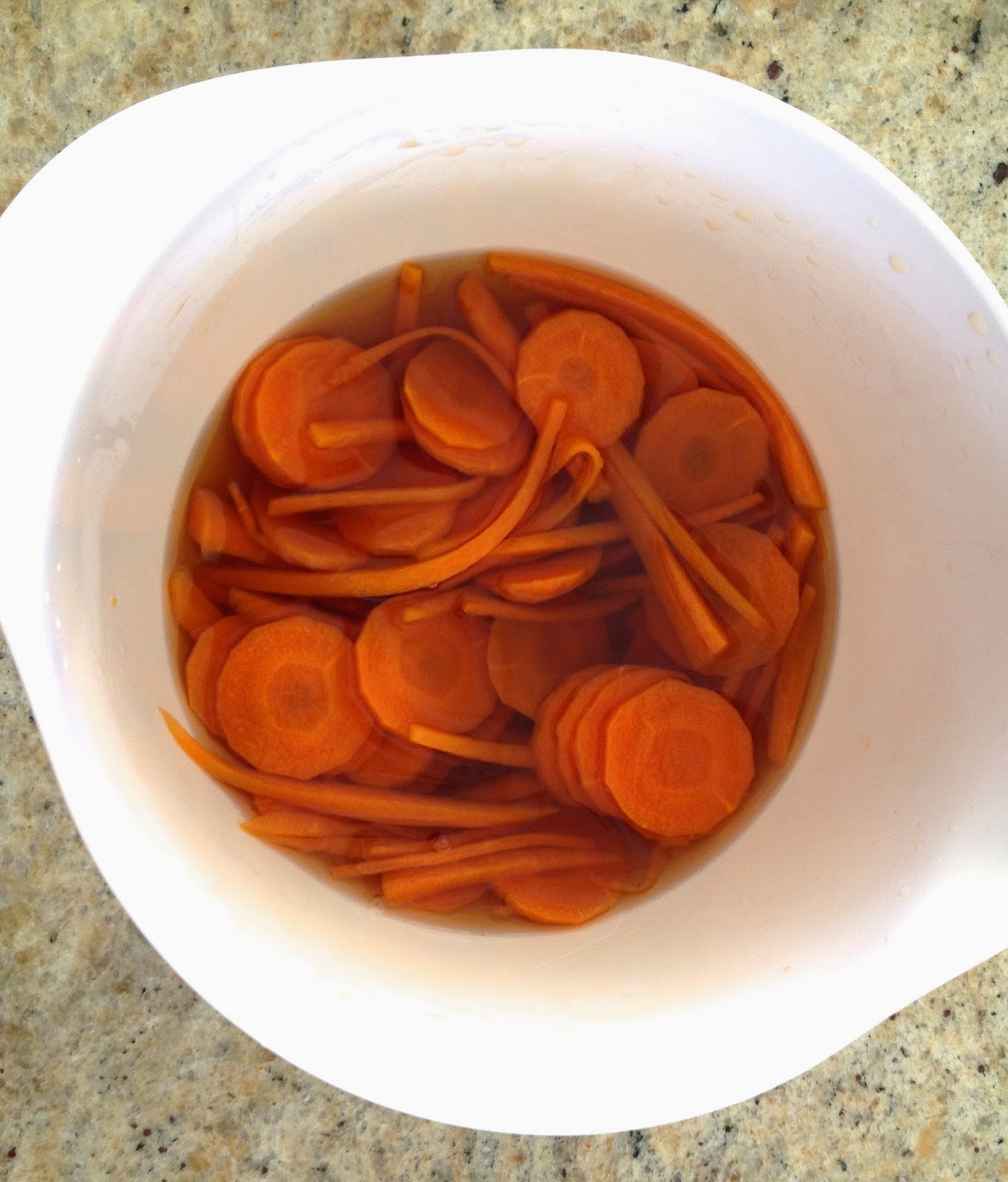 1 cups of Vinegar (your choice)
2 cups sugar in the raw
3 cups water.
In a small saucepan, combine the vinegar, sugar and water. Bring to a boil.  Add the carrots. Reduce the heat and simmer for 15 minutes.
You can store the carrots in their liquid. They’ll keep for weeks.
Author: Monte Mathews
Filed Under: Banh Mi Sandwich, History of St. Barth, Marcus Samuelsson, Marcus Samuelsson's Mormor's recipe for Pickles, Pickled Carrots, St.Barthelemy, Swedish St. Barths
Direct from St Barth via Vietnam: The Banh Mi Sandwich
Our annual round-up of our annual trip to St. Barthelémy has been published…Bon Voyage!