Have you ever visited Food52.com?  It’s the brainchild of former New York Times Food writer, Amanda Hesser and her partner, Merrill Stubbs, a Brown University and Cordon Bleu grad who worked with Amanda on “The Essential New York Times Cookbook” (The New York Times Company 2010). The site is characterized by exquisite photography –especially of its carefully curated “Provisions” area where Food52 sells an intriguing and artful collection of housewares and pantry items.  It’s a full on-line community which actively requests recipes from its audience.   There are any number of contests to enter and readers select “Community Picks” of their favorites.  It was there that I found today’s recipe. As I often do, I started a recipe search with one ingredient in mind and one hope: to discover something hearty to do with chicken thighs for that cold night’s dinner.  And boy, did I find

it. Its creator, Bogre, who describes himself as a ‘library acquisitions specialist, bartender and District of Columbian’, is a significant Food52 contributor who has won one contest, been a finalist in another and has 5 “Community Picks” to his name. “Bogre”, I was to discover, is a specific type of mug in Hungary.  Not being fluent in the language and relying on a web translator, it appears that a “Bogre” is also used as a measuring cup.  At any rate, Bogre’s Hungarian credentials are pretty well summed up in his screen name.  That and his use of that most Hungarian of all ingredients. 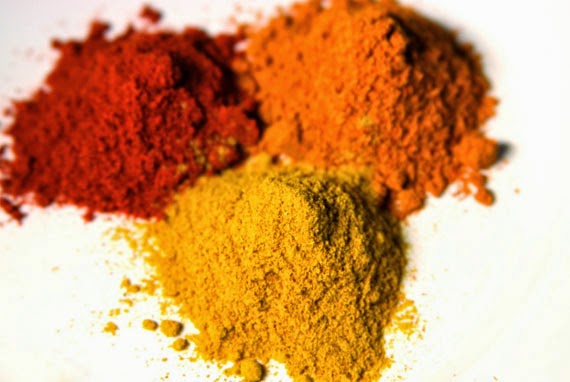 “Holy Paprika”, Food52’s editor exclaimed, as the dish contains 3 different paprikas that achieve a depth of flavor that’s matched only by the rich red color of the stew.   It’s a complete winner that may take a little too much time on a weeknight (it spends an hour and a half in the oven) but strikes me as the perfect thing to cook on the weekend and re-heat any night of the week.  Because once it’s cooked, all you need do is to cook some egg noodles or rice to ladle the stew over and dinner is done.  It bears some resemblance to Chicken Paprikash which is likely the only Hungarian dish that any Americans can name. But Chicken Paprikash or Paprikás Csirke calls for boneless, skinless chicken thighs.  Bogre’s recipe wants the bone-in and the skin on for his dish.  I keep two Paprikas in the spice rack: Sweet Paprika and Smoked Paprika.  But I happily bought the third Paprika, Hot Paprika, that’s called for here.  The only other snag in the recipe is the call for Porcini Mushroom powder.  Since there’s all of teaspoon of the stuff in the recipe, I don’t think I missed it.  I used more cremini mushrooms than called to compensate.   There’s an optional use of a half cup of sour cream, blended with some flour to temper it, that goes in at the very end.  But if you fear curdling your perfect stew, you can serve that on the side.  Here is the recipe: 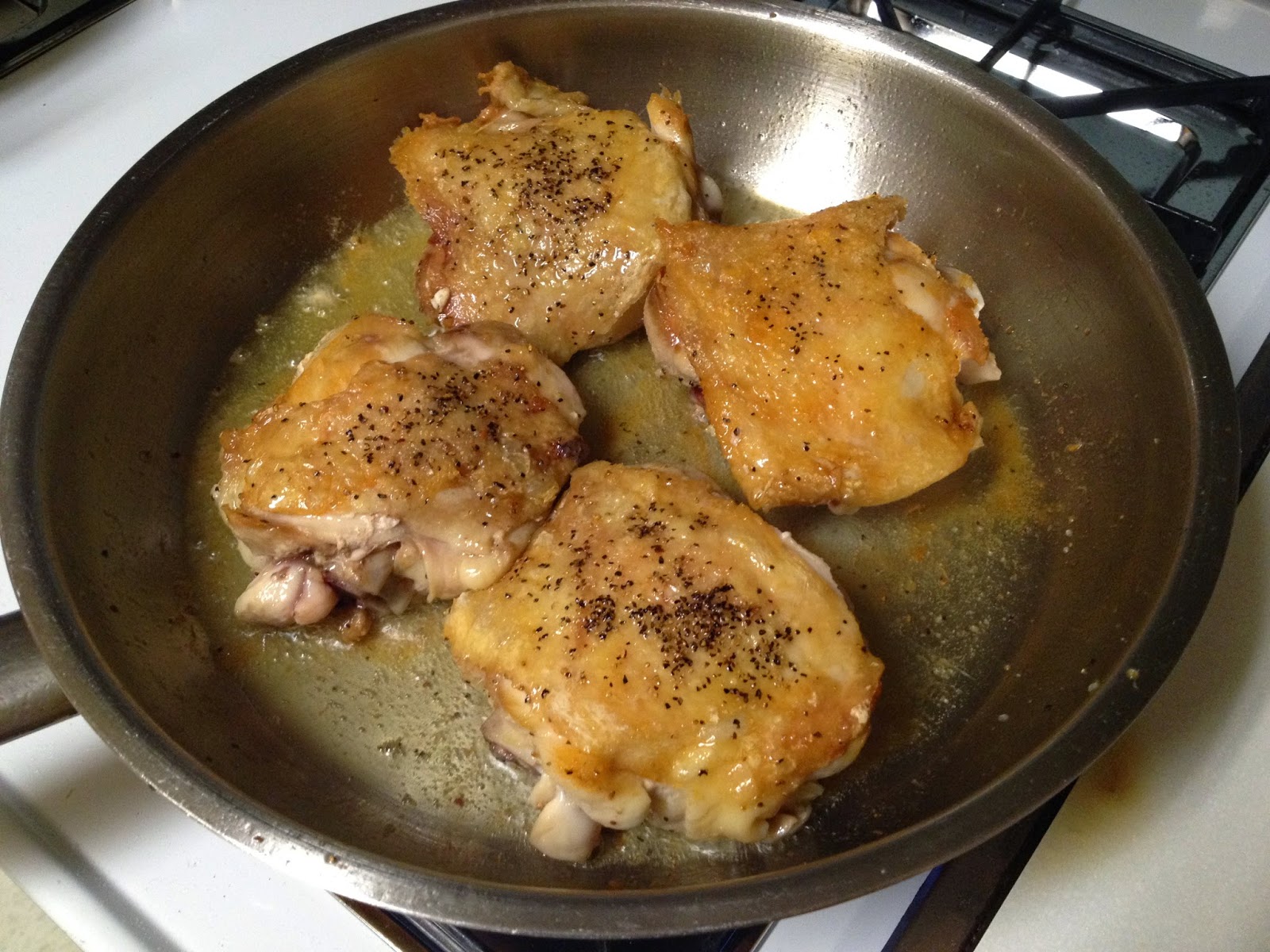 1. Heat oven to 325° F. Season the chicken thighs on both sides with salt and pepper. Heat fat in a large, oven-safe sauté pan or Dutch oven. Brown the thighs in batches, about five minutes per side. Remove chicken to a plate and cover with foil to keep warm. 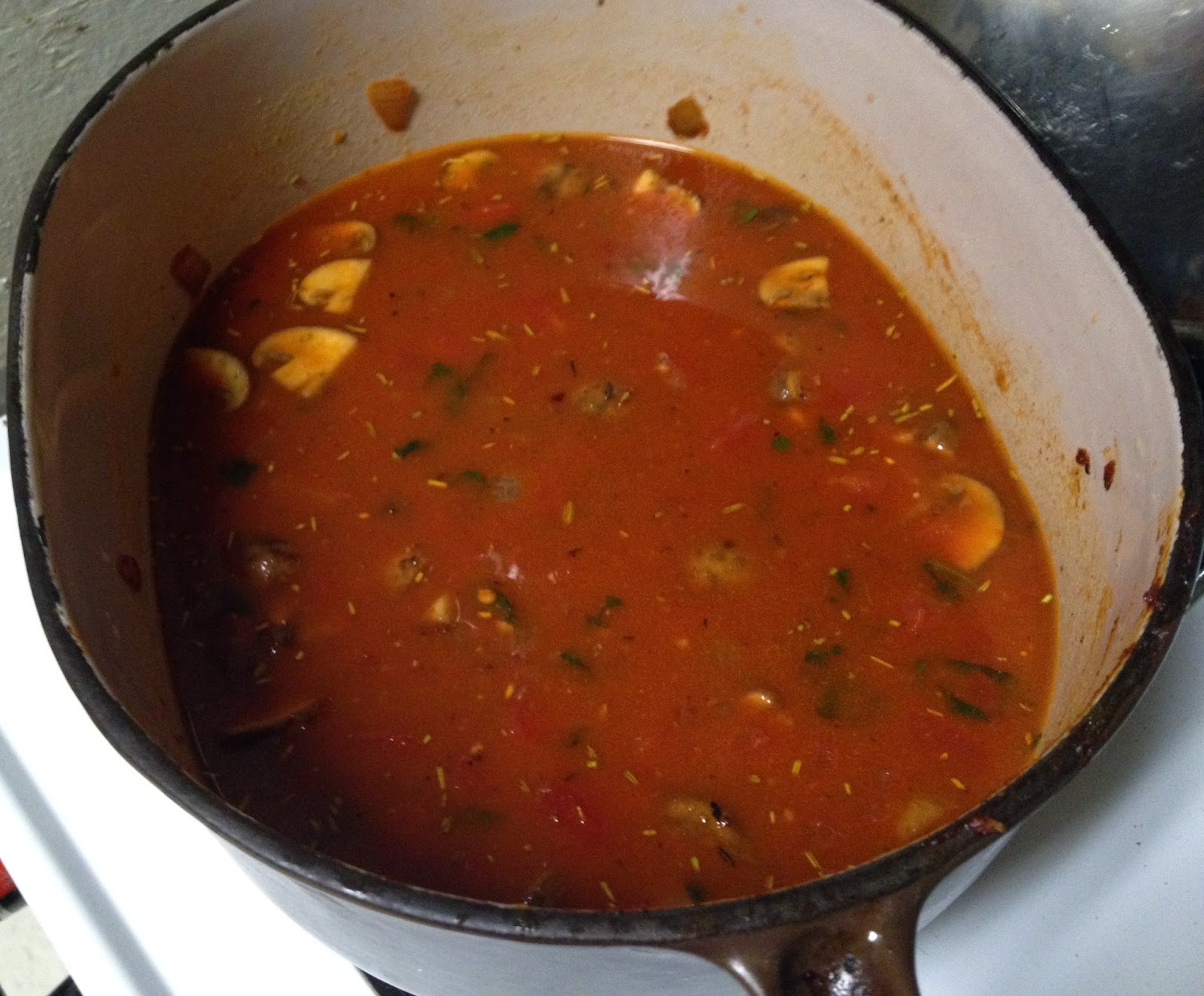 2. Discard all but 2 tablespoons of fat from the pan, lower the heat slightly, and add the onions. Sauté until tender and translucent and starting to brown. Add the mushrooms and cook a few minutes more, until they begin to brown as well. Add the garlic and sauté until fragrant, about 30 seconds, then add the paprika (all three), the porcini powder, and the rest of the herbs and spices. Cook, stirring, about a minute, being careful not to let the paprika scorch. Deglaze with wine, stirring to scrape up any browned bits, and cook until mostly evaporated. Add tomatoes and broth and bring to a boil, then lower the heat to a simmer. 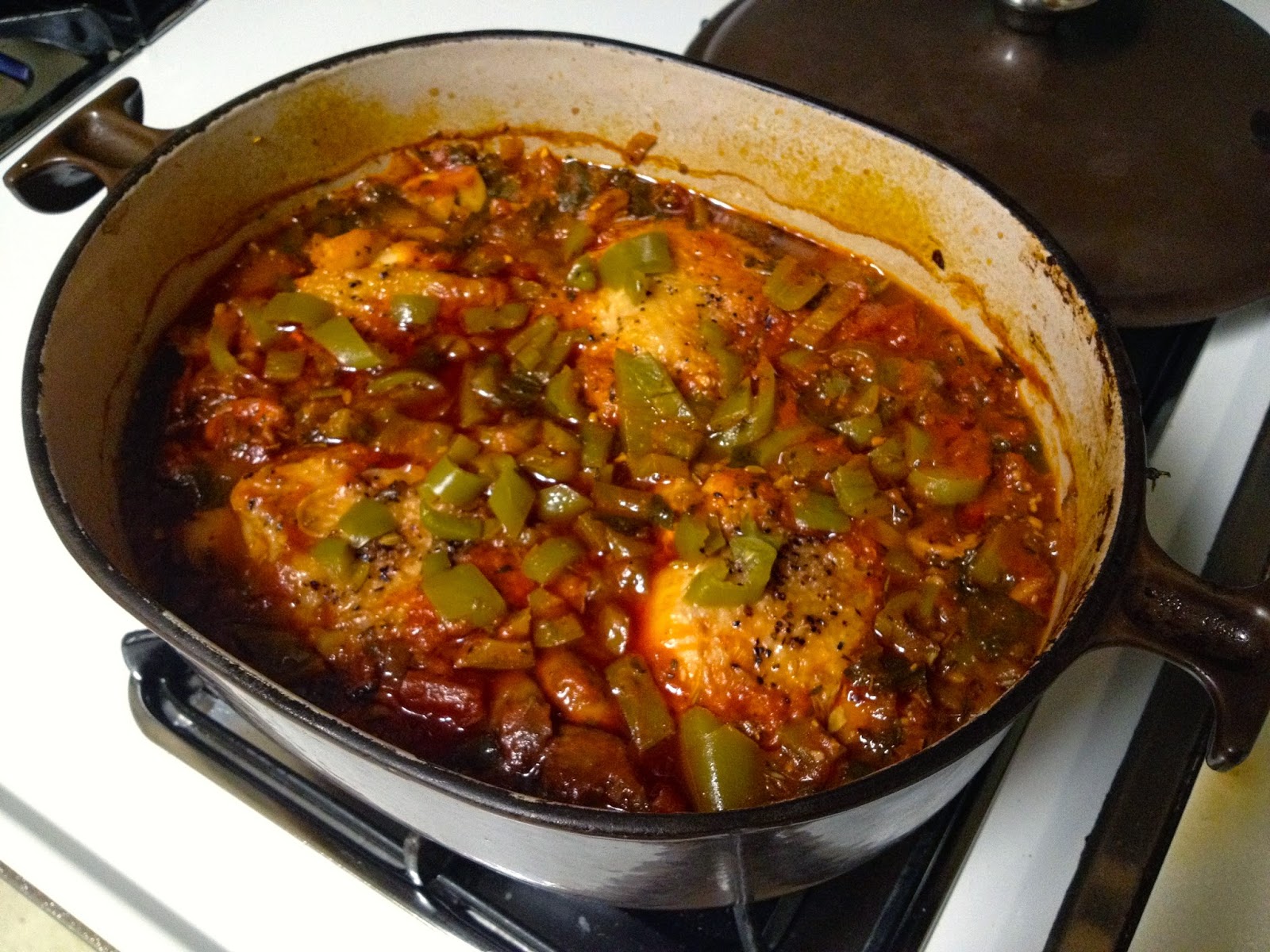 3. Return the chicken to the pan, nestling the thighs skin-side up in the sauce, and scatter the peppers over everything. Cover, place in the oven, and cook for 1 1/2 hours, or until the chicken is falling-off-the-bone tender.

Remove the pan from the oven. Remove the chicken to a plate and allow to sit until cool enough to handle. Meanwhile, return the pan to the oven, uncovered, and let the sauce cook down for another half hour while the chicken rests. (Alternatively, you can do this over a low flame on the stovetop.) When the chicken is cool enough to handle, remove and discard the skin, bones, and gristle. Roughly shred the meat by hand, return to the sauce, and heat through. Season to taste with salt and freshly ground pepper. If using sour cream, put it in a heat-proof bowl, mix in the flour, and then stir in some of the sauce, a few spoonfuls at a time, to temper the cream. Then pour the cream mixture back into the pan, stir to incorporate, and gently heat through, long enough to cook off any raw flour taste and thicken the stew slightly, but taking care not to let it boil. 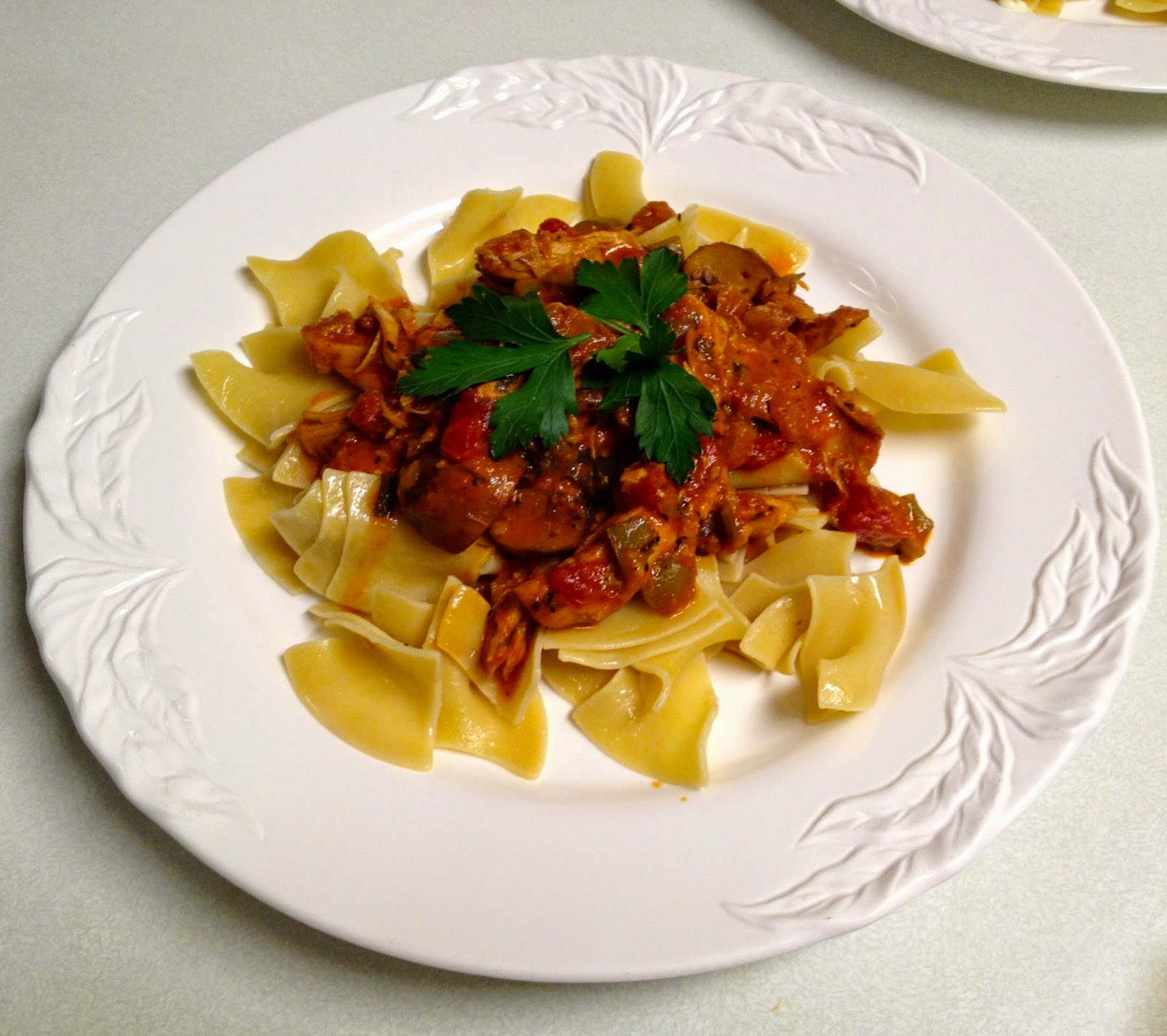 4. Serve stew over noodles, spaetzle, or root vegetable purée, or just eat as is, garnished with some chopped fresh parsley and a sprinkle of sweet paprika, with a nice loaf of freshly baked, crusty rye bread.