The moment the thermometer drops below 60 degrees, I cannot wait to put some Indian food on the table.  This makes very little sense since the average temperature on the Indian sub-continent is 65.5 degrees.  And in Delhi, where this recipe was invented, the average is 77.4.  But I wait to serve Indian comfort food once summer is over. And I could not wait to serve this outstanding example of wonderful Indian cooking. Outside of India, this recipe is called Chicken Tikka Masala.  It may surprise you to know that this yogurt and spice-marinated dish with its onions, ginger and tomatoes scented with cumin, turmeric, cinnamon and garam masala has only recently been deposed as Britain’s most popular dish. (It was replaced by Chinese stir frys.)  There are, of course, dozens of variations of this classic, whose origin dates from the 1940s. It was first served at a restaurant which itself was a first.  According to Suvir Saran in “Indian Home Cooking” (Clarkson Potter 2004), Moti Mahal (The Palace of Pearls) was India’s first, real sitdown restaurant where, when India gained its independence from Britain, Indians of all classes could enjoy a sit-down meal indoors.  From its kitchen came the first Butter Chicken, which, by the way, is what the dish is always called in India.  And Butter Chicken, by the way, is not swimming in butter although it does use a quarter pound of the stuff.

Sam Sifton devoted a recent Sunday Times Magazine column entirely to Butter Chicken.  The recipe that he featured however was not even the Indian original. It came from a restaurant called Attica in, of all places, Melbourne, Australia, where it was developed by a young cook responsible for the staff meal.  A Swedish photographer called Per-Anders Jorgensen included it is his collection of photographs of restaurants around the world, “ Eating with the Chefs” (Phaidon 2014). Now if this does not show just what an International classic Butter Chicken is, what will?   I could not wait to make it but I thought I’d check in with Suvir Saran and see how the Australian version aligned with the genuine article.  The result is the recipe that I’m sharing with you today. 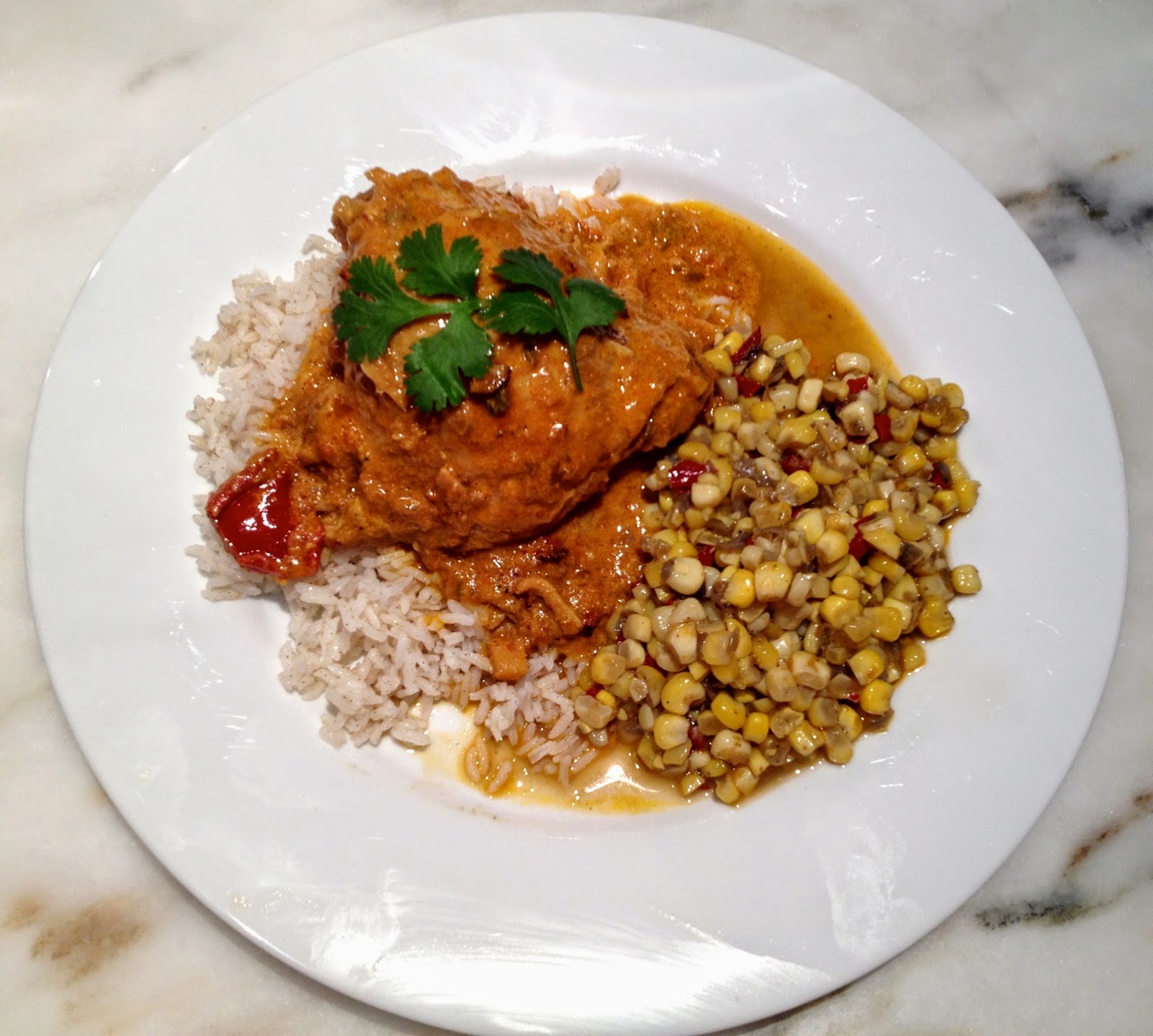 I followed Sam Sifton’s ingredients to the letter.  Where I digressed were in some of Suvir’s techniques.  The result was an intensely luxurious dish which I served with Coriander Rice and, because I had it on hand, some Confetti Corn (see post immediately before this one for the recipe) to which I added a tablespoon of good old Curry Powder.  My guests loved the dish and vowed it make it themselves. Their only concern was whether they could find the key ingredient, Garam Masala at their winter home in Miami.  I happy to say that the Epicure Market at 1656 Alton Road, Miami, has it! (This discovery took all of 2 minutes on Google so I am sure you will have similar success if you live anywhere else).  This recipe is not at all complicated.  However, I would recommend making the marinade and using it on the chicken overnight then proceeding with the rest of the cooking the day you are going to serve it.  Suvir recommends marinating a minimum of an hour but I think that is pushing it.  The other departure between Suvir’s recipe and Sam’s is that Sam uses chicken thighs and Suvir boneless chicken breasts.  Sam never mentions whether the thighs are skinless but virtually all Indian chicken dishes use skinless chicken.  I thought I detected some skin in Sam’s photo and since I am a thigh lover and believe chicken skin is a delicacy, I went with full on and loved the results.  As did my guests.  Here is the recipe:
Recipe for Butter Chicken adapted from Sam Sifton and Suvir Saran:
1 ½ cups full-fat Greek yogurt
2 tablespoons lemon juice
1 ½ tablespoons ground turmeric
2 tablespoons garam masala
2 tablespoons ground cumin
3 pounds chicken thighs, on the bone
¼ pound unsalted butter
4 teaspoons neutral oil, like vegetable or canola oil
2 medium-size yellow onions, peeled and diced
4 cloves garlic, peeled and minced
3 tablespoons fresh ginger, peeled and grated or finely diced
1 tablespoon cumin seeds
1 cinnamon stick
2 medium-size tomatoes, diced
2 red chiles, like Anaheim, or 1 jalapeño pepper, seeded and diced
Kosher salt to taste
⅔ cup chicken stock, low-sodium or homemade
1 ½ cups cream
1 ½ teaspoons tomato paste
3 tablespoons ground almonds, or finely chopped almonds
½ bunch cilantro leaves, stems removed. 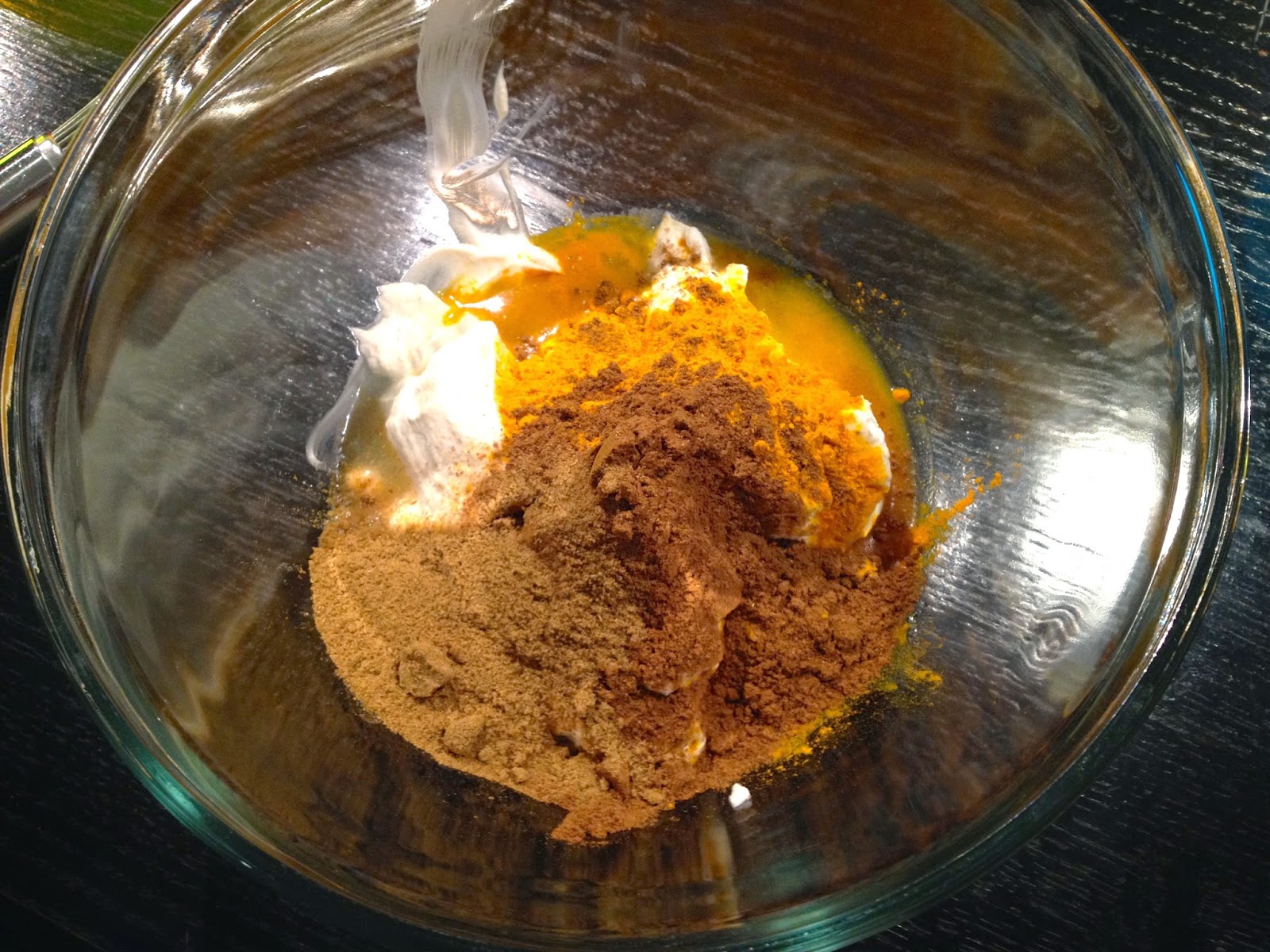 1. Whisk together the yogurt, lemon juice, turmeric, garam masala and cumin in a large bowl. 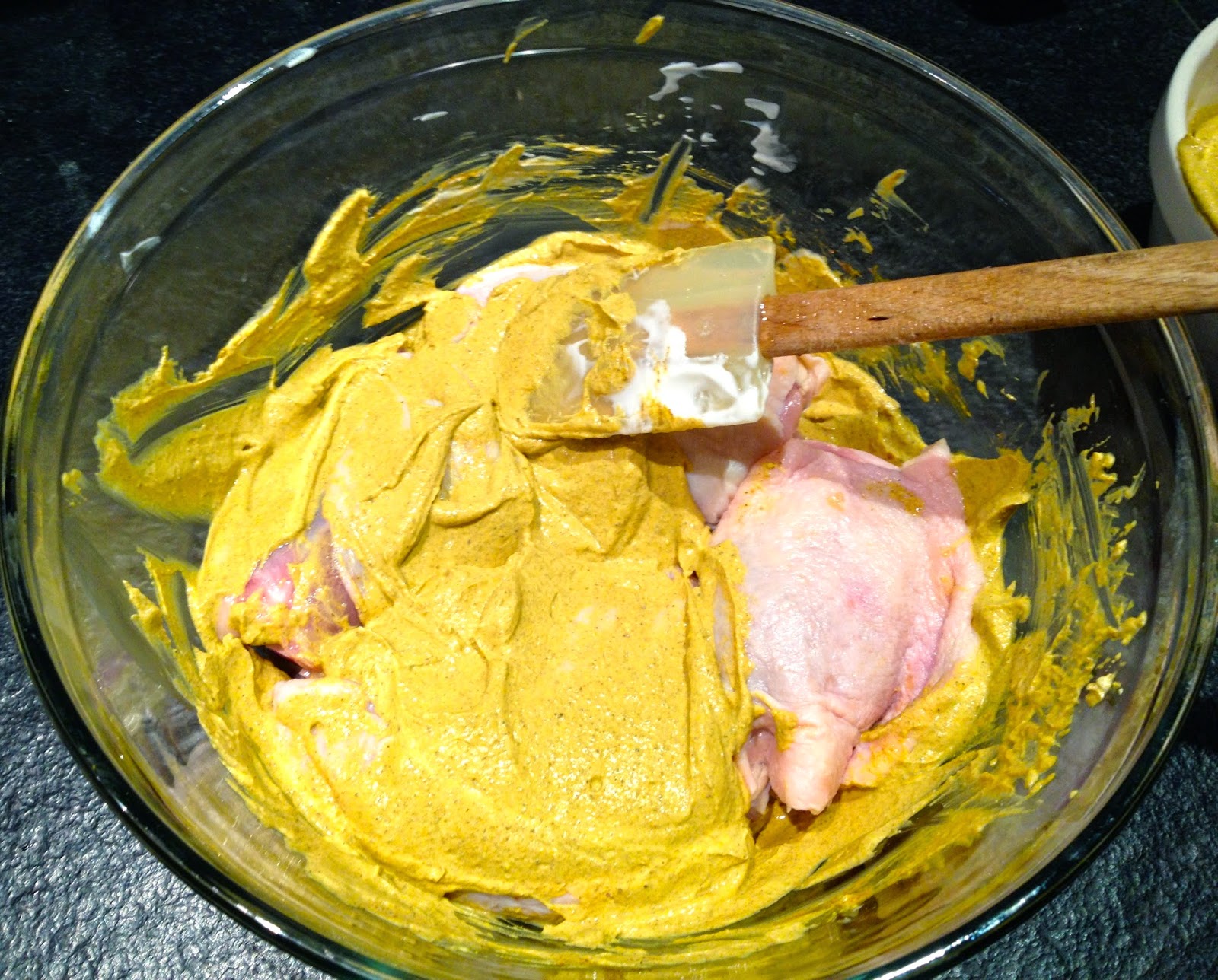 2. Put the chicken in, and coat with the marinade. 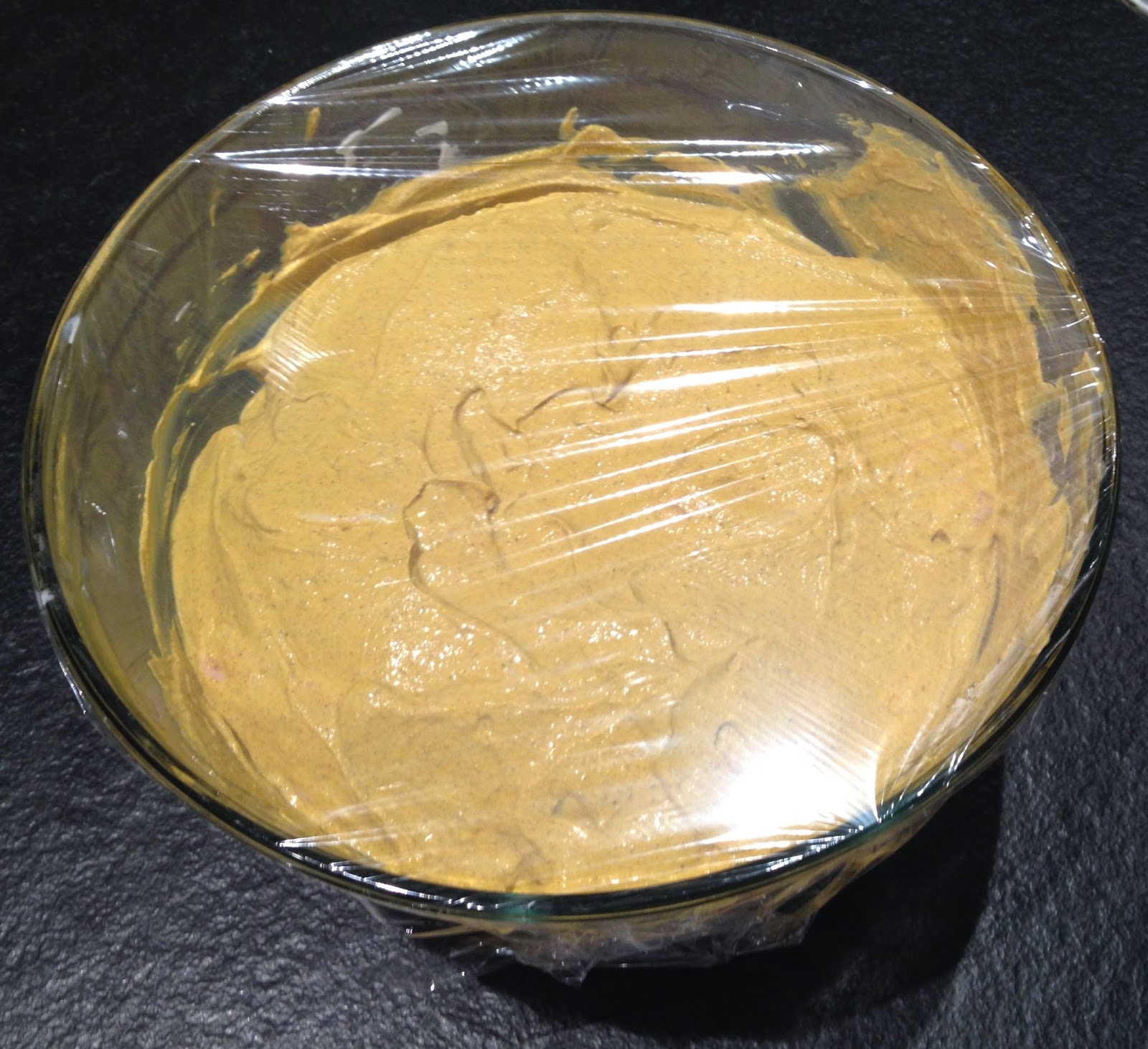 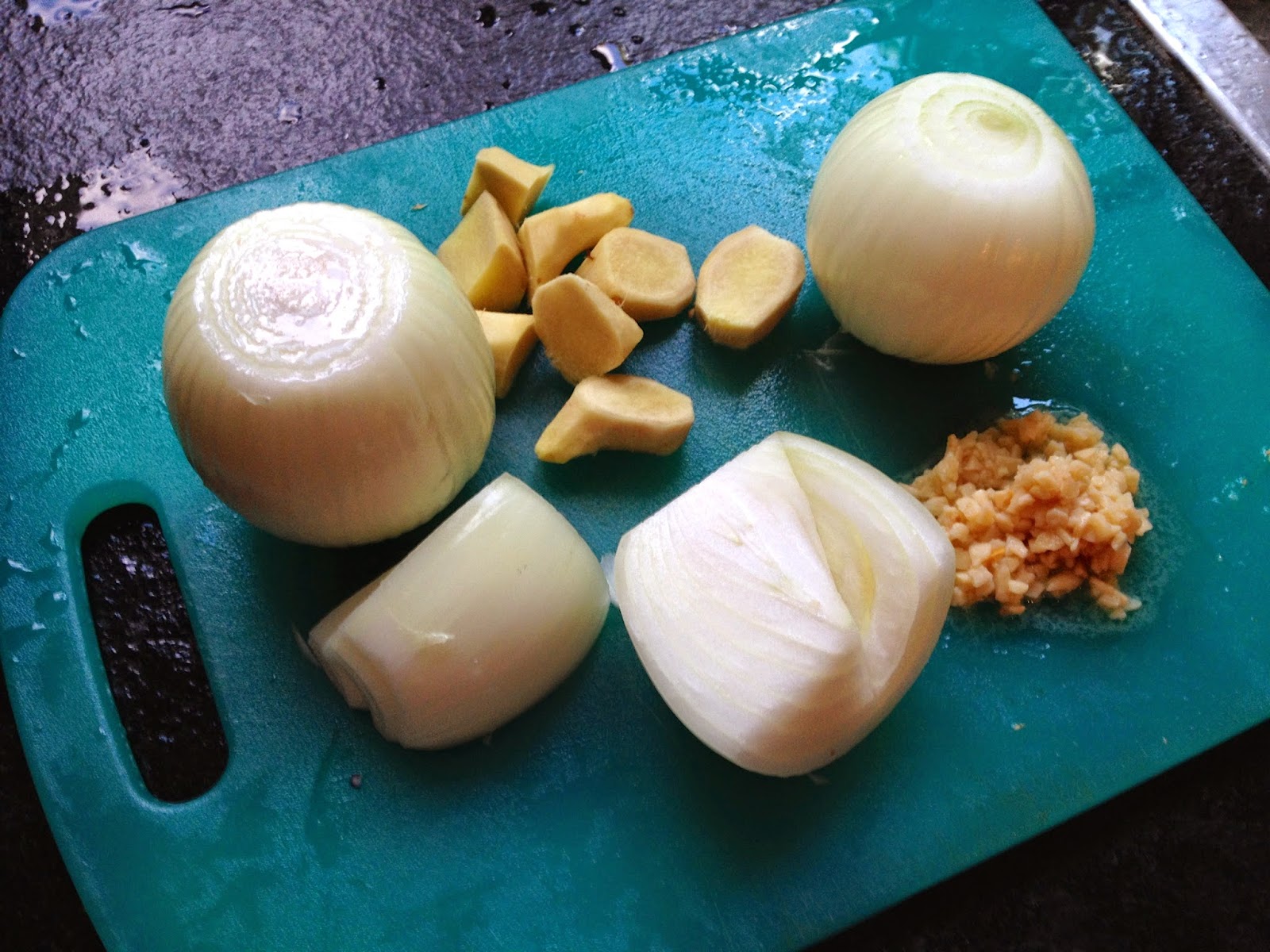 4. In the bowl of a food processor fitted with a steel blade, finely chop the onion, garlic, ginger and cumin seeds. 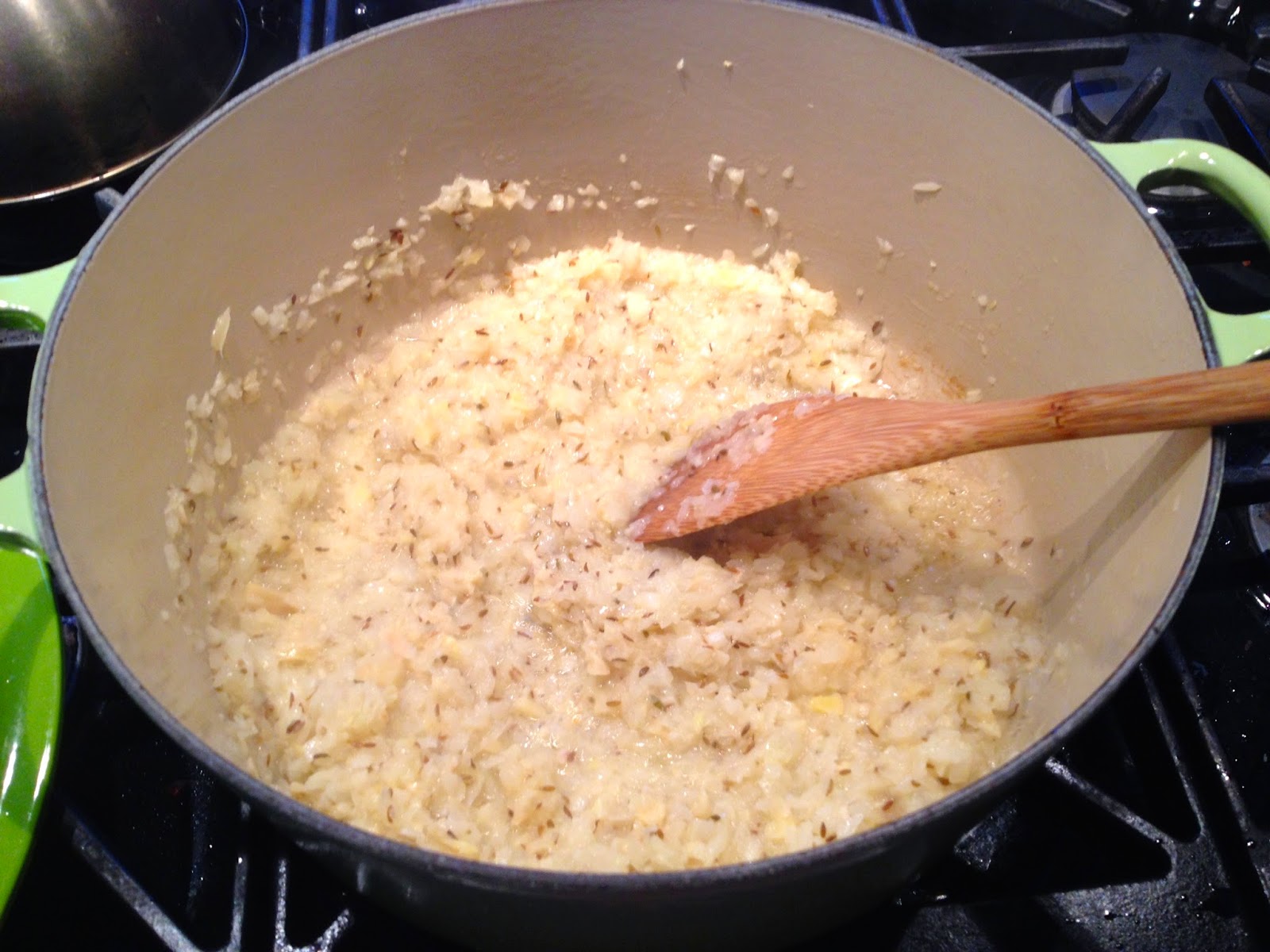 5. In a large pan over medium heat, melt the butter in the oil until it starts to foam. Add the onion mixture, and cook, stirring frequently, until translucent. Cook until the onions start to brown. 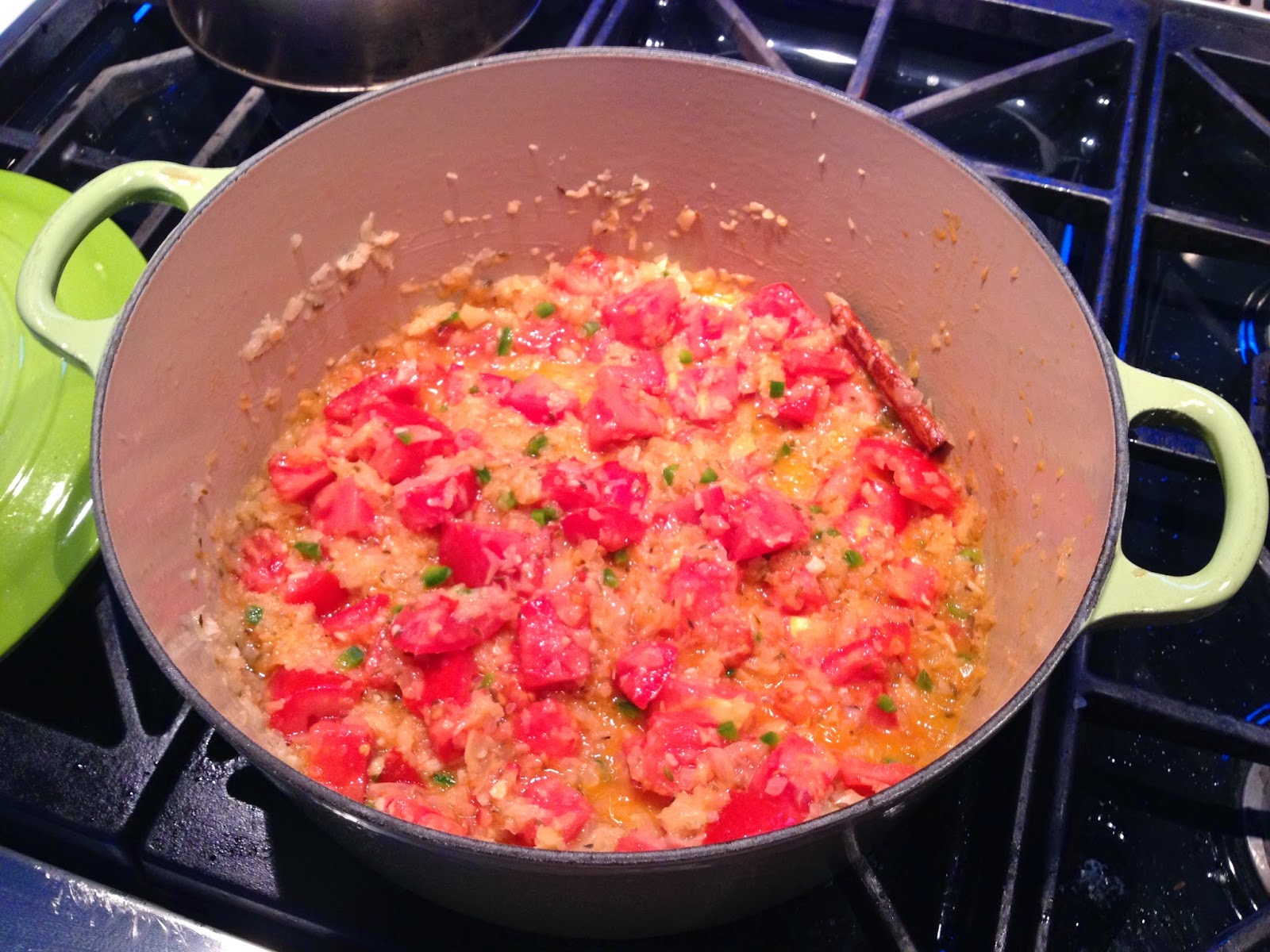 6. Add the cinnamon stick, tomatoes, chiles and salt, and cook until the chiles are soft, about 10 minutes.
Add the chicken and marinade to the pan, and cook for 5 minutes, then add the chicken stock. Bring the mixture to a boil, then lower the heat and simmer, uncovered, for approximately 30 minutes. 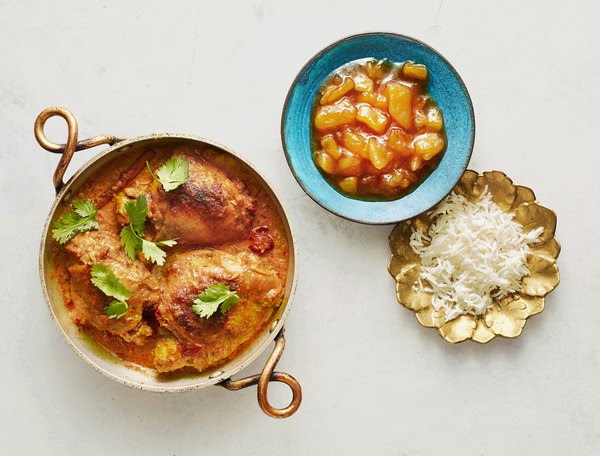