Moroccan Flavored Tagine of Chicken with special thanks to Mrs. Eileen Gaden 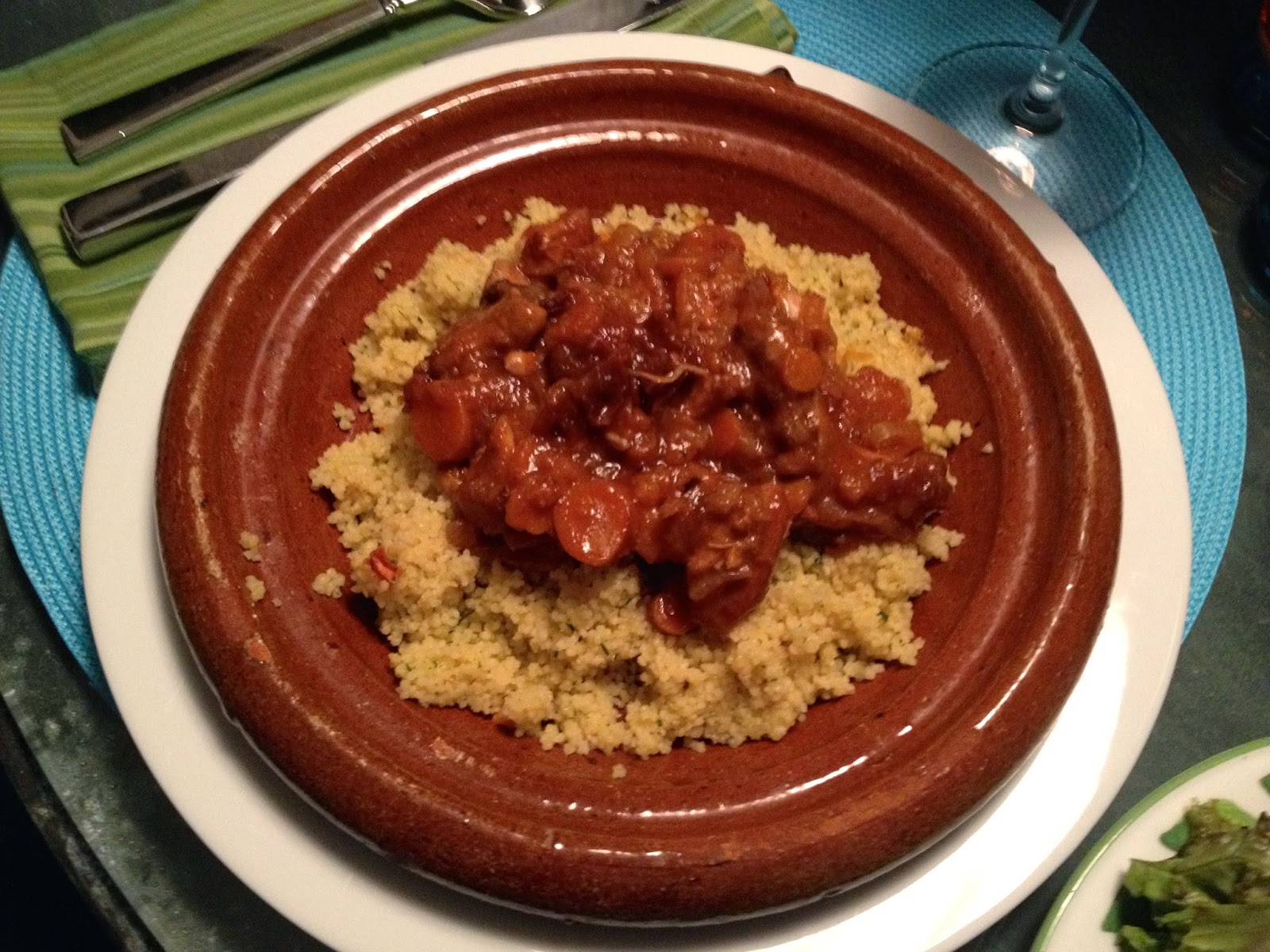 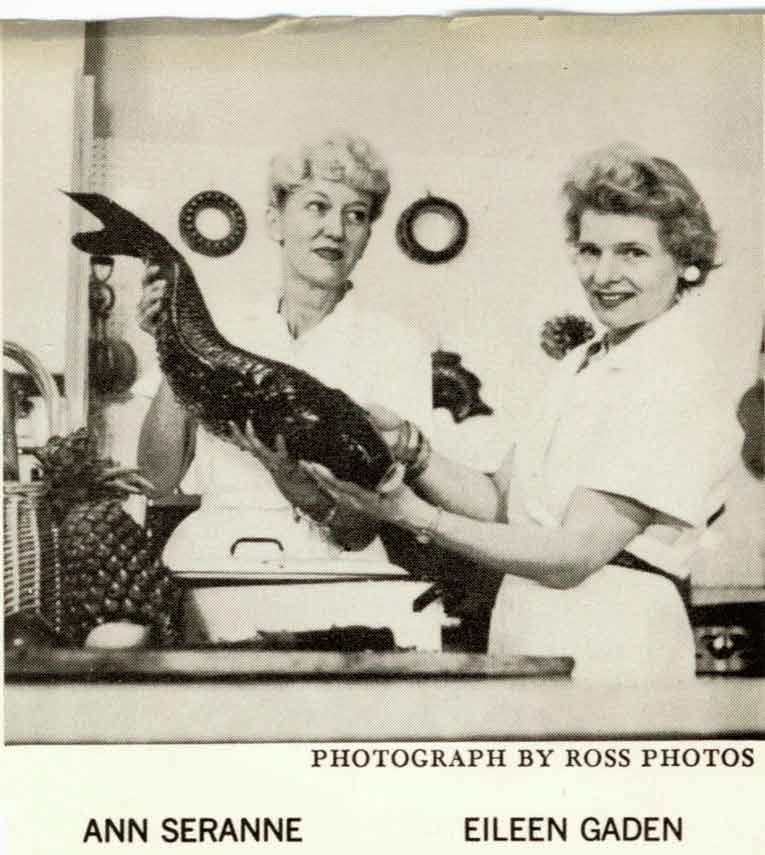 I’ve wanted to cook in a tagine for ages and I mentioned this my friends Bill and Peter.  Now they are both the soul of generosity and recently when we were at their house for dinner, Bill presented me with 3 Tagines that had belonged to his grandmother.  Bill’s was no ordinary Grandmother.  She was Eileen Gaden of Gourmet Magazine, who, with a writing partner named Ann Seranne, was the author and photographer of countless cookbooks starting in 1946 with “The Modern Sandwich, The Art of Sandwich Making for All Occasions” and continuing for the next 50 years to produce cookbooks on anything and everything. They even wrote for Proctor and Gamble: In 1956 they published “Creative Cooking Made Easy: The Golden Fluffo Cookbook”.  Then came “The Blender Cookbook”(1961) (which they later updated and called “The Food Processor Blender Cookbook” in 1981). In the intervening years they produced, “The Church and Club Woman’s Companion”(1964), “The Complete Book of Desserts” (1969) and high on my wish list: “1001 Ideas for Parties, Fairs and Suppers (1964). I keep hoping Bill has a mint copy of that one because Amazon lists its price new as $2432.64.

I had to wonder if Bill’s tagines came into Mrs. Gaden’s possession when she and Ann wrote “The Best of Near Eastern Cookery; Favorite dishes from the Balkans, Turkey, Israel, Jordan, Saudi Arabia and other countries of the Arabian Peninsula”.  Or perhaps when she wrote “Biblical Herb Garden Cookbook” in 1974 or its follow-up, “Biblical Garden Cookery” in 1975. Whatever their origins, I was delighted to have the tagines on loan and set out to make my very first effort in one.  Since Mrs. Gaden died at the age of 89 in 1998, I couldn’t ask her for advice. Instead I went to the source all culinary knowledge, “the Google”, as we are fond of calling it.  There I got quite a  shock.

It turns out that the word ‘tagine’ can be applied to both the vessel now in my possession or the manner in which the dish is prepared. The idea behind the chimney on the two piece tagine was to capture the steam rising out of the dish and return it to what was cooking.  But almost universally, I was advised not to cook in the tagine.  On an E-How video featuring an impressive Canadian woman, I was pressed not to use Mrs. Gaden’s tagines in the oven or on the stovetop.  “Pierre Henri,” our ample hostess announced, “makes one that’s stove proof.”   Now I am a huge fan of Paula Wolfert, the American doyenne of Moroccan cooking, and even she was not keen on my cooking in the tagines. This is because these glazed ceramic dishes cannot withstand high temperatures and may very easily crack and break under heat.  Since they were on loan, I hardly wanted to test out their durability.  But what astonished me is that recipe after recipe suggested using a Crock Pot for the dish.  Of course, I have a Crock Pot but I only pull these out to make Chili on rare occasions.  I don’t see the point of the Crock Pot.  Sure it cooks all day and if the cover doesn’t fit, it will perfume the kitchen from morning till night with…chili.  But virtually every single recipe calls for the browning of ingredients before their immersion into the pot.  If you skip this step, you’re fairly well guaranteed a colorless mess in the end with no caramelization at all.  Supposing you want to prepare something for dinner.  The browning is going to have to take place before you head off to work in the morning. Do you really want to brown meat at that hour? I do not. 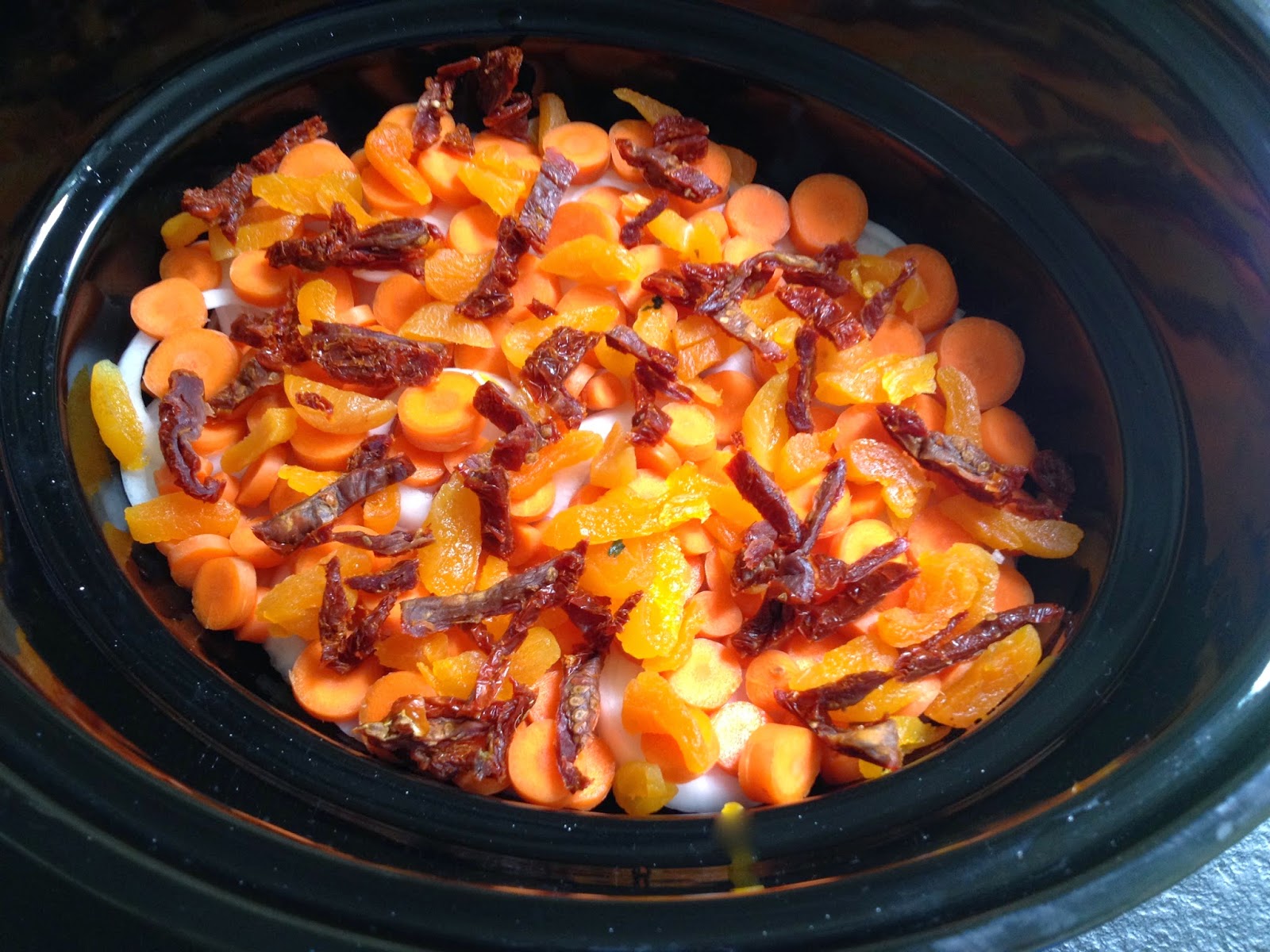 I did make an exception to make my tagine.  Well not quite. The cooking time on high in the Crock Pot was listed as 5 hours on high or 8 on low.  Since I work from home, I was browning my chicken around lunchtime.  The technique for creating the dish involved layering the ingredients—first the chicken, then onion, then carrots, then apricots and sun-dried tomatoes and it looks beautiful as you do so.  Finally there’s a sauce that is one of those that appears to empty the spice rack. But it’s all terribly easy and the result really is rewarding. The apricots, ginger, cinnamon and cumin give this slow-cooked chicken and vegetable dinner a savory and sweet Moroccan flavor.  All that’s left to do is to cook some couscous just before serving.  Then you can take out your tagines, fill them with a layer of couscous and pile on the aromatic chicken and vegetables.  Put the top on the tagine and present it at table.  If you want to be completely true to its country of of origin, eat it with your fingers a la Maroc. But I very much doubt Mrs. Gaden ever did that.
Recipe for Tagine of Chicken
Serves 4. Takes 30 minutes to prepare and 5 to 8 hours to cook
Author: Monte Mathews
Filed Under: Ann Seranne, Chicken Dishes, Chicken Stews, Crock Pot Cooking, Moroccan Cooking, Moroccan Flavored Tagine of Chicken, North African Cuisine, Tagine of Chicken
North African Lamb Boulettes and Amy’s Pomegranate Cumin Salad Dressing
New Brunswick Stew with Rotisserie Chicken