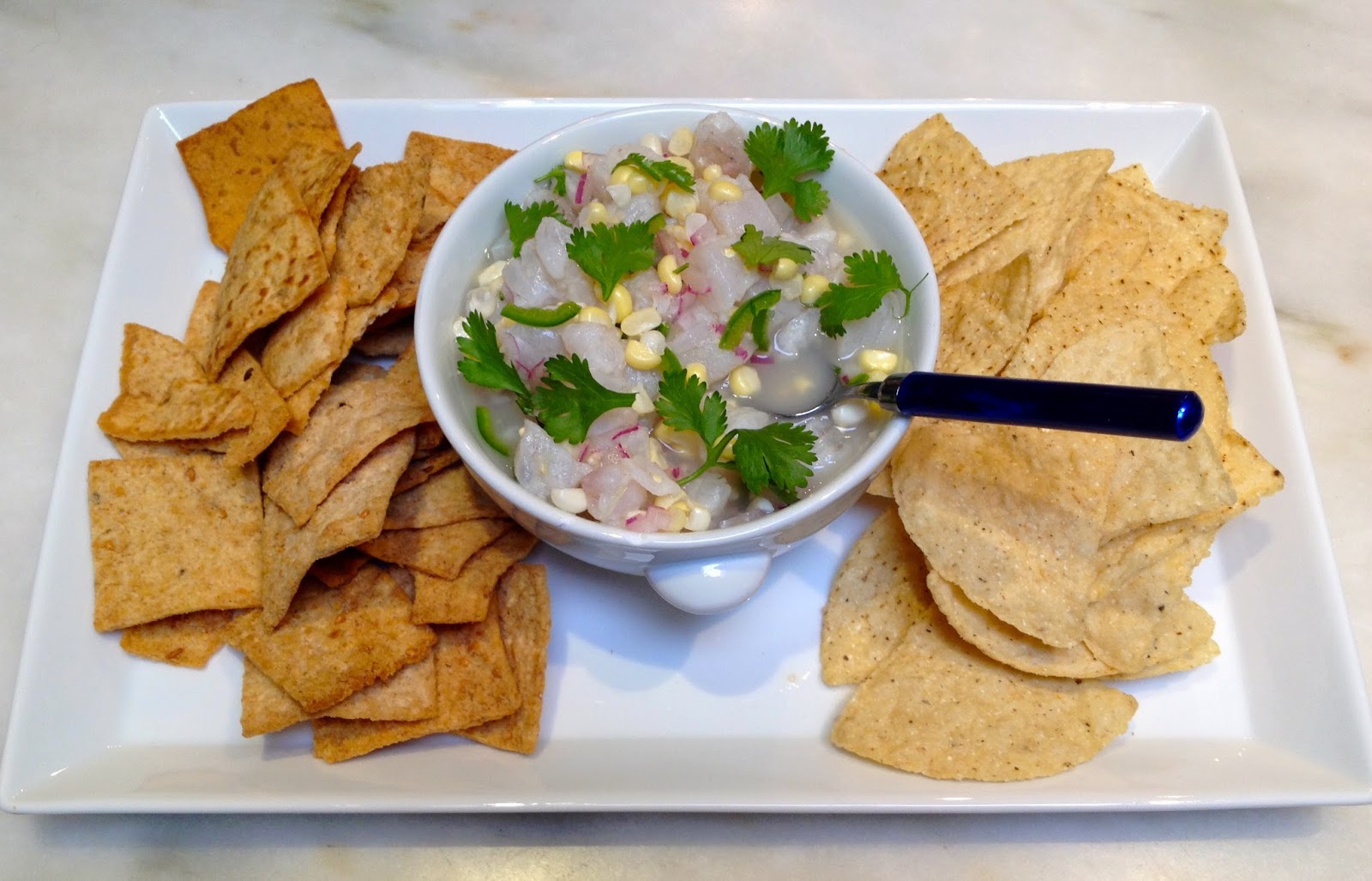 Shelter Island, for those of you who don’t know, is a 5 minute ferryboat-only ride away from The Hamptons, or more properly Sag Harbor, or more specifically North Haven. On the other end of the island, there’s an 8 minute ferry to Greenport on the North Fork.  Despite its close proximity, a ride over to Shelter Island is seen by many of us as a “vacation” from the hubbub of the Hamptons.  Shelter Island was included in the land grant that King James I conveyed to the original Plymouth Colony in 1620.   Since no one made any use of the island or, for that matter had settled anywhere on Long Island, in 1636, King James’ heir, Charles I gave the island to William Alexander, Earl of Stirling. His agent and attorney, a man named James Farret, was then allowed to choose 12,000 acres for his private use.  He chose Shelter Island and the neighboring Robbins Island as his reward. Farret in turn, sold the island for all of 1600 pounds of sugar.  The recipient of this largesse was a man

named Nathaniel Sylvester who became its first European settler, the island having long been inhabited by native Americans of the Manhanset tribe.  Using African slave labor and indentured English servants, the vast Sylvester Estate raised food crops and livestock for slaughter.   The Sylvesters, who also owned property in Barbados,  were part of the Triangle Trade between the American and West Indies colonies, Africa and England.  His descendants kept slaves into the 19th century.  One of them built a fine mansion, Sylvester Manor in 1730, in the center of the island.  It remains there today, now apart of the Sylvester Manor Educational Farm, a group founded in 2011 to “share, preserve and cultivate the land and the history for and with the community’ according to its Director, Maura Doyle who took the time to email me after this post first appear. Until this year, the estate had been whittled down to 243 acres. Just last month, the heir to the property gifted an additional 225 acres to the foundation. For a complete list of the Farm’s offerings, go to www.sylvestermanor.org. 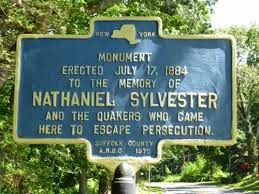 The Sylvesters gave refuge to Quakers, a group much persecuted in the 1700s.  Much to my surprise, in doing some genealogical study, I found that my 10th Great Grandfather and Mother, Lawrence and Cassandra Southwick, were among those Quakers and are buried at Sylvester Manor.

This is an awfully roundabout way to get to today’s post.  But it goes give you some background about this little island paradise with its year ‘round population of just over 2000 people.   The waters around Shelter Island are great fishing grounds and last weekend, at a small farm and fish stand called “Serene Green”,  I bought some local fluke fished off Shelter Island.  Fluke is a member of the Flounder family and is sometimes called Summer Flounder.  Fluke is a deep ocean fish but in Spring the fish leaves its winter environment and comes into shallower waters like the Shelter Island Sound.   There it breeds and summers and only returns to its deep water habitat in late fall or early winter.

Fluke is a local delicacy but it’s so prized, many of the fish caught here are sent to New York or even Japan for use in sushi. I considered myself lucky to find a piece about ½ lb. in size. I decided it would make a great hors d’oeuvre to serve before our Saturday night dinner.   I was especially pleased to find a recipe for Fluke ceviche in Shelter Island’s local newspaper, The Shelter Island Reporter.  Ceviche has little or nothing to do with Shelter Island.  This traditional method of preparing fresh fish with an acidic marinade is far more at home in Peru, Ecuador and Chile.  I comfort myself in knowing that aside from the limes, everything else in the recipe is grown right here, including of course, the all-essential fish.  This is not the least bit difficult to do: My guests devoured it on Pita and White Corn Tortilla Chips.  Here is the recipe which calls for a toast to Shelter Island as an additional accompaniment.
Recipe for Ceviche of Fluke, Shelter Island Style from the Shelter Island Reporter:
Serves 4 as an appetizer, more as an hors d’oeuvre.  Prep Time; Under 30 minutes to chop and assemble, 15 minutes to “cook” in the marinade. 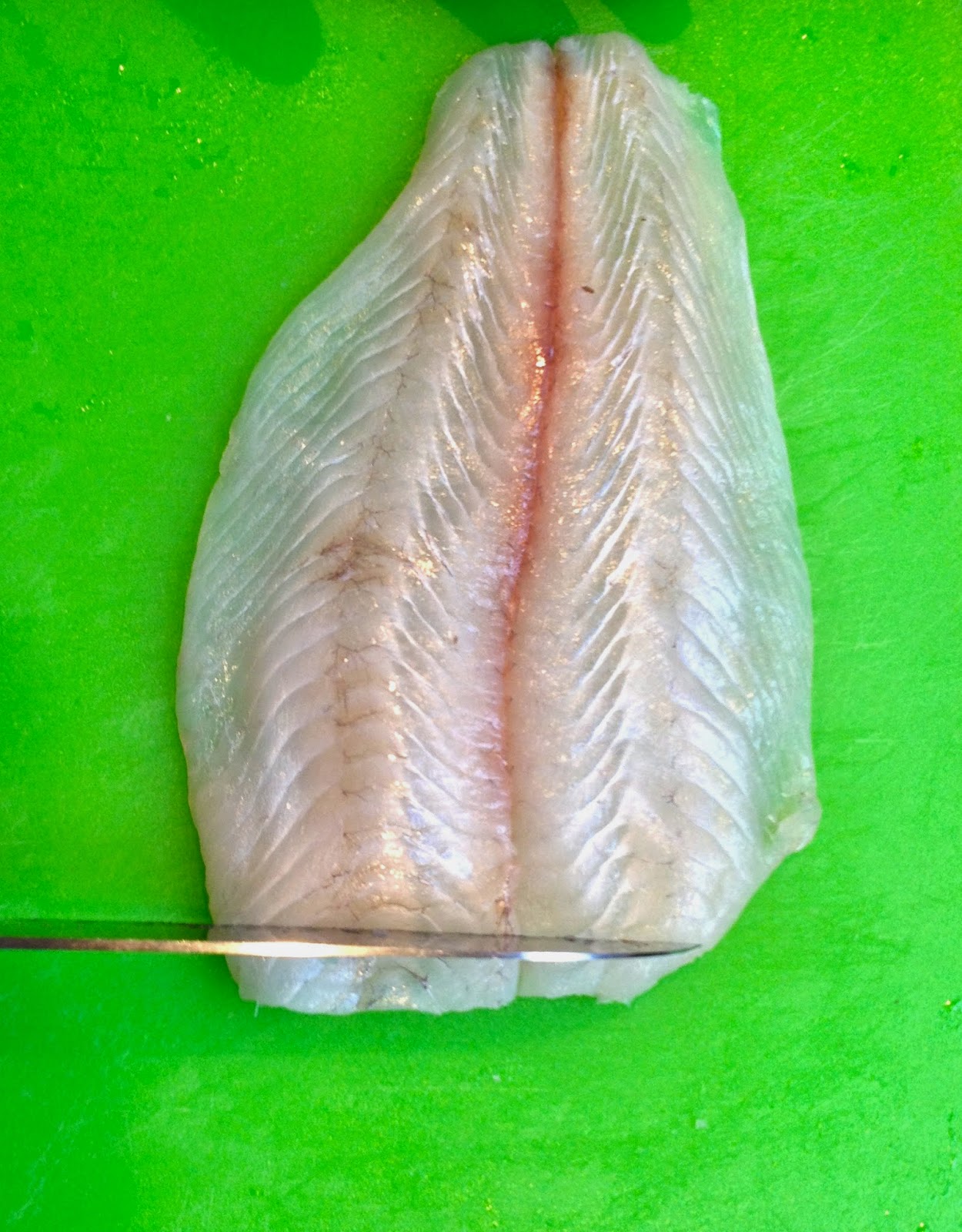 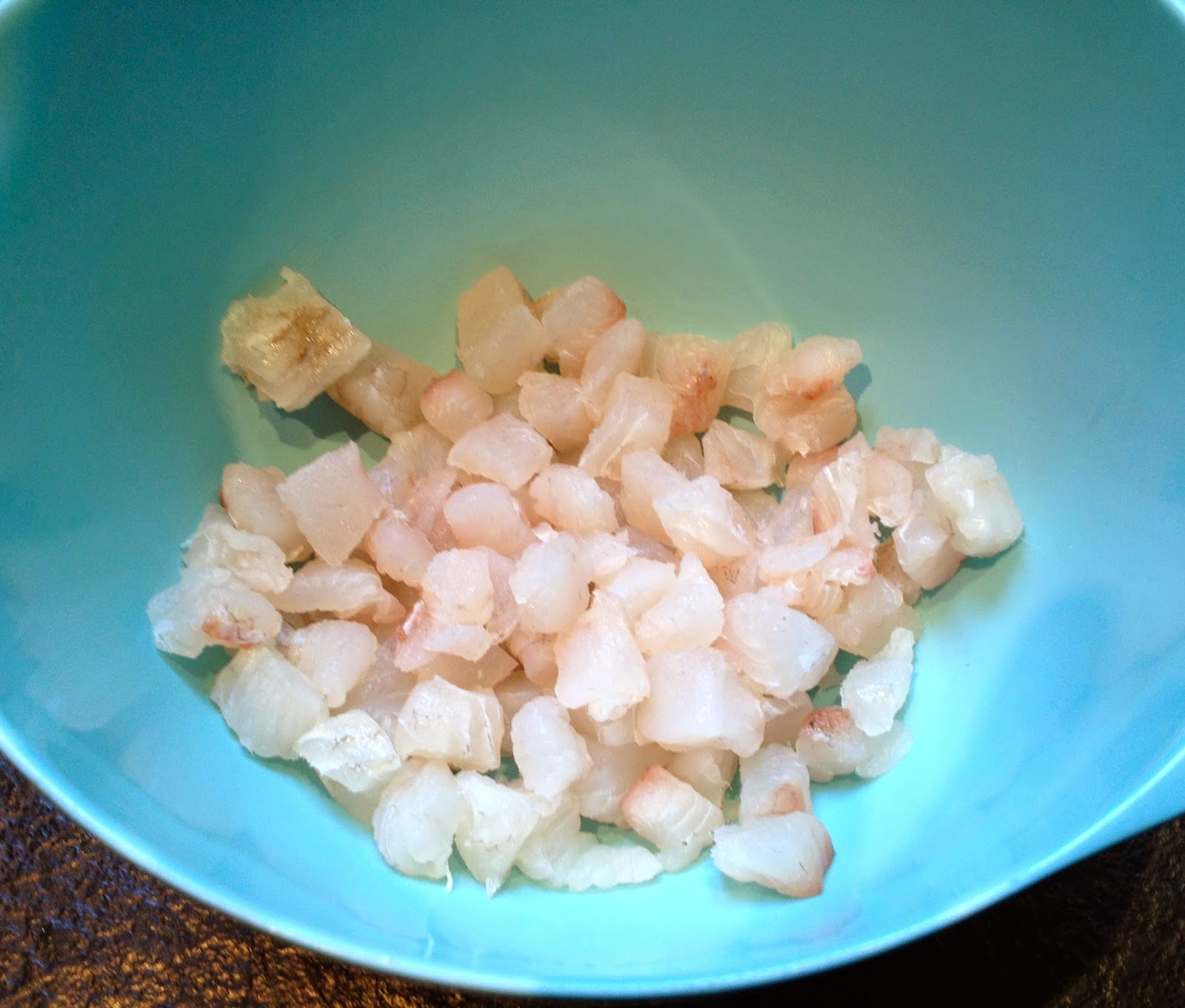 1. Briefly rinse and dry the fish. Run your fingers over the filets to check for bones and remove them. With a sharp knife, cut the filets into 1/2-inch pieces and put them in a shallow, non-metal dish. Add garlic and salt and set aside for 10 minutes. 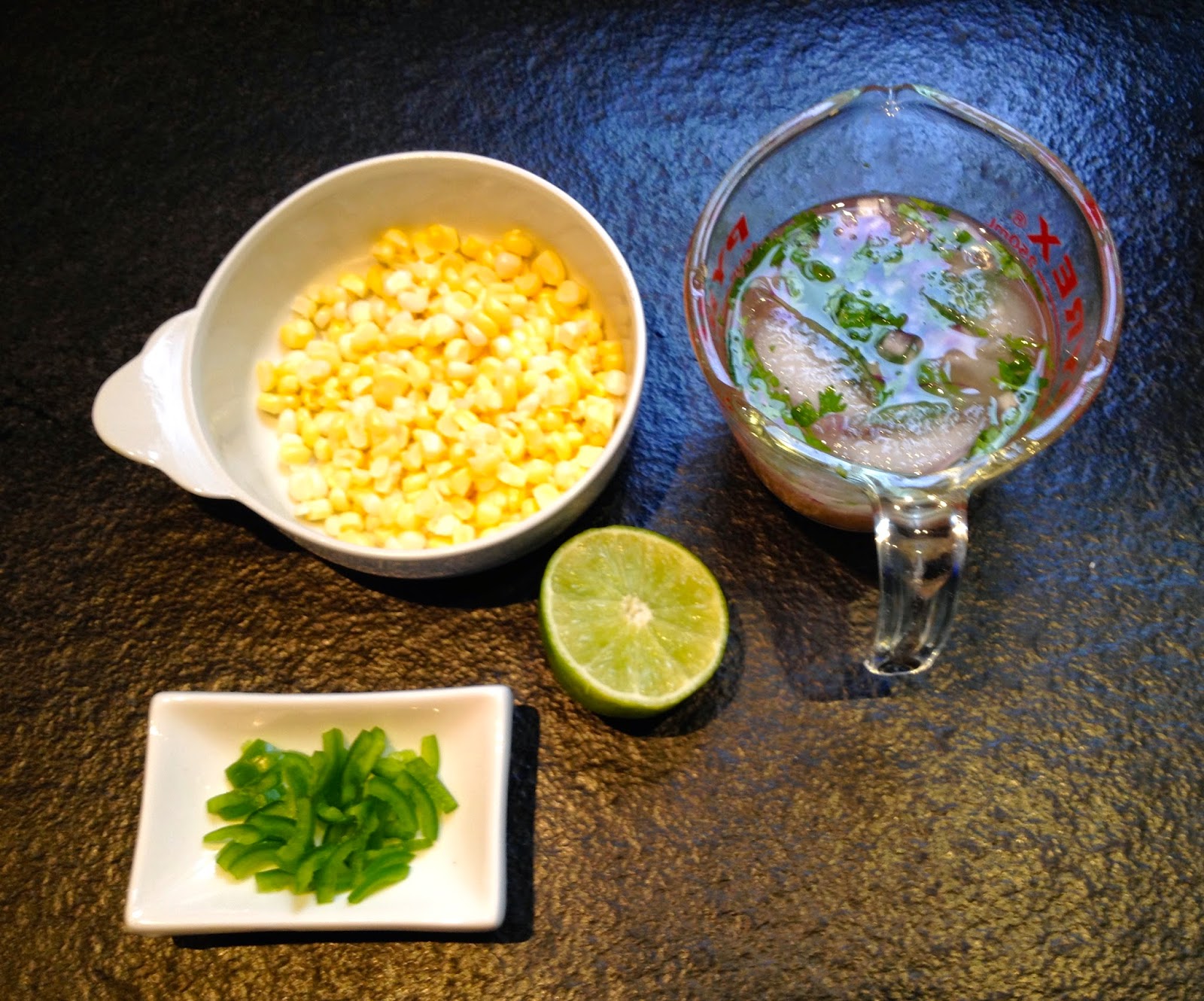 2. In a non-reactive bowl, combine the lime juice, onion, cilantro and the un-sliced ½ jalapeno.  Add the ice cubes and as they melt into the lime juice/onion marinade, taste it for tartness and heat (from the peppers). When it is still very tart, remove the ice cubes and the jalapenos.
3. Pour the lime juice mixture over the fish and let it marinate for 10 to 15 minutes or until the fish is white and flaky.
4. Add the corn kernels and thinly sliced jalapeno. 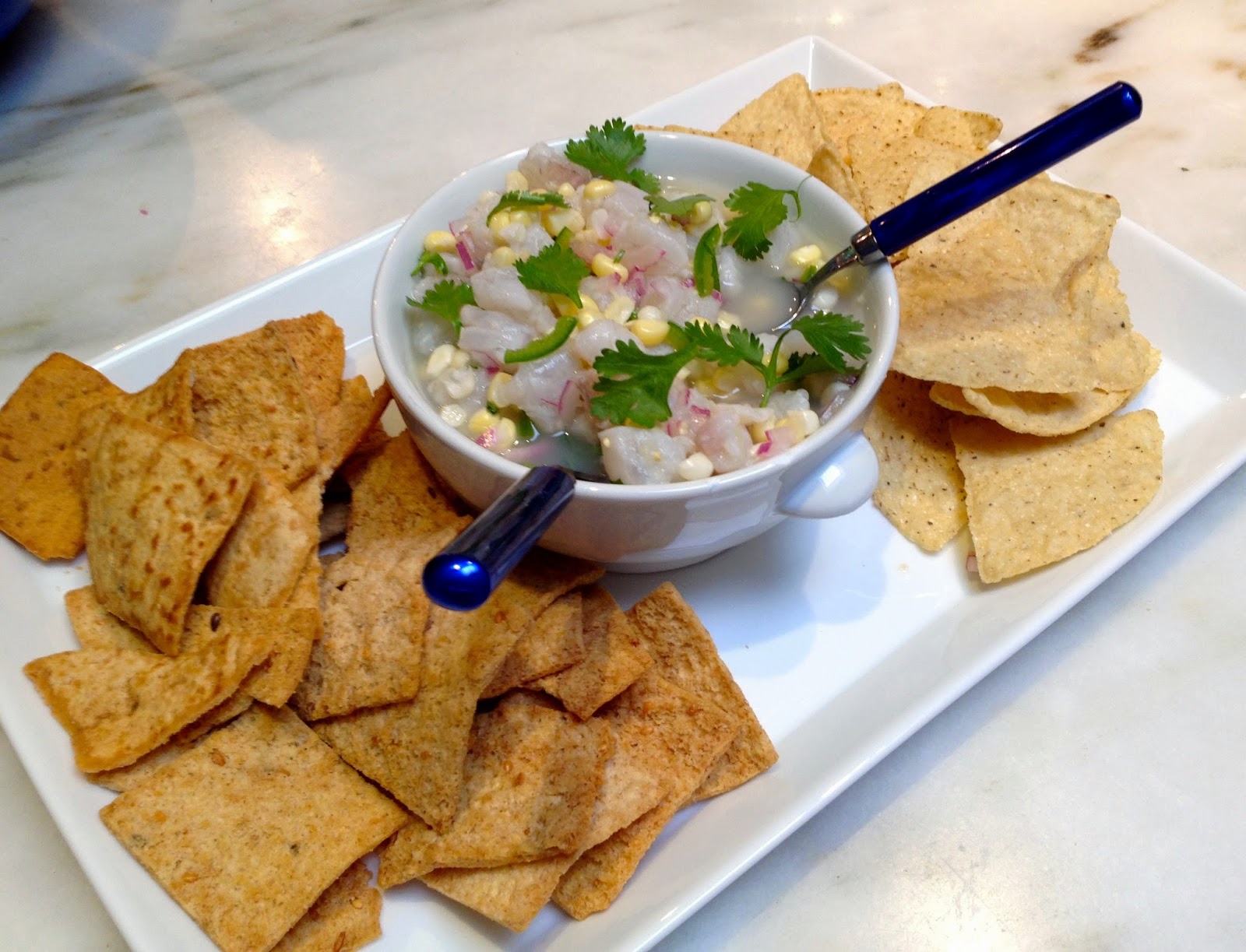