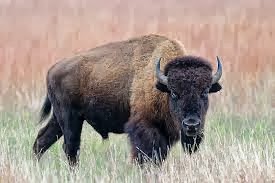 A few years ago, I witnessed the arrival of Bison or Buffalo in my local supermarket.  At the time, a Day-Glo printed sign heralded its arrival in the meat case.  Not only had it arrived but also it was billed as ‘the meat of the future’.  A chart compared it favorably to both beef and chicken. It was lower in cholesterol, lower in fat, higher in protein and, from this particular purveyor, free of all those pesky antibiotics.  To be fair, there was an asterisk next to chicken.  It had to have its skin on to fail so miserably in those comparisons.  The man who presided over the meat case could not say enough good things about buffalo.  Its taste, its texture, its ease of preparation was all music to the meat department.  It had to be slow-cooked of course and it was helped by sauce of some sort but it was altogether a new item to add to any cook’s repertoire.  I asked from where in the west did this buffalo hail.  “The West?” My meat man looked amazed. “It’s from a farm in New Hampshire. That’s how come it’s so fresh”.

That there are actually buffalo in sufficient numbers, in New Hampshire or anywhere else, to provide meat in today’s supermarkets is a true tribute to this animal.  Not a true Buffalo, it is more correctly “Bison”. That’s the name The National Bison Association want to encourage.  This distinguishes this American native from the Asian Water Buffalo and the African Cape Buffalo to which it is not related.  But it’s a tough sell.  Buffalo is ingrained in the any history of the American West.  And well it should be: this great beast was all but wiped out in one of the most ignominious slaughters in history.  As the country pushed west of the Mississippi in the 1820s, ‘the plains were black and appeared in motion’ wrote an unknown contemporary writer.  These were the great herds of bison whose numbers have been estimated variously between 60 and 100 million animals.  Weighing up to 3500 lbs., bison had fed and clothed the Plains Indians for hundreds of years.  The killing of a single male bison provided 1250 lbs. of meat.  But the buffalo’s role in Native American life hardly stopped at being a foodstuff.  The hide was cured and used for clothing, teepees, saddles, harnesses, lassos, and bowstrings.  Tendons and sinews became thread.  The hair was braided into rope, the stomachs used for cooking pots and water buckets, the bladders for rafts.  Horns became spoons and ladles. Even buffalo chips were used.  Called “Prairie Coal”, they provided fuel in this largely treeless landscape.

In a matter of a very few years, the buffalo population was decimated in the west.  In order to raise cattle on the land, early settlers slaughtered the free-ranging animals.  As they built railroads, huge numbers of buffalo were dispensed of to secure their right of way.  Once the trains ran, the Railroads hired professional gunmen who rode the rails killing any buffalo that wandered onto their tracks.  Buffalo Bill Cody came by his name honestly: In one single year, working for the Union Pacific Railroad, he dispatched 4280 of the animals.   But there was something even more sinister at work here.  The Native Americans were so dependent on the animal that the white men believed that by eliminating it, they would eliminate the Indians themselves.  If only they had studied a little harder.

If the Plains Indians were proof that ‘you are what you eat’, consider these facts: They had no reported incidence of cancer.  They had no reported incidence of heart disease. Their average life span was 85 to 90 years of age and when they died, it was generally from lack of dental care.  They could no longer eat what had sustained them and that, of course, was buffalo.  By 1906, there were 260 buffalo in all of the United States.  Fortunately, government protection was finally granted the animals.  Today there are well over 100,000 bison in public and private hands.  Every year, 15,000 buffalo are brought to market, yielding some seven and a half million pounds of meat.  They’re still concentrated in the West but they’re moving East to places like New Hampshire and New York. 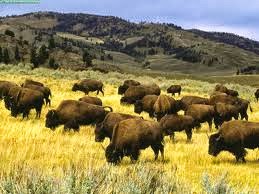 I am always on the lookout for anything to break the protein monotony of chicken, beef, pork and fish.  So when I was casting about for a new meatball recipe, I was pleased to see one from the Bison Council.  The group is dedicated to promoting, preserving and stewarding the North American Bison.  They’re a powerful force in getting their members “to maintain the highest standards and ideals of animal care and husbandry, sustainability, food safety, purity of ingredients and quality”.  And at their root, they are driven by great affection for the “majesty, power and nobility of the North American Bison”.  And if these meatballs are any indication, they are doing a spectacular job.  It’s a good idea to shop around for buffalo.  I found wild gyrations in price in two stores that are side by side.  The ground buffalo I bought came in at $7.99 a lb. at one of them and was fully double that at the other.
I made a few changes to the original recipe.  What I discovered was that the meatballs are helped by stewing them in plenty of sauce.  Spicy is a relative term: here I added Sriracha because we love spice. If you don’t, just eliminate it. These meatballs would make a great appetizer or turn an hors d’oeuvre into a conversation piece. They retain every one of their health benefits over beef with less fat and fewer calories and they deliver a bold taste.   I chose to make them a center of the plate item that I served with pasta.  It made a really special meal.  Almost as special as a bison itself.  Here’s the recipe.

A wonderful take on a meatball. Made of Ground Bison and topped with a spicy tomato sauce, they're as healthy as they are delicious