Where to find The Best Cuban Sandwich in New York? Not in any restaurant…it’s yours to be had on the street. 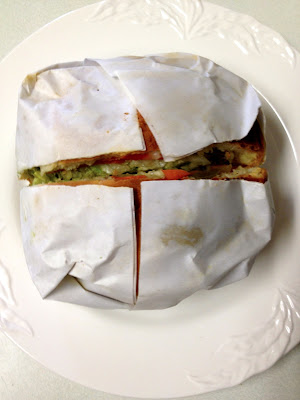 “Food Truck Wars” on the Food Network have given a face to America’s passion for street food and pop-up food destinations.  Most of what you see on Television are high tech trucks that would give an RV a run for its money.  New York has had street food for as long as I can remember.  Before there were food trucks, there were hundreds of food carts. The smell of chestnuts in fall, the steam rising from the hot dog vendors’ carts, the roasted peanuts sold on every corner, are all as New York as the Empire State Building. To this day they are literally one a block and, in midtown, some cluster together to form outdoor food courts.  In my neighborhood on the Upper West Side, we get occasional weekend visits from some of the big guys like ­­­“Gorilla Cheese”, “Wafels and Dinges” and “The Treats Truck”.  But on any given day two kinds of carts take up positions on nearby street corners.  There are the Halal carts which serve Middle Eastern kabobs and endless plates of rice and chicken.  Then there are the Mexican food carts.  And it was here that I discovered New York’s best Cuban Sandwich, right outside the Chase bank at 70th and Broadway. 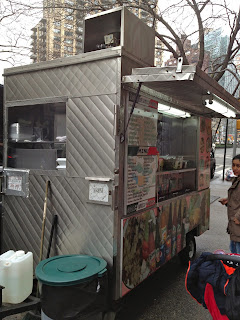 The stand doesn’t have a name. It’s festooned with the colors of the Mexican flag and manned by two tiny women.  In all about five feet by 8 feet, they turn out everything from Tostas to Quesadillas in as many flavors as you can imagine.  But if you want to try as many fillings as you can, their Cuban Sandwich is the way to do it. For 8 dollars this monster sandwich isn’t just a bargain, it’s an explosion of flavor, an irresistible mixture of layers of meat and cheese and pickled jalapenos.  The thing is so enormous, I generally eat half and keep the rest for another day.  They’re as microwaveable as they are delicious. 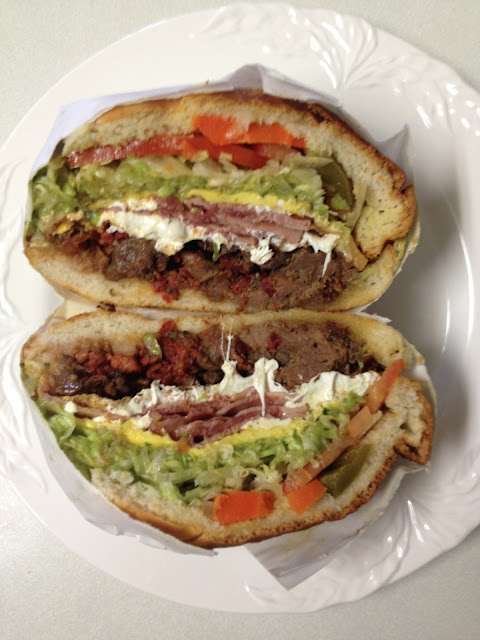 Starting from the bottom up, here are its layers: On a soft Torta bun about 6 inches in diameter, there’s  Pork “Tinga”  topped with a fried egg, Queso Fresca (Mexican cheese), Ham, a slice of American cheese, shredded iceberg lettuce, a slice of tomato, pickled Jalapeno peppers and carrots all liberally doused with Salsa Verde.  The bun tops the whole deal, which gets put into plain sandwich paper and cut into two enormous halves.  It’s then wrapped in aluminum foil, stuffed into a plastic bag filled with napkins.  I can hardly wait to get the thing home.  And I highly recommend you do the same thing next time you’re in the neighborhood.
Author: Monte Mathews
Filed Under: Food Trucks NYC, Latin Cooking, Mexican Cuisine, Sandwiches, Street Food, The Best Cuban Sandwich in New York
Our 325th Post! Melissa Clark’s Quick Banh Mi with Pickled Carrots and Daikon
Where to find the best Egg Sandwich in New York City

3 thoughts on “Where to find The Best Cuban Sandwich in New York? Not in any restaurant…it’s yours to be had on the street.”