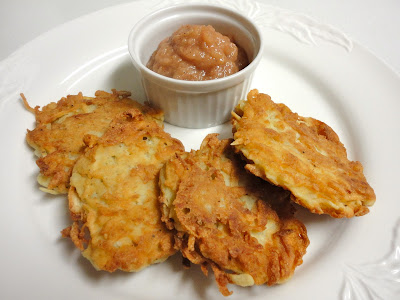 Saturday was the first day of Hanakkah, the Jewish Festival of Lights.  The holiday, which is celebrated every December, commemorates the time when a small army of Jews defeated the Syrian King Antiochus IV (ca 215-164 B.C.) who had taken over Jerusalem and vowed to destroy Judaism.  Antiochus had filled the Jewish temple with Syrian idols.  In a surprise attack, led by Judas Maccabee, the small Jewish force recaptured Jerusalem and reclaimed their temple.  But when they went to light their holy lamps, they found only a single vial of oil. Lo and behold, this tiny amount of oil kept the lights burning for eight days.  This was declared a miracle.  Now, during the eight days of Hanakkah, every night celebrants light a candle in a Menorah (a candle holder with places for 9 candles ). They also exchange small gifts and make donations to the poor.  The ninth candle, called the shammash, has only one purpose: to light the other eight.  Since no Jewish festival of any kind is unaccompanied by glorious food, Hannakah is no exception.  And of all the dishes served, none is more closely linked to the Festival of Lights than the latke or potato pancake.  And of course, there’s a story attached to the Hannakah latke as well.  And it’s a doozy.
Originally, the pancakes were made of cheese and they were connected to the story of Judith.  According to legend, Judith, the daughter of the Hasmoneans, the family of Judas Maccabee, fed cheese to Holofernes, the leader of the enemies of the Jews.  The cheese made him so thirsty that he drank too much wine.  Once he was quite drunk, Judith cut off his head.  For this reason Jews eat cheese delicacies on Hannakah.  Eventually all forms of pancakes were accepted as part of the holiday ritual.  Because Pancakes are cooked in oil, they are also a reminder of the miracle of the oil.  In the case of Ina Garten’s latke recipe, the oil is clarified butter. 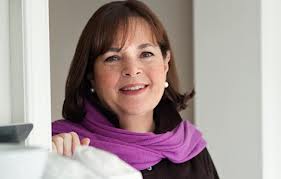 If you want cooking cut down to its essence, there’s likely no better person to go to than Ina Garten.  Her recipe for latkes is an outstanding example of how she pares ingredients down to their essentials and creates a flawless execution.   When I was researching
Latke recipes, I simply could not believe how complicated some of them were.  Potatoes were boiled, onion was grated and squeezed dry—it sounded like a highly complex afternoon in a very messy kitchen.  Not so with Ms. Garten’s invention.  Here, plain baking potato is grated, its moisture removed in a kitchen towel, an egg, a little flour, salt and pepper is added and into the fry pan they go bubbling away for all of 2 minutes a side until they are crisp and golden and irresistible.
And then there’s Ina’s applesauce.
The connection between applesauce and Hannakah doesn’t seem to have any of the religious significance of the latke.  But other than sour cream, virtually every latke recipe pairs the pancake to applesauce.  But Ina’s Applesauce is not the stuff that I remember. Baked in the oven, the smell alone is enough to seduce.  Allspice and cinnamon, brown sugar and butter top masses of peeled and cored apples, the tart Granny Smith and the sweet Macoun. The surprise in the recipe is the amount of citrus that Ina starts with.  Both Navel Orange zest and juice have a role here.  Then a whole lemon is similarly zested and juiced.  The addition of the citrus makes the dish sing.  And if your only acquaintance with applesauce is something out of a jar, you are in for a wonderful surprise!  The only caveat is that you will have masses of applesauce—far too much for the relatively small number of latkes Ina’s recipe for them make.  But since we are fortunate enough to have masses of children in our lives, I am sure we’ll be able to give a little Hannakah Gift to each one of them, whether they celebrate the Festival of Lights or like us, just enjoy its irresistible culinary traditions.  Here are the recipes:
Recipe for Baked Applesauce from Ina Garten
Make the applesauce first.  The latkes are a very last minute dish as the potatoes will quickly go brown unless they’re cooked the minute the latke mixture is made.  And the heavenly smell of the applesauce
is something you’ll want to savor for as long as you can.
Zest and juice of 2 large navel oranges
Zest and juice of 1 lemon
3 pounds Granny Smith apples (6 to 8 apples)
3 pounds sweet red apples, such as Macoun, McIntosh, or Winesap (6 to 8 apples)
1/2 cup light brown sugar, packed
1/4 pound unsalted butter
2 teaspoons ground cinnamon
1/2 teaspoon ground allspice
Preheat the oven to 350 degrees. 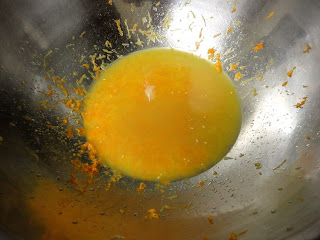 Place the zest and juice of the oranges and lemon in a large bowl. 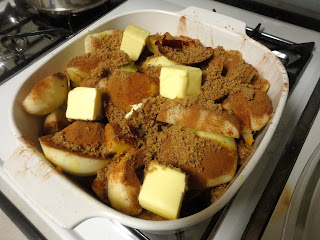 Peel, quarter, and core the apples and toss them in the juice. Pour the apples and juice into a nonreactive Dutch oven or enameled iron pot. Add the brown sugar, butter, cinnamon, and allspice and cover the pot. 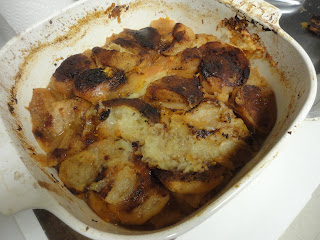 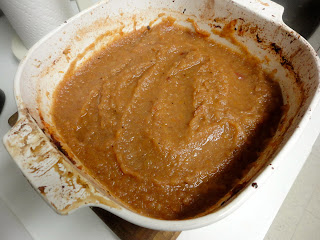 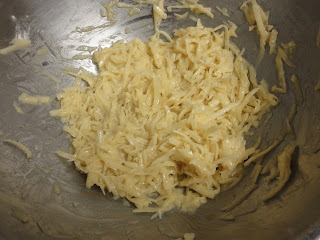 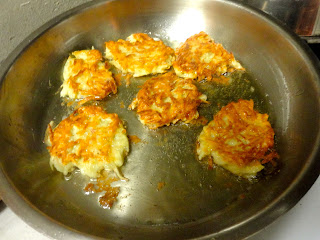 Melt the clarified butter in a large saute pan over medium heat. Place a tablespoon of the potato mixture into the sizzling butter and cook for 2 minutes. Turn the pancakes over and cook for another 2 minutes, or until crisp on the outside and golden brown. Serve the pancakes hot from the skillet. 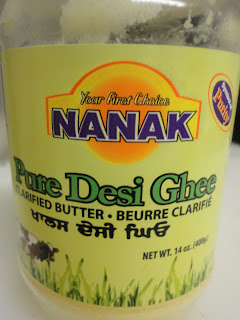 Note: Clarified butter is butter which has had its milk solids removed. Once this is done,  the butter can be heated to a higher temperature without smoking, a perfect oil to fry your latkes.   To make the clarified butter, slowly melt 4 tablespoons butter in a small saucepan. Set it aside until the milk solids settle. Spoon off any solids that rise, then carefully pour off the golden liquid, discarding the milky part in the bottom of the pan. Now if this all sounds too complicated, and if you are fortunate to live anywhere near an Indian market, you can buy a clarified butter called “Ghee”.   Not only is Ghee an incredible time-saver, the stuff keeps in the refrigerator forever or at least until next Hannakah.
Author: Monte Mathews
Filed Under: Apples, Baked Applesauce, Chanukkah Foods, Ina Garten, Latkes, Potato Pancakes, Potatoes, Simplest Ever Latkes
Darina Allen’s Pork Chops with Sage, Ina Garten’s Roasted Asparagus with Parmesan and my own Smashed Potatoes
1770 House Meatloaf with Garlic Sauce from Ina Garten’s “Barefoot Contessa Foolproof”