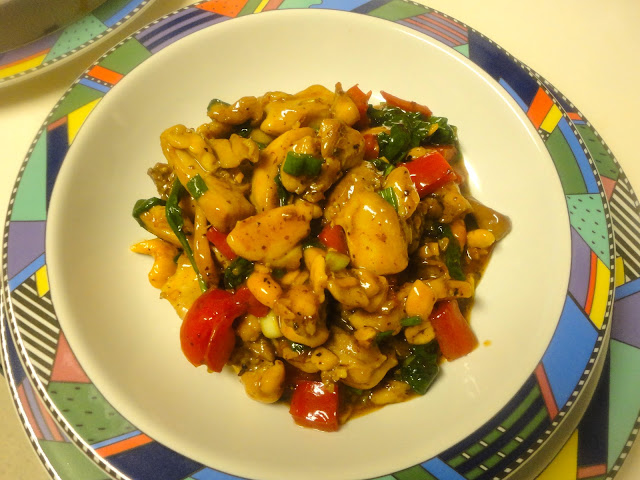 If I could teach one technique that is perfect for weeknight cooking, it would be the stir-fry.  It is the absolutely ideal last minute dinner when you’re not entirely sure when everyone’s getting home.  You put everything in place in advance.  Then, when whomever you are cooking for arrives at the door, you’re ready to have dinner on the table in moments.  In the case of this Asian inspired version of a stir-fry, the cooking time adds up to all of 12 minutes max. That’s kind of hard to beat.  And hard to beat too are the flavors and textures of this dish. The tender chicken, the crunch of the cashews and red pepper, a hint of spice from the red pepper flakes, the green of the spinach—they all come together in a silken sauce that’s better than any Chinese take-out. Come to think of it, if you ordered Chinese, it would probably take longer to get to you than this dinner does. You’ll notice that I served this dish without any sides.  The obvious choice would be a bed of fluffy white rice. But we sometimes skip the carbs and then of course, there’s the matter of Arsenic in Rice. 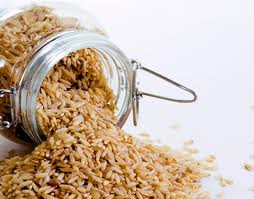 Having lived through the time when Swordfish was off the menu because of mercury poisoning, the news that Rice contains Arsenic might have been greeted with a  shrug.  But this news is terrible.   “Consumer Reports” did an exhaustive study of 60 different rice products, from infant cereals to rice pastas even rice drinks. Their conclusion: Eating rice once a day can increase arsenic levels in the body by at least 44{4e4771bbe073b579fdd8e596ee487f65145483febbc8ba0a80525f62b26cad86}.  Now the defense of this shockingly high number is that this is inorganic Arsenic.  How that is supposed reassure anyone when Inorganic Arsenic is a class 1 carcinogen capable of producing lung, liver and bladder cancers is a little hard to understand. 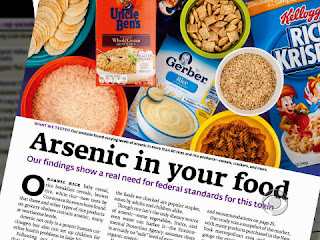 On the national news the other night, a very taut spokeswoman for the Rice Council did her bit to assuage the terror her audience undoubtedly felt.  It was sort of like listening to a spokesperson for the Tobacco Companies.  “Rice has always been considered a nutritious food and an important part of a healthy diet,” the USA Rice Federation spokeswoman parroted, “We’ve been made aware of concerns about the level of arsenic in rice, but are not aware of any established studies directly connecting rice consumption and adverse health effects.”  And we’re sure they’ll be able to hire people like Jim Coughlin, an “independent” toxicologist who has consulted for the USA Rice Federation in the past.  He is quoted as saying: “The levels are low.  If we’re going to eat, there’s going to be arsenic in all our foods. It’s found in fruits, vegetables and grains, and rice falls in the category. You’ve got to eat, and I think rice is a safe and nutritious food.” He thinks? I think we need a little more science than that. 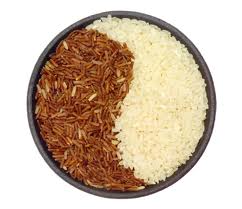 What can we do while the Food and Drug Administration Consumer Reports finish collecting and analyzing more than 1,200 samples of rice products by the end of the year? Once the samples are analyzed and completed, the FDA will determine if additional recommendations are needed. Meanwhile, my dear friend Kristi has just tossed out all her Brown Rice.  I confess to a certain Schadenfreude in hearing that white rice had lower levels of arsenic compared to the brown stuff. For years we were led to believe that brown rice was far superior to white. (Nutritionally, it still is.)  But Arsenic is most prevalent in the outer layers of the grain. White rice is ‘polished’ removing some of those layers.  But don’t cheer yet. The Consumer Reports study found that rice grown in Arkansas, Louisiana, Missouri and Texas generally had higher levels of arsenic. Those are four of the six states that produce virtually all the rice in this country. Only Missippi and California are missing from that list. Now how does the arsenic get into the rice in the first place?  Apparently arsenic in now-banned pesticides lives on in the soil for 45 years and these pesticides were only banned in the ’80s.  And the reason rice contains so much more arsenic than other crops is because it is grown in arsenic-tainted water as well as arsenic-polluted earth.  So for years to come, rice will still contain arsenic.  And there are people who want to close down the Environmental Protection Agency!
Until the FDA makes its recommendations, it might be wise to hear what the whistle-blowers at “Consumer’s Report” recommend:
1. Arsenic can be reduced by rinsing and then boiling rice in a 6 to 1 water ratio which will remove about 30 percent of its arsenic.
2. People should eat no more than two servings of a quarter-cup of dry rice a week.
2. For children under 5, the group advised against drinking rice drinks as part of their daily diet.
3. They also recommended no more than one serving of infant rice cereal a day for babies.
Now back to our stir-fry:  Here’s the recipe and I can say with confidence that you will never miss the rice.
Recipe for Chicken, Cashew and Spinach Stir Fry adapted from Gourmet Magazine 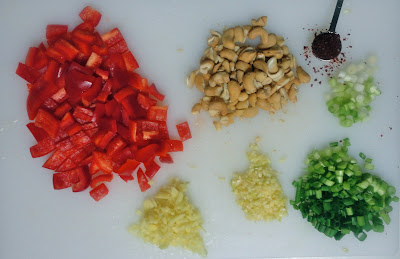 Chop scallions, separating white and green parts. Pat chicken dry, then cut into 3/4-inch pieces and toss with salt and pepper. Heat a wok or 12-inch heavy skillet (not nonstick) over moderately high heat until a drop of water evaporates immediately. Add oil, swirling to coat, then stir-fry chicken until golden in places and just cooked through, 4 to 5 minutes. Transfer to a plate with a slotted spoon. 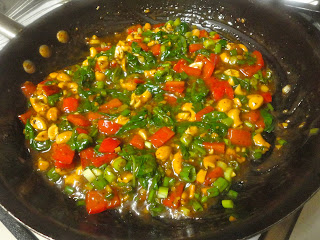 Add bell pepper, garlic, ginger, red-pepper flakes and scallion whites to wok and stir-fry until peppers are just tender, 5 to 6 minutes.
Stir together broth, soy sauce, cornstarch, and sugar, then stir into vegetables in wok. Reduce heat and simmer, stirring occasionally, until thickened, 1 to 2 minutes. 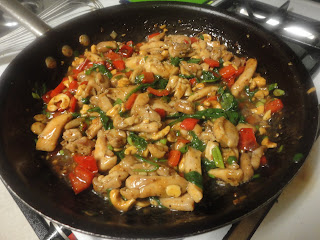 Stir in cashews, scallion greens, spinach and chicken along with any juices accumulated on plate. Wait until spinach has wilted and then serve over rice if you would like.