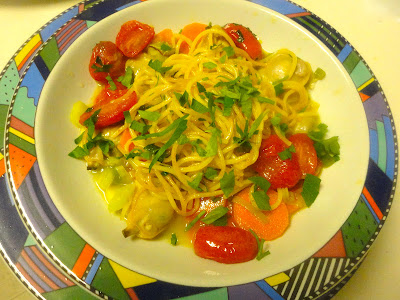 I am big fan of Linguine with Clam Sauce as our recipe search feature will confirm.  So when I saw this recipe for a variation on the theme in the July 2012 issue of La Cucina Italiana, I had to try it.  After all, the Little Neck clam, with which this lovely, light dish is made, is about as local as you can get out here on the East End of Long Island.  It’s especially appealing too because, unlike Linguine with Clam sauce, the recipe includes some great fresh vegetables —  carrots, leeks and tomatoes – and it’s light on the pasta.  In true Italian fashion, La Cucina lists it as a “Primo” or appetizer which is generally the role pasta plays in the Italian menu.  I served it as our main course.  It is a perfect summer pasta dish especially with those bite-sized morsels of heaven, the littlenecks.

For years, families have clammed here, taking their rakes and digging through the fine sand to pluck these tender-sweet fruits of the sea from their beds at low tide. They look for tell-tale ‘bubbles’ in the sand where the objects of their affection live.  They zealously guard the locations of their clamming grounds just as they would buried treasure.  It’s a fine pastime usually accompanied by a few beers to accompany the hard work of raking through the sand.

When you cook with Little Necks, the key word to remember is “sand”.  These creatures burrow in and it’s essential to clean the sand from the interior of the clams or else you’ll have one gritty ‘umido’.  So here’s a technique to use to minimize the sand and maximize the clam.

When you get your clams home from the market, fill a large bowl with ice and then put a smaller bowl filled with water on top of the ice and put your fresh clams into the bowl. Store in the refrigerator until you are ready to clean them.

As you put them into the bowl, examine your clams and throw out any that are broken and chipped.  If any of the clams are open, gently squeeze to close. If they do not close, they are dead and should be thrown out.
Remove the bowl of clams from the bowl of ice and place on the counter for 20 to 30 minutes. The clams will have dispelled some of the sand during their initial stay in the bowl.  So remove them one by one and throw out the sandy water. Refill the bowl with fresh cool water from your faucet. Add the clams and allow them clams to soak for another 20 to 30 minutes. The clams will clean themselves of any sand they have inside their shells.
Remove the shells from the water one at a time to a plate, preferably using tongs. Do not use a colander to strain the clams. (The sand and dirt they just extracted may settle on the bottom and go right back into the clam shells.)  Your clams are ready to cook. And here’s the recipe, the hardest part of which is cleaning the clams.
Recipe for Spaghettini and Tomatoes in Little Neck Clam Broth from La Cucina Italiana:
For four “Primi Piatti”  or 2 generous main courses. 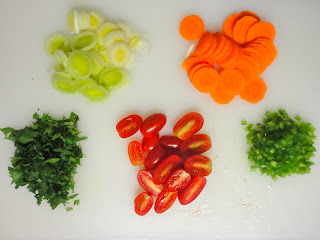 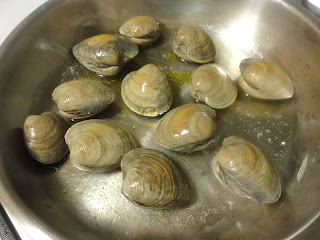 Bring a large pot of salted water to a boil. Meanwhile, in a large heavy pot with lid, combine clams, 1 1/2 tablespoons oil and wine. 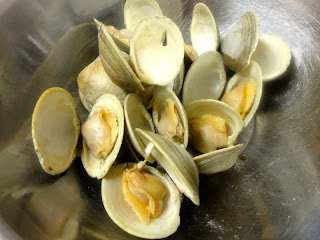 Cover and cook over high heat, shaking pan occasionally, just until clams open,  7 to 10 minutes. Discard  any clams that do not open). Reserving cooking liquid, transfer clams to a bowl, then strain cooking liquid into a bowl through a cheesecloth-lined fine-mesh sieve. Remove clams from shells; discard shells.
Cook pasta in the boiling water until al dente. Reserving 1 1/2 cups pasta cooking liquid, drain pasta and set aside (do not rinse). 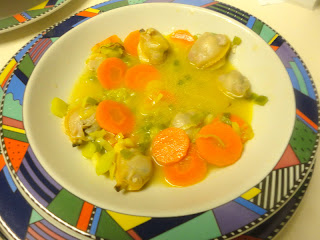 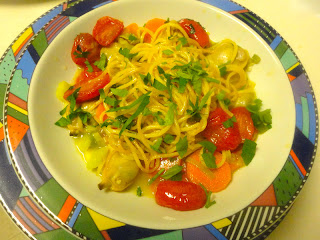