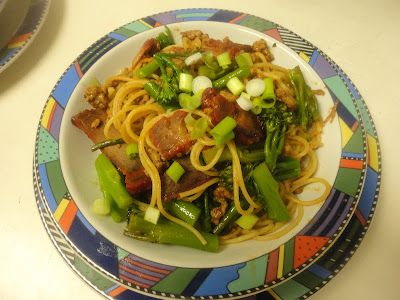 My friend Barbara gets practically apoplectic when she hears the name “Sandra Lee”.   Whether this has anything to do with the “Semi Homemade” hostess’ debacle over something Ms. Lee called her “Kwanzaa Cake”, I am not sure.  But given that Anthony Bourdain referred to the recipe as “an edible hate crime”, it very might well be.  Ms. Lee’s confection consisted of an angel food cake with chocolate and cinnamon flavored vanilla icing, corn nuts, popcorn, pumpkin seeds and apple pie filling.  One reviewer told the tale of taking the cake to a party only to have her fellow guests gag and spit it out.  And Mr. Bourdain of the ‘edible hate crime’ label said “The most terrifying thing I’ve seen is her making a Kwanzaa cake. Watch (the video clip) and tell me your eyeballs don’t burst into flames. It’s a war crime on television.  You’ll scream”.  Apparently, it still makes Barbara scream every time she hears the woman’s name.

What on earth does this have remotely to do with today’s recipe for a wonderful savory mix of noodles, broccolini and pork two ways—, a traditional Singaporean dish that I found in Food and Wine? Read on.
I am not at all about Semi Homemade.  I believe we are infinitely better off when we cook from scratch.  When we can exert total control over what we eat, we can avoid everything from huge quantities of sodium in packaged foods to fats and mystery oils and in the process, we can generally save money every time we cook.  But for this recipe I had to make one exception and another adaptation that may make you wonder where I got the crust to call these Asian noodles at all.
I’ll confess to the non-Homemade substitution only after explaining that I went and bought a small pork loin and the ground pork the recipe calls for fully intending to cook it and use it in this dish.  The ground pork was easy to make but what was also needed was something called Char Siu.  A traditional Cantonese recipe, this is a flavorful way of cooking both beef and pork.  Seasoned with honey, five-spice powder, bean curd, dark soy sauce, hoisin sauce and rice wine, the meat marinates overnight and when cooked turns the exterior of the meat a dark red.  But the key word here is ‘overnight’.  I wanted to cook this dish that night, not after an overnight.  And so I went to the nearest Chinese restaurant I could find and I bought an order of Char Siu, where it goes by the name “Cantonese Roast Pork”.  And just to be sure, I asked for it by its Chinese name, Char Siu. This move was a major time saver for sure and meant that I could make this dish for dinner that night.
Now about that Asian noodle thing:  I do live in a neighborhood where I could likely find yak butter if I felt so inclined.  And I can buy Chinese egg noodles but certainly not fresh ones as called for in the original recipe.  But the chef who adapted the dish for Food and Wine, Bryant Ng, gave permission to substitute linguine or spaghetti, both of which I had on hand.  I likely should have called the dish Asian Italian Noodles with Take-Out Roast Pork.  But who would want to make something that sounded like that?  Here’s the recipe:
Recipe for Asian Noodles with Roasted Pork from Food and Wine: 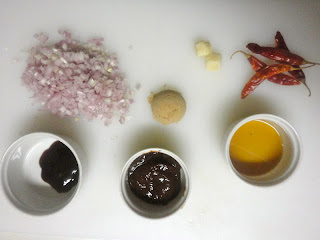 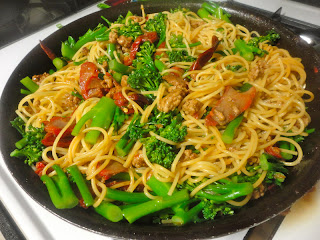