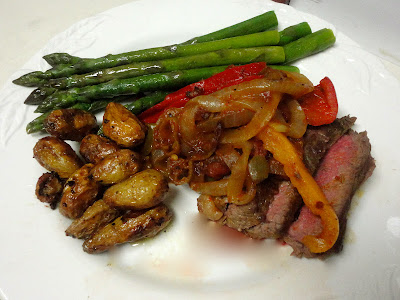 My friend Kate says that when she lived in Santa Fe NM, people used to refer to their local Whole Foods market as “Whole Paycheck”. The Whole Foods nearest me is certainly more expensive than most of the neighborhood groceries but then the produce is magnificent and almost everything in the store is either organic or close to it.  Then Trader Joe’s moved into the same geographical locale.  Everyone in the area noted the sizeable price differences on very much the same caliber of food. Trader Joe’s features any number of products with a green halo around them. Those that are not completely organic are pretty close to it.  But what price differences!  So it was not entirely a surprise when I went to Whole Foods this week and discovered a whole raft of Sale items.  Among these was Sirloin Steak at 6.99 a lb. marked down, according to the signage, from 12.99 a lb.  The price alone would have instantly attracted me.  But Whole Foods reputation for minimally processed foods is another huge draw. It’s reflected in everything the store does down to the wrapping my sirloin came in which is branded as “Great-Tasting Meat from Healthy Animals.’ Sold!   From there, it was just a matter of how to cook the steak in a new way.  I discovered a recipe for Steak Pizzaiola.
What, you may ask, is Steak Pizzaiola?  A Pizzaiolo is a Pizza cook. A Pizzaiola would be a female Pizza cook.  But I am totally baffled as to what this dish has to do with Pizza.  It does share its tomato base with the pie but that’s about all.  It’s a sauce that combines onions, pepperoncini—the pickled pepper of Italy– bell peppers and garlic, not exactly pizza toppings. Then too, there’s the matter of geography.  Pizza itself is Naples’ pride and joy.  It was invented there in the late 1800s.  But the recipe for Pizzaiola comes from Abruzzo, the region of Italy that is due East of Rome.  Abruzzo stretches from the Appenine Mountains to the Adriatic Sea but despite its seaside border, it is noted for its mountains. The mountains likely give beef cattle a great workout that toughens their meat.  Pizzaiola was invented to tenderize tougher and less expensive cuts of beef.  The meat is seared and then braised briefly in the sauce.  It’s awfully easy to make and takes no time so it’s perfect for a weeknight.  And you can feel holier than thou because it’s a complete serving of vegetables all by itself.   I served it with Whole Foods asparagus and, just to keep things even, what are sold as “Teeny Tiny Potatoes” from, you guessed it –Trader Joe’s.  Here’s the recipe:
Recipe for Steak Pizzaiola 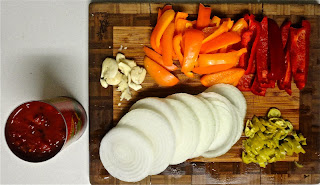 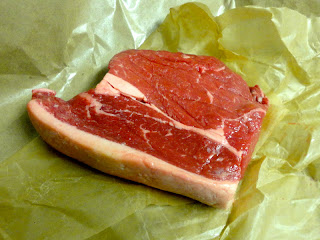 Sprinkle the steak all over with 1/4 teaspoon salt. Heat the olive oil in a large skillet over medium-high heat. Add the steak and sear until browned, about 2 minutes per side. Transfer to a plate. 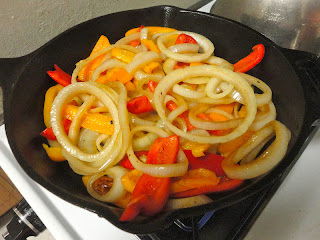 Add the garlic to the skillet. Once it sizzles, add the onion and bell peppers and cook, stirring occasionally, until they soften slightly, about 4 minutes. Add the pepperoncini, tomatoes, oregano, red pepper flakes and 3/4 cup water and stir to combine. 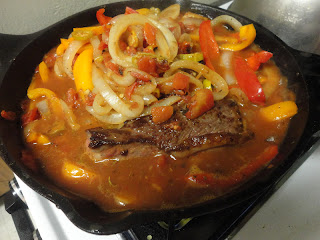 Bring to a rapid simmer, then nestle the steak in the sauce and simmer, turning once, until medium rare, about 7 minutes. Transfer the steak to a cutting board and let rest about 5 minutes. Continue simmering the sauce until thickened, about 3 more minutes.
Thinly slice the steak against the grain and divide among plates. Top with the sauce and parsley.
Author: Monte Mathews
Filed Under: Abruzzese Cuisine, Beef Dishes, Italian Cuisine, Steak, Steak Pizzaiola, Weeknight Dinners
Orecchiette with Spicy Merguez Sausage
Pork Cutlets with Pine Nuts and Prosciutto “Lombatine ‘Vestite’ ai Pinoli”