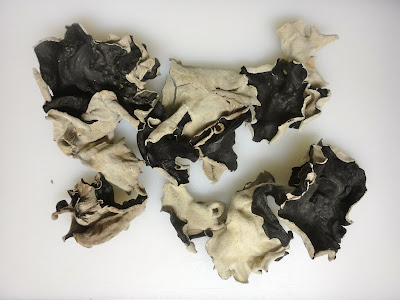 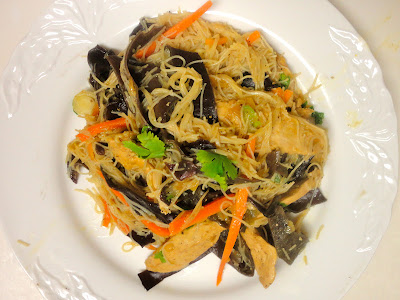 One of the great joys of cooking has to be the amazing things you learn when you use an ingredient that is new to you.  In this case, our dear friend Richard arrived from Hong Kong recently and presented us with a sealed plastic bag of Wood Ear or Tree Ear dried mushrooms.  He brought us so many, he could have used the bag as a neck pillow on his long flight from China.  They were intriguing–almost white on one side and then practically black on the other.   While I marveled at the sight of them, I couldn’t help wonder why Richard had appeared with this very bulky gift.  Turns out, Richard, an avid Chewing the Fat reader, remembered something I wrote in November 2010 in a post about Shun Lee West, our neighborhood Chinese restaurant.  http://chewingthefat.us.com/2010/11/long-ago-visit-to-shun-lee-and-my-take.htmlis where you’ll find the post.  But what was missing from the recipe for Shun Lee’s Sichuan Shrimp were, you guessed it, Wood Ear or Tree Tea mushrooms.
Truth be told, in China, Wood Ears or Tree Teas are usually referred to, not as mushrooms, but as “fungus”.  When you examine one, you can tell why.  They look for all the world as if they’d grown attached to something else, which indeed they were.  They are attached to tree trunks, especially Elder, where they grow on both living and dead wood. Despite the fact that they are grown world-wide throughout the year in temperate climates, they’ve never achieved great popularity in the west.  If you’re familiar with them at all, it is likely as an ingredient in Hot and Sour Soup.  But even there, they are often replaced by their much more common cousins, the shitake.  In China, however, the wood ear is still a popular culinary ingredient.  And they are also used in Chinese medicine.  They’ve been proven to have anti-tumor, hypoglycemic, anti-coagulant and cholesterol-lowering properties.  But let’s back away from the medicine chest and head back into the kitchen. 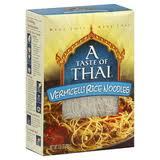 I have four Chinese cookbooks in my library.  I went through each one of them and, with the exception of Chef Michael Tong (of Shun Lee West fame) whose Sichuan Shrimp recipe called for Wood Ears, I could find nothing in any of the four except recipes for Hot and Sour Soup. I happen to love the stuff.  But I was looking for a dinner dish so I went on an internet search.  I did find several stir-fries and settled on this one.  It’s from a site called yummly.com which rather incredibly uses “Every recipe in the World” as its tag. That’s where I found our about Sotanghon.  If the title of this recipe scared you off, you should know that Sotanghon is vermicelli.  I’m sorry, but I can’t bring myself to translate something Asian into Italian.  Just doesn’t seem right to me. Until of course I went looking for these thinner-than-angel hair noodles in my market.  I searched high and low –among fresh pasta and dried. Only when I got to the Asian aisle did I find what I wanted.  And guess what? The package was labelled A Taste of Thai, Vermicelli Rice Noodles. Gluten-free at that! 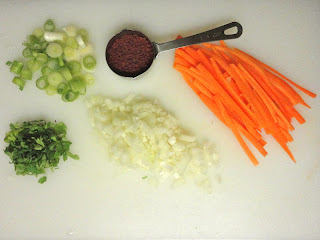 The recipe is a simple stir-fry. If you’ve done one before, you know the cooking time is nihil, it’s the prep that takes up the time. In this case, it was an hour start to finish.  You get everything ‘mise en place’ at the start so that it all comes together very quickly once you hit the stove.  If you keep any kind of an Asian larder, you likely have all it takes right there.  The only ingredient that may be new to you are the Annatto Seeds.  And of course, the Wood Tree mushrooms. I’d love to tell you the Annatto is optional but it adds so much to the dish. That a dusky, rich and earthy flavor comes from a spice that looks for all the world like the gravel at the bottom of a fish tank, is quite a surprise.  Annatto or Anchiote in Spanish, isn’t eaten by itself. Rather it is used to suffuse the minimal amount of oil in this dish with a vibrant red color.  It also gives off some heat, without which this dish would be fairly bland.  You can find Annatto in the Goya section of your super markets or you can order it on-line at www.amazon.com. 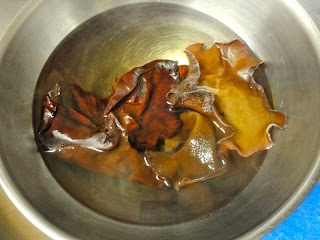 Now back to the Wood Ears.  They will amaze you.  They likely quintuple in size once put through a hot water bath. They also change color and lose their black and whiteness to a rich shade of brown.  It’s hard to know how much the recommended half a cup of the things really is. I’d say two to four would be a gracious plenty.  Once they’re soaked, cut them into long strips and follow the recipe that follows here: Oh, and one other thing: If you can’t find Wood Ears, you can go with dried Oyster Mushrooms which are infinitely easier to find.  Here’s the recipe:
Recipe for Sotanghon with Chicken and Wood Ear Mushrooms:
1 cup wood ear mushrooms (dried wood ear mushrooms soaked in hot water   for 20 minutes. (Dried oyster mushrooms are good substitute)
1/4 cup annatto seeds
2-5 cups chicken stock
3 tbsps oil (cooking)
2 tbsps soy sauce
1 tbsp oyster sauce
salt
Author: Monte Mathews
Filed Under: 30 Minute Meals, Asian Food, Chinese Cooking, Hong Kong, Richard Kligler, Stir-Fries, Vermicelli with Chicken and Wood Ear Mushrooms
Parmesan Crusted Rack of Lamb
Pork Cutlets with Pine Nuts and Prosciutto “Lombatine ‘Vestite’ ai Pinoli”

2 thoughts on “Sotanghon with Chicken and Wood Ear Mushrooms”