I love a good Osso Buco.  It’s a wonderful weeknight dinner party dish because you can make it one night and serve it the next and it will only improve with its overnight rest.  But I had never heard of a lamb version of this classic Veal dish.  Then on our pre-holiday Costco run, I saw Lamb Osso Buco in the meat case.  I’ve had great luck with all the Australian lamb at the store—the chops are trimmed, the racks are oven-ready.  I do understand that it’s come an awfully long way to get here but it seems none the worse for its journey. So I bought some lamb osso buco and Thanksgiving Eve, I served it to our house guests on a bed of Yukon Gold mashed potatoes.  They loved it. But I didn’t.  I was disappointed to see that only difference between the Lamb and Veal versions was the lamb.  That didn’t seem right. So I set about to invent my own lamb osso buco. 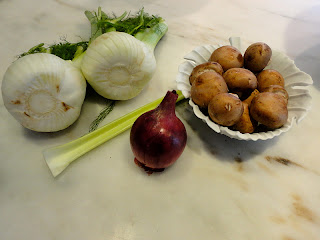 First, I eschewed some of the vegetables in the veal version—out went the carrots, in went Fennel.  I kept the celery and bailed on the orange zest.  I went for a red onion. I put in some baby bella mushrooms.  I added Aleppo Red Pepper flakes to give it a lift.  I wanted to avoid the tomato that is in virtually every veal version.  But in the end, the stew seemed to really need the richness of the tomato in the sauce.  I searched around for other ideas and the one that stuck in my mind was a lamb ragu that a chef named Edward Lee had published in the final issue of Gourmet.

Now if you are a viewer of “Top Chef”, you are well-acquainted with Mr. Lee as he was one of the top five contestants on this year’s show.  Chef Lee has an only-in-America background. Korean-American, he grew up in Brooklyn and trained in classic French cuisine. In 2001, he embarked on a cross country trip and wound up in Louisville, Kentucky right in time for the Derby.  A friend suggested going to a well-known local restaurant to see if he could find work on what’s the busiest week of the year for Louisville restaurants.  He did and its chef owner was so taken with Chef Lee’s passion and considerable skills that within a year, he offered to sell him the restaurant.  Called 610 Magnolia (Between 6th and 7th Streets, Louisville KY, Tel: 502 636- 0783 ), Chef Lee has put his own stamp on the place. Mixing his Korean roots, his French training and the cooking of his adopted Kentucky home, the chef has created a contemporary southern menu, winning 3 James Beard awards along the way.

The idea that I took from Chef Lee was his serving his lamb stew atop a bed of cheese grits.  Now I really have a weakness for cheese grits and a profound antipathy to their close Italian cousin, polenta. I find polenta so heavy and, candidly, tasteless.  So I borrowed the chef’s idea and served my concoction with grits. It hardly sat atop the grits, my stew sank into them so every forkful combined the taste and texture of the grits with the richness of the lamb.   The other major difference between my Lamb Osso Buco and my recipe for the veal version was that at the end of the stewing time, I removed the lamb bones.  In Veal Osso Buco, this would be heresy; the marrow is one of the great treats of the dish.  Lamb marrow is simply not the same stuff and not very good at all.
I’m very proud of this dish.  It is one of those all-day Saturday or Sunday affairs that perfume your kitchen, requiring only an occasional stir in the three to three half hours it takes to cook.  You can serve it that night or wait until the middle of the week. It will only get better.   And if you’ve never cooked Grits before, they’re not at all difficult, certainly far less so than polenta.  And if you are not a Costco shopper, you could undoubtedly substitute lamb shanks and achieve great results.  Here’s the recipe:
Recipe for Lamb Osso Buco Ragu
Yields 4 servings 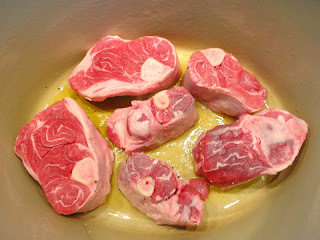 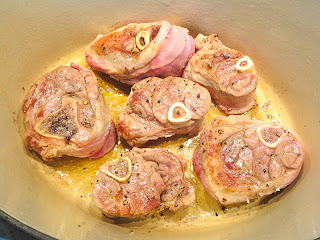 First Make the ragù:
Pat lamb dry and season with kosher salt (rounded 1/2 teaspoon) and 1/4 teaspoon pepper. Heat 2 tablespoons oil in a 5-quart heavy pot over medium-high heat until it shimmers. Brown shanks on all sides, 6 to 7 minutes, then transfer to paper towels to drain. 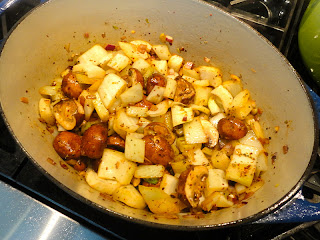 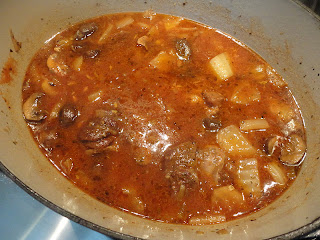 Return lamb to pot with stock, tomato sauce, vinegar, Worcestershire sauce, soy sauce, and honey and bring to a boil. Reduce heat to low and simmer, covered, stirring occasionally, until meat is very tender, 3 to 3 1/2 hours.
Remove meat from bones, discarding bones, and skim fat from cooking liquid, then return meat to pot. Simmer ragù, uncovered, stirring frequently, 15 minutes.
Make grits while ragù finishes cooking:
Bring stock, water, and milk to a boil in a 2-quart heavy saucepan. Add grits in a stream, whisking, then cook over low heat, uncovered, stirring frequently, until grits are tender and thickened to the consistency of loose oatmeal, about 20 minutes.
Toward end of cooking, finely grate one fourth of cheese (1 cup) and add to grits along with sour cream, sea salt, and pepper to taste. Stir until cheese has melted. If grits are too thick, stir in some additional milk.
Serve ragù over grits and top with shavings of cheese.
Author: Monte Mathews
Filed Under: 610 Magnolia Restaurant, Dinner Party Dishes, Edward Lee, Lamb Osso Buco Ragu, Stews
What to serve for Chinese New Year? David Chang’s Bo Ssam, slow-roasted Pork with Ginger-Scallion Sauce, Ssam Sauce, Kimchi and Rice
Birthday Party Paella