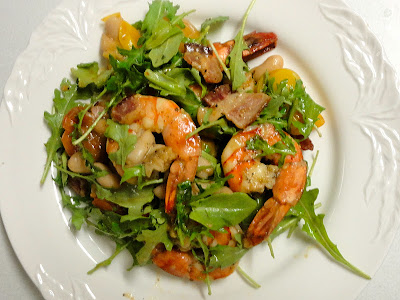 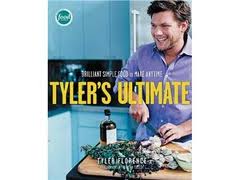 If ever a cookbook cover said it all, it’s this: Brilliant Simple Food to Make Anytime.  That’s what Tyler Florence’s “Tyler’s Ultimate” (Clarkson Potter 2006) says and it couldn’t be more true.  Take for instance this deliciously satisfying dinner salad.  It would be appropriate to serve in the dead of summer but it was a wonderful treat in January.  It could be the centerpiece of a ladies lunch but we used it as dinner for the two of us men.  And as far as ‘simple’ goes, it calls for just two baking sheets and is on the table in a half hour.  Now that’s brilliant. 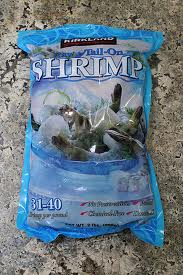 I’ve waxed about Costco’s Frozen Shrimp before and how great it is to reach into the freezer and extract just the number of shrimp you need. But Costco is not the only place to buy these bags of frozen shrimp.  Look for them in your supermarket.  They can really make life easier.  If you can remember, take them out in the morning, put them on some paper towel and let them defrost in the refrigerator until you get home.  But even if you’ve forgotten that step, you can defrost them in the microwave and you’re set. In this recipe, they share their baking sheet with bacon which crisps while the shrimp roast.  The second baking sheet is busily holding the Cherry tomatoes, a most welcome sight in the dead of winter.  I found some multi-colored ones that not only tasted great but gave the dish a pop of color.  And for all their prominence in the recipe title, there’s nothing simpler than opening a can of cannellini beans and draining them under hot water before adding them to this dish.  Tyler’s original recipe called for Watercress which you can certainly substitute here—you just trim the stems just above the rubber band.  I opted for baby arugula which has some bite and which is favored over watercress in our household.  I am sure you could also use baby spinach. One final thing: I halved this recipe and it worked beautifully.  Here’s it is:
Recipe for White Bean and Roasted Shrimp Salad with Cherry Tomato Vinaigrette adapted from Tyler Florence.
Serves 4 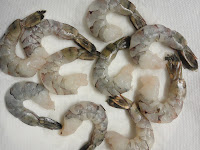 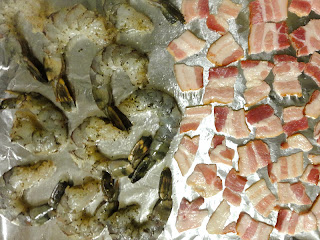 Arrange the shrimp in a single layer on half of a large baking sheet and put the bacon pieces on the other half. Drizzle with olive oil and season the shrimp with salt and pepper over all. Stick that into the oven and roast for 12 to 15 minutes, or until the shrimp are cooked through and the bacon is crisp and browned and the fat has been rendered. 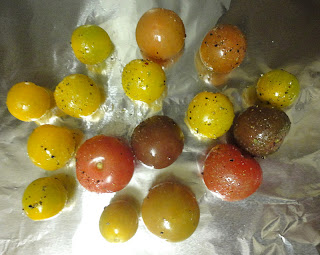 At the same time, on a second baking sheet, drizzle the tomatoes with olive oil, sprinkle with salt and pepper, and toss. Put the tomatoes in the oven and roast until they burst, about 10 minutes. 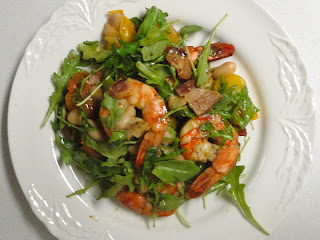