In 1966, Truman Capote was flush with success.  His ‘non-fiction novel’, the term he used to describe “In Cold Blood”, was a hit.  He decided to throw himself a party.    On the night of November 28th, exactly 45 years ago, Truman had invited 540 of the most glittering people in the world to his masked “Black and White Ball” at New York’s Plaza Hotel. He billed it as a kind of “Coming Out Party” for Katherine Graham who had taken over as President of the Washington Post Company following the suicide of her husband Phillip some three years earlier.  In point of fact, it was more likely a “Coming Out Party” for Truman himself.  It was hugely publicized before it took place so that when it did, the Plaza was mobbed with Papparazzi and just plain folks. They all turned out the see the rich and famous in their spectacular Black and White costumes and masks.   At midnight, supper was served.  The menu had only one main course.  Chicken Hash.

Chicken Hash?  Well if you’ve ever tasted the food that came out of the Plaza Hotel’s catering department, you might have found that a wise choice.  I distinctly remember going there for a benefit for ‘The Friends of Oxford’ (University).  Every ex-pat Brit in New York was packed into the ballroom that had been recently gilded by Ivanna Trump, the then wife of the then owner, Donald Trump.  (In the department of wretched excess, Mrs. Trump was at the head of the class.)  Into this sea of Britons and their American friends, waiters carried platters of overcooked beef, tasteless vegetables and potato croquettes you could have used as tennis balls.  The food was so bad that even the Brits balked at eating it.  If there was one thing they knew about when they tasted it, it was what good beef is.

Truman, it seemed, had known the limitations of the Plaza kitchens.  He chose something so homespun and forgiving, they couldn’t really screw it up.  Since Ina Garten would have been about 18 when the Ball took place, Truman couldn’t have had the supreme good fortune of serving Ina’s recipe for Chicken Hash.  But I have on numerous occasions, most recently on a cold night when I had half a roast chicken left over and a yearning for some real comfort food. This dish with its crispy potatoes and onions, its lovely chunks of red pepper and breast of chicken all laced together with a very flavorful spice mix, is absolutely delicious.  Ina’s recipe calls for roasting bone-in chicken breasts rather than using leftovers.  I’ve done it both ways and believe me when I say, it’s worth the effort to roast the breasts, it just takes a little longer.  Even with the roasting, the dinner takes just over an hour to make and the prep time is about 45 minutes all told. So raise a glass to both Ina and Truman and make this delicious dish. Here is the recipe:
Ina Garten’s Chicken Hash

1 tablespoon tomato paste
4 minced scallions, white and green parts
Sour cream, and sliced lemons, for serving
Preheat the oven to 350 degrees F.
Place the on a baking sheet. Loosen the skin from the meat with your fingers, leaving one side attached. Place 4 basil leaves under the skin of each chicken breast. Pull the skin over as much of the meat as possible so the chicken won’t dry out. With your hands, rub each piece with olive oil and sprinkle very generously with salt and pepper. Bake the chicken for 35 to 40 minutes, until the skin is lightly browned and the chicken is just cooked through. Set aside until cool enough to handle, then remove the meat from the bones. Cut the chicken in large dice pieces and set aside. 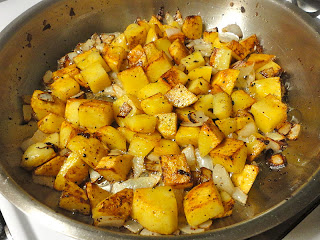 Melt 4 tablespoons of the butter in a large saute pan. Add the potatoes and onions, 1 teaspoon salt and 1/2 teaspoon pepper and saute over medium heat for about 10 minutes, until evenly browned and cooked through. 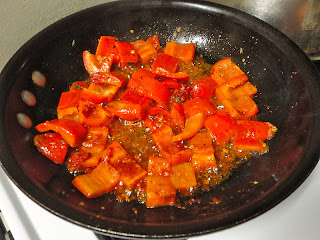 In a separate saute pan, melt the remaining 2 tablespoons of butter. Add the red peppers, garlic, thyme, paprika, tomato paste, 1 teaspoon salt and 1/2 teaspoon pepper and saute over medium heat for about 5 minutes, until the edges of the peppers are seared. 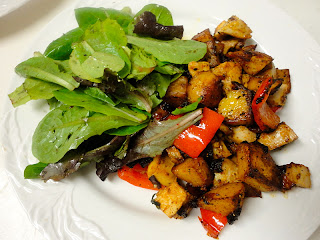 Add the chicken and the pepper mixture to the potatoesand heat through. Add the scallions and parsley, toss together and place on a serving platter.