For my final Chewing the Fat post of the year, I wanted to share a recipe I developed about 25 years ago.  It appeared in Saveur magazine and if you google it, you’ll find it on several of recipe sites.  To me, what’s odd is that there’s no explanation on any of these sites that gives any indication of why it is called what it is.  The Saveur article gave the whole tale but neither the recipe nor the story (nor its author, by the way), made it onto www.saveur.com  So here is the tale and the recipe.  I just made it for our Holiday Open House and once again, it was a huge hit.
“Among the delicacies of Jewish American cooking, chopped liver is surely one of the greatest.  Its ingredients are humble:  Chicken livers, onions, eggs, salt, pepper, and schmaltz.  As anyone with a knowledge of Jewish American idiom will tell you, schmaltz and its adjectival schmaltzy means something that is over-done, over-decorated, over-emotional, over-the-top.  Schmaltz is chicken fat.  And when you put it together with the other ingredients in chopped liver, you have an appetizer that is unquestionably over the top.   It is a marvelous taste, rich and satisfying, and rivaling any great pate.
One can freeze chicken fat every time one buys a chicken and then create true Jewish chopped liver.  However, the schmaltz part threw me.  Now I’d been introduced to this delicious dish by my friend Sandra who made her Jewish mother, Fanny’s, chopped liver for me.  I wanted to make my own. But in the absence of schmaltz, Sandra recommended I speak to her mother for advice.
So I telephoned Fanny Fanny (as she was called because she repeated everything twice).  She lived in Miami Beach and she was only too happy to share her recipe.  However, when we got to the schmaltz part, and I explained my dilemma, she said: “Dollink, dollink, you can use other kinds of fat, other kinds of fat. Think. Think.” “Butter?” I offered.  “Butter? Butter?  No, think again.”  “Well” said I, “would bacon fat be good ?”.  After a silence so profound that I thought I could hear the Atlantic Ocean in the background, Fanny replied: “You could, You could.  But you didn’t hear it from me, no, you didn’t hear it from me.”
But absent the schmaltz — and the religious laws of Judaism — I adapted what I knew to this recipe.  It uses both bacon and bacon fat and begs Fanny’s forgiveness.  And I have to admit, my Chicken Liver is just as schmaltzy as the next guy’s, just as schmaltzy as the next guy’s.
Recipe for Episcopalian Chopped Liver
1 LB chicken livers and their liquor
1/2 pound bacon cut into 1 inch pieces
2 large onions in large dice
6 hard cooked eggs
Kosher Salt and Freshly Ground Pepper 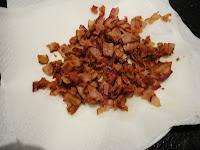 1. Cook the bacon in a large skillet over low heat until it is crisp and brown.  With a slotted spoon, remove the bacon to a bowl and reserve.
2. Put the onions into the bacon fat and cook at low heat until they are wilted and translucent but not browned.  Add salt and pepper to the cooking onions.
3. Hard cook the eggs. Use the Julia Child method.  Pierce the round end of each egg with a pin.  Put the eggs in a pan filled with cold water.  Bring the water to a rolling boil.  Then remove eggs from heat for precisely 17 minutes.  Put the eggs in an ice water bath.  Leave them sit while you continue cooking the livers.  Then peel them under cold water. 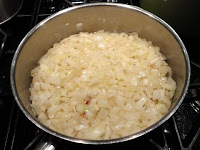 4. With a slotted spoon, transfer the cooked onions to a bowl and reserve.
5. Add the chicken livers to the skillet and slowly cook them until all the pink is gone.  Add salt and pepper to taste.
6. When the chicken livers are cooked, let them cool slightly. 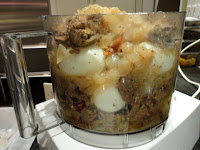 7. In the bowl of a food processor fitted with the steel blade, put layers of chicken livers, eggs, bacon, and onions. Pulse on and off. Do not over process. You want a rather coarse pate.  Taste for seasoning adding more pepper and salt if necessary.
8. Traditionally, chopped liver should be served at room temperature–not chilled from the refrigerator.  If you do make this recipe in advance, you should bring the chopped liver to room temperature before serving.  Serve on bagel crisps or with a baguette.
Makes 4 cups.
Author: Monte Mathews
Filed Under: Appetizers, Episcopalian Chopped Liver, Jewish Food, Party Food
Savory Ham and Cheese Bread
Roasted Asparagus with Lardons and Fried Egg Adapted from Almond Restaurant in Bridgehampton NY