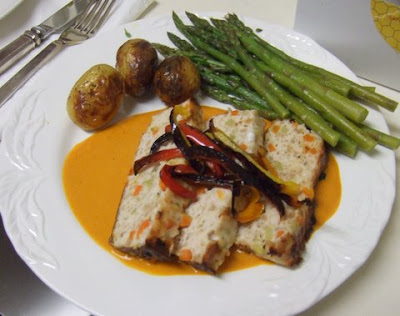 I first wrote this post way back in 2010 when the blog was still quite new.  This year, Memorial Day put a crimp in my writing as we were up to our ears in gardening and celebrating the start of our being in the Hamptons more and more. So when I went searching for something to share with you today, I came across this recipe. It surprised me to see that it never attracted an audience because it really is worth making.  Even if you, like me, have very little fondness for ground turkey.  I’ll grant all those who extoll its low-fat virtues that it’s about as low as you can go, but to me it’s also low on taste and low on juice and low on my list of things I love to cook.  But an article in an old Food and Wine intrigued me.  It was entitled “French food that won’t make you fat”.  Now there’s something I can sink my teeth into.  And it has a very solid pedigree.  Its inventor is the chef Sandro Gamba who cooked under Joel Robichon and Alain Ducasse, was Food and Wine magazine’s Best New Chef of 2001. 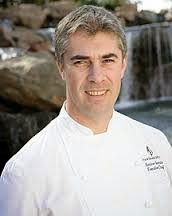 Apparently tired of rendering French classics at Nomi, in Chicago’s Park Hyatt Hotel, Chef Gamba quit his job and began to look for a place where he could cook “cleaner” and healthier versions of his mentors’ specialties.  He landed at the Four Seasons in Westlake Village, CA which welcomed his healthy approach at all five restaurants on the property.  Unfortunately, visa problems sent him back to France where he spent two years at Sofitel headquarters as their Corporate Chef.  From there he went on to Geneva where he was the Food and Beverage director at the Intercontinental. Now, and for the last two years, he’s been the Executive Chef at the Emirates Palace Hotel in Abu Dhabi.  I have to wonder if he’s introduced his staff of 300 (!) to the virtues of his turkey meatloaf.  But I do know I’d like to re-introduce it to you.
The key here is trying to find a way to keep the lean turkey meat moist without loading it with fat or calories.  Enter cottage cheese.  Now before you turn the page, you should know you’ll won’t be at all aware of the stuff in the finished dish, although the flecks of it before the loaf is cooked are a little off-putting.  But forge ahead and make this.  The Red Pepper Sauce is very easy to make and add tremendously to the color and the flavor of the dish.  Here’s the recipe: 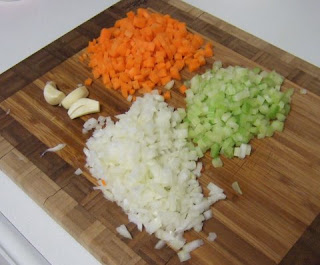 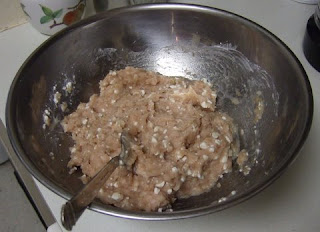 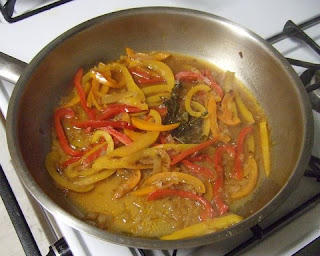 Preheat the oven to 400°. Lightly oil a 9-by-5-inch metal loaf pan. In a skillet, heat 2 tablespoons of the oil. Add the carrot, celery, garlic and two-thirds of the onion; season with salt and white pepper and cook over moderate heat, stirring, until softened, about 10 minutes. Let cool.
Add the turkey and cooked vegetables to a large bowl. Add the egg whites, panko, cottage cheese, 2 teaspoons of salt and 1/2 teaspoon of white pepper. Knead until blended and put into the metal pan. Place the pans on a baking sheet and bake in the upper third of the oven for 35 minutes or until an instant-read thermometer registers 160°. Remove from the oven and preheat the broiler. 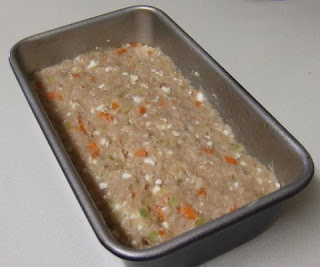 Meanwhile, in a skillet, heat 2 tablespoons of the oil. Add two-thirds of the red peppers, the remaining onion and the thyme. Cover and cook over moderate heat until softened, 10 minutes. Add the water, cover and simmer until the peppers are very tender, 7 minutes. Discard the thyme. Transfer the contents of the skillet to a blender, add the half-and-half and puree. Season with salt and pepper. 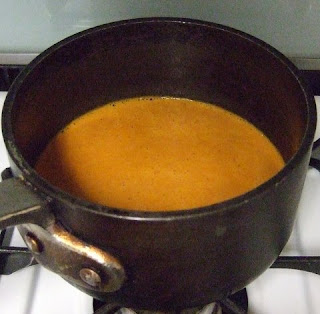 In a skillet, heat the remaining 1 tablespoon of oil. Add the remaining peppers and cook over moderate heat until softened, 10 minutes. Season with salt and pepper.
Broil the meat loaves 4 inches from the heat until browned, 2 minutes. Turn the loaves out onto a plate and cut into 1/2-inch slices. Spoon the pepper sauce onto plates. Top with the meat loaf and peppers. Serve with new potatoes and asparagus if you like.