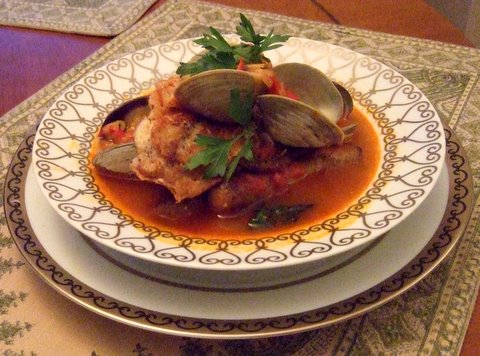 You can’t sit down to write a recipe without wondering what constitutes out-and-out thievery.  There is no possible way that you yourself could invent something so absolutely new and startling that you could proudly call it yours and yours alone.   Everything has to have come from some knowledge that you picked up from someone or somewhere else.  But giving credit where it is due isn’t the way of some major talents in the food galaxy.  I can’t run this down but it sounds apocryphal enough to be true:  One of the greatest doyennes of cooking is said to have recognized so many of the recipes of a then younger upstart that she remarked ‘’she is a superb copier”.  But at what point are we not all copiers, superb or not?
One theory holds that if three ingredients are different, whatever recipe it is, is therefore original.  Another is that as long as you attribute your recipe to its original developer, you’re covered.   I suppose if you went back to the very beginnings, you’d have to give credit to the man who invented fire or discovered that you could boil water.  But if you go to the rules governing Recipe contests, here’s what you’ll find:  Changing one or two ingredients in someone else’s recipe does not make it original.  And if you have the temerity to change the ingredients and still lift the instructions for the recipe from whatever it is you made the substitutions to, that isn’t originality,  it’s plagiarism.  And while recipes cannot be copyrighted, cookbooks most certainly can.  Which brings us to the great Alfred Portale, who must be given a lot of credit for the Snapper recipe here.

In his superb “Gotham Bar and Grill Cookbook” (Doubleday 1997), Chef Portale exhorts his readers to use the book as “ a starting point, for the recipes and techniques to become the building blocks and inspiration for your own creations.”  That is what happened here and it is that riff on Alfred that is at the heart of this recipe. 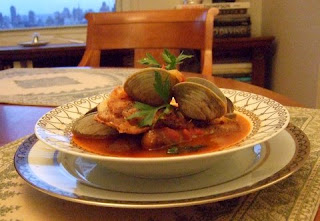 Alfred is well-known for having been the creator of the “Tower of Food” approach in which cooked ingredients are literally piled on top of each other to form a single tower of food.  I think you can see from this picture that I have not quite mastered his technique.  But I think you’ll also agree that this is one impressive looking meal. And it is fragrant, slightly spicy and combines a sauce that is Spanish to its core with fish and sausage, a time-honored pairing.  And what should please you no end is that it is really not at all hard to make.   If you make the Romesco ahead of time, it actually all comes together in under 30 minutes!  So serve your friends  this dish and I can almost guarantee they’ll be amazed at your cooking  process.  Here is the recipe:
Recipe for Red Snapper with Littleneck Clams, Merguez sausage and Romesco 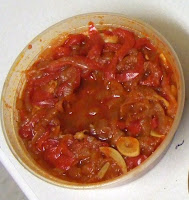 Make the Romesco first.  It can be held at room temperature for four hours. Similarly, the spinach may also be made in advance and held until needed.
The rest of the dish, the fish, sausage and clams require last minute attention and take relatively little time to make—about 10 minutes in all.
For the Romesco:
2 tbsp olive oil
1 large onion, halved and thinly sliced
1 large red bell pepper, seeded and thinly sliced
8 large cloves of garlic, thinly sliced.
1 ½ tbsp. sweet Hungarian paprika
1 tsp. red pepper flakes
Kosher or other Coarse Salt
For the Spinach:
1 lb. triple-washed baby spinach
2 tbsp unsalted butter.
Salt and Pepper
For the Snapper and Sausage:
Merguez is a spicy lamb sausage with North African roots.  D’Artignan makes a good one that I get at Fairway.   You could substitute an Italian sweet or spicy sausage to great effect.
4  (6 ounce) red snapper fillets, skin removed
Coarse salt and freshly ground pepper
3 tbsp. Olive Oil
8 ounces of Merguez sausage cut into 4 inch lengths. 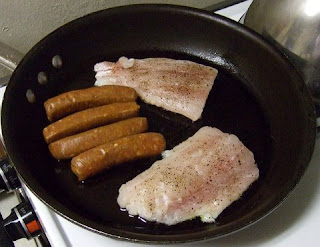 Putting it all together: 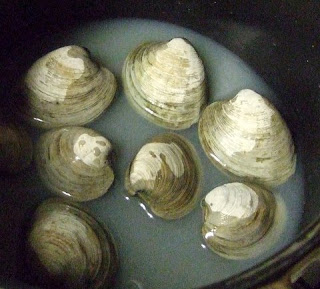 12 Little Neck Clams
1 cup of Clam Broth
1 cup of diced tomatoes  ( I use Pomi)
Chopped Parsley and Cilantro for garnish
1.    While the red snapper and sausage are cooking, place the clams and broth in a large saucepan,  cover and cook over high heat until all the clams are opened, about 4 minutes.  Add the romesco and stir until heated through, about 1 minute. 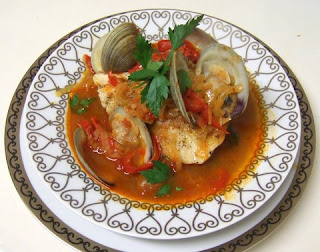 2.    Mound the spinach, a couple of clams and the tomatoes in 4 warmed, deep dish soup bowls.  Place the sausages on top of this mound.  Then place a red snapper fillet on top of that and spoon the romesco and remaining clams on top of each. Add a ladle of the clam broth to each bowl, garnish with parsley and cilantro and serve.  Makes 4 portions.