Vietnamese Shrimp and Pork Belly with Sweet and Spicy Sauce 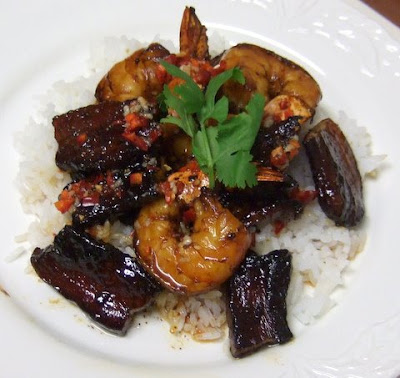 Ever since my last trip to Hong Kong, where, on our last night there, we went to a Vietnamese Restaurant called “Pho Lemon” (25 Elgin St. Central, TEL: 2523-8272) I have wanted to cook Vietnamese food.  There’s likely nowhere on earth where you can find such a confluence of Asian cuisine as there is in Hong Kong.  During my last trip there, we’d eaten Japanese, Korean, Malaysian and of course, Chinese food from Hunanese to Cantonese.  Fantastic food in some of the finest places in the city.   So when, on that particular night, I had a roast chicken that was one of the finest I had ever eaten, I was determined to learn how to cook it.

When I got home, I almost immediately bought a book called  “Authentic Recipes from Viet Nam”, by Trieu Thi Choi, Marcel Isaak and Heinz Von Holzen.  Whatever you do, stay away from it.
If it’s true that too many cooks spoil the broth, this book has at least two too many.  It’s one of those cookbooks where the pictures are far superior to any of its recipes.  No matter what I tried to make —  from Pho Bo, Beef Noodle soup to Banh Xeo, a rice flour crepe dish, to Ga Ro Ti, my much sought after Roast Chicken– they were all duds.
As Julia Child said, “A cookbook is only as good as its worst recipe.”  In this case, I grew increasingly exasperated at the amount of food being tossed out because the recipes simply did not work.
But I have soldiered on and finally, thanks to an article in May’s Bon Appetit, I struck culinary gold.  This recipe came from a restaurant in Toulouse, France called L’Empereur de Hue.  As the Viet Namese have spread far and wide so has their cuisine.
This is a wonderful dish!  And I promise you it is very easy to make.  You do have to stay in the kitchen for a half hour but the time will be very well spent.
I fell in love with Pork Belly several years ago at Joe’s Restaurant in Venice, CA.  My then work partner, Carl called it “Bacon Steak” and I seem to remember going back there a second time only to discover it was not on the regular menu.  Well, I can tell you, this dish will be on our menu regularly.
Shrimp are a staple in our house.  We buy them frozen at Costco in varying sizes.  They are easy to defrost a few at a time, they keep for a very long time, and they’re easy to cook to perfection whether roasted or poached. They’re also a perfect foil to the richness of the caramelized pork in this dish.
Pork Belly, as you’ve undoubtedly noticed, is all over menus all over the place.   And why not?  It’s part of the bacon craze because Pork Belly is simply unsmoked, raw bacon.  It was easy to find, organic and inexpensive at Whole Foods — $4.99 lb.  So add to this dish ‘economical’ too.  I served it on a bed of Jasmine Rice.  Here’s the recipe:
Recipe for Vietnamese Shrimp and Pork Belly with a Sweet and Spicy Sauce
For the Sauce: 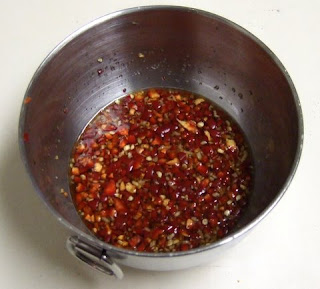 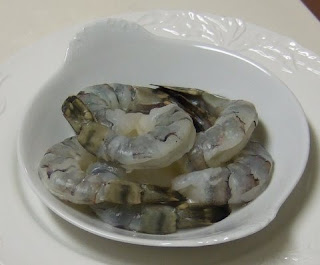 For the Pork Belly and Shrimp: 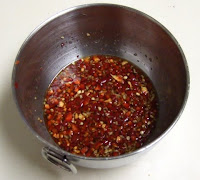 Whisk all ingredients in small bowl. Let stand at room temp for at least 30 mins. and up to 2 hours
Prepare Rice according to package instructions.

To make the Pork Belly and Shrimp: 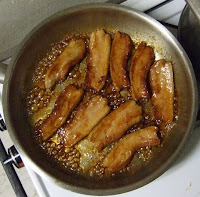 Sprinkle sugar over bottom of heavy large skillet NOT nonstick. Place over medium heat and cook without stirring until sugar melts, then caramelizes to medium golden color, occasionally swirling pan, for about 7 min. 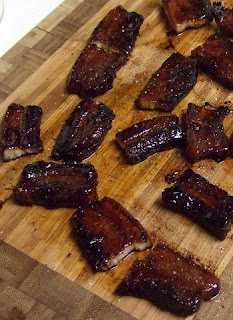 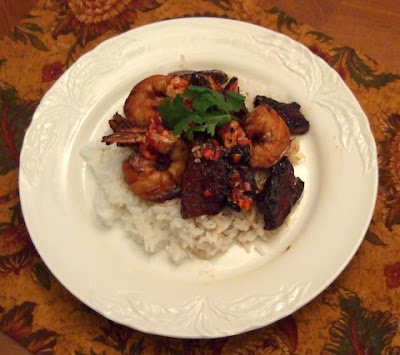 Return skillet with drippings to med-high heat. Add shrimp, saute until golden turning once, about 2 min. Return pork to skillet. Toss until shrimp are just opaque in center, about 1 min. Mound on platter. Sprinkle with onions and cilantro. Serve with rice and sauce. Serves 4.