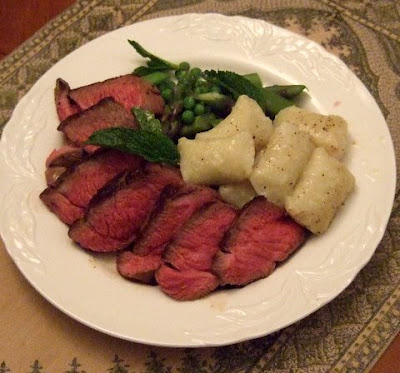 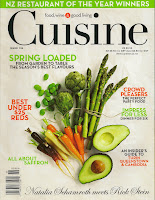 Last winter, when I was in my Food Writing Boot Camp, I bought any number of food magazines from all over the world.  From New Zealand came “Cuisine”, a very lavishly illustrated and beautiful publication that was published last September in Auckland.  Given its Southern Hemisphere location, it was completely counter-seasonal and featured recipes devoted to the coming of Spring.   So now that Spring is upon us here, I took it out and looked at it with fresh eyes.  In it, I found a recipe for Poached Lamb.  If there was anywhere on earth where they ought to know a thing or two about lamb, it is most certainly New Zealand.

New Zealand is famously known for having more sheep than people.  Actually it runs about 10 to one.  In 2009, there were 4.2 million New Zealanders sharing their country with some 40,000,000 sheep!  I remember when a couple of my colleagues in the Advertising business went to New Zealand to shoot a television commercial.  When they came home, their client became so fixated on the hundreds of tiny little white dots way in the background of one of their scenes, he insisted that the dots be digitally removed.  The dots of course were sheep.  I am not sure of the outcome of this story because digitally eliminating sheep is a very expensive proposition. Hopefully he came to his senses.  But if not, I have found a wonderful new technique for cooking them with this recipe from a woman called Celia Harvey. 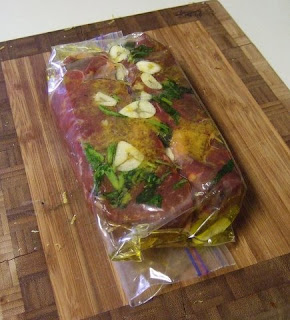 Ever since an entrant on Top Chef called Richard Blais demonstrated the technique on the show, I’ve wanted to try cooking ‘sous vide’.  But since I’d never done it before, I was slightly intimidated.  But really all ‘sous vide’ means is ‘under vacuum’.  You literally submerge whatever you’re cooking in a waterbath and cook it very gently with no direct contact with heat.  This keeps the meat very moist, actually beautiful so.  I could have immediately served the lamb I cooked this way and I am sure it would have tasted wonderful.  However, I like a little brown and so, following Celia’s directives, I seared the lamb, let it rest and then served it over a bed of Spring vegetables.
The lamb, which had first marinated in olive oil, garlic, lemon zest and tarragon had a fantastic flavor –much milder –and less ‘lamb-y” than a simple grilled lamb chop, for instance.  I really recommend you try this.  Celia’s recipe called for lamb loins.  This is not a very common cut of meat in my part of the world.  Instead, I used Lamb Steaks from Whole Foods.  I’d never had a lamb steak, which I discovered comes from a de-boned leg of lamb.  It was wonderfully tender  although I think I got my portion size all wrong. As you can see, there was a lot of lamb on each plate.  So I’d now say 8 ounces a person would be a gracious plenty.   In order for the cooking process to be even, the lamb you use must be the same weight and size.  And you do not really have to worry about the temperature too much.  I got my water to come to just below simmer, put the lamb into it for 10 minutes exactly, and voila, perfect lamb!  The vegetables are a wonderful foil for the lamb.  And please, do not omit the mint.  It adds immeasurably to the dish.  Here are the recipes.   They each serve four people.  I halved them all.
Recipe for Poached Lamb Steaks:
2 lamb steaks approximately 1 lb each.
Salt and Freshly Ground Pepper
1 heavy duty Freezer Bag (I use Zip Locs)
A mixture of fresh tarragon sprigs, the zest of one lemon and two cloves of garlic, slivered.
½ cup Extra Virgin Olive Oil
1.
1. Season the lamb steaks generously with salt and pepper, then put them in the Zip Loc bag with the tarragon, lemon zest, garlic and olive oil.  Force all air out of the bag and seal completely.  Bring the lamb to room temperature.  Heat water til it is barely simmering.  If you have a thermometer, keep the water at 100 degrees.  Immerse the Zip Loc bag in the water and keep it submerged for exactly 10 minutes.
2. 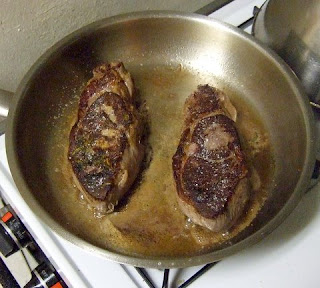 2. Heat a heavy skillet.  Remove the lamb from the bag, discard the garlic, lemon zest and tarragon, remembering that it will be hot, and sear the meat in the skillet. Rest for 10 minutes somewhere warm.  Slice and serve with Spring Vegetables.
Recipe for Spring Vegetables:
This is a very last minute dish that you can easily put together while the lamb rests. 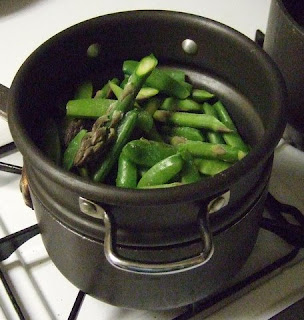