Review of Resto, a Belgian restaurant on E. 29th St. 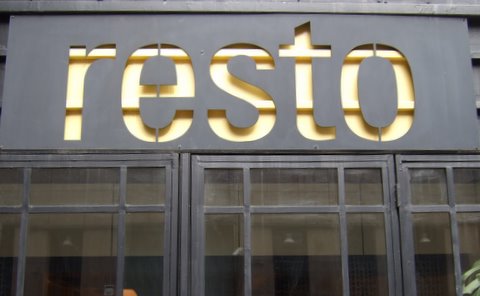 Restaurant Week in New York City is getting stranger and stranger.  First off, it lasted for 2 weeks before ending its run last Sunday.  When it started, the prix fixe made infinite good sense.  In the 1999, lunch cost $19.99. In 2007, it was $20.07.   Something odd happened this year because despite its being 2010, Restaurant Week’s prix fixe at lunch is now  $24.07.  But it’s always represented an opportunity to go somewhere new and try something different which is what a group of us decided to do last Friday when we met at Resto, 111 East 29th St. between Park and Lex (212-685-5585) https://www.restonyc.com/ 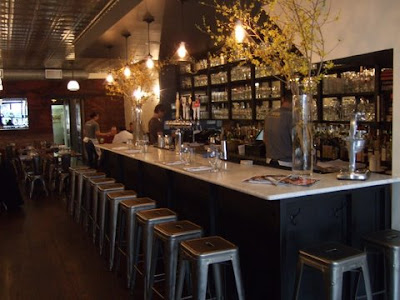 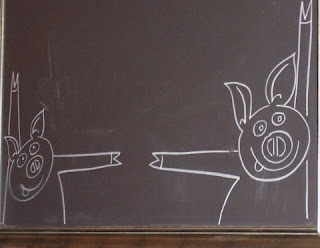 Resto roots are Belgian although its owner and manager are Greek and its chef’s name is Robert Hellen. Bobby, as he is most often called, was a sous-chef there before taking over the kitchen.  He is well-known for butchering his own meat for the place, most specifically pigs and given the number of pork dishes on the menu,  that makes a lot of sense.
But the Restaurant week menu is light on that house specialty, with housemade chorizo the only pork offering in a place with crispy pork toast, crispy pig’s ears, and tete de cochon on its regular menu.
There’s something else that was a little off-putting about the RW menu.  Fries are not included and this in a place where, for a price, you can order 8 dipping sauces to go along with them.  I just cannot imagine not having fries with the excellent burger that was on the menu.  So much for $24.07. 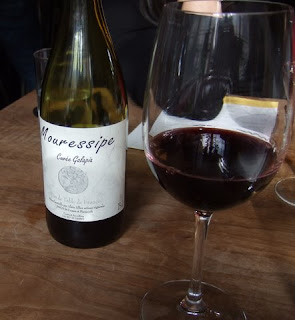 And while we’re on the subject, the wine list, while extensive, I initially thought was expensive.  We settled on a very nice bottle of what James Mallios, the General Manager of Resto, recommended: Mouressipe, an organic wine from Languedoc, which was unfiltered and delicious.  The $45.00 price tag sounded steep until I went to my local wine shop where the retail on the wine was $28.00. The second bottle –there were 6 of us- was simply not the same although we were told it was.   But try the wine if you get a chance. 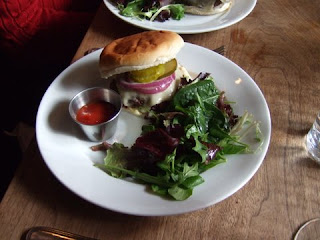 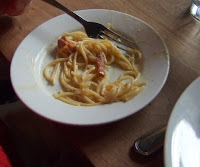 Everything we ate from the RW menu was very good.  A fine Bibb salad.  A very sweet onion soup.  A country pate.  And, when one of us nearly strayed onto the regular menu, we all were given a good tasting portion of the Belgian Hangover Pasta…which looked and tasted suspiciously like Spaghetti alla Carbonara and was delicious none-the-less,   Then we opted for the hamburger, a house specialty using flank steak, chuck and fat back which means while juicy and tender, medium is the standard preparation.  (Apparently, the fat back will not melt at medium rare.) For dessert, I chose the Liege waffle with Vanilla Crème fraiche and chocolate sauce. This waffle is studded with ‘pearl sugar’ and very good indeed.    Others chose the Pistachio Financier with kumquat preserves and tangerine agrumato. 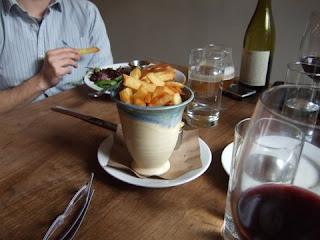 If there was one complaint, it was the extraordinary wait times between courses.  It’s nowhere to go unless you have a lot of time for lunch.  We were literally there for 2 and a half hours.  And when the check came, with its 20{4e4771bbe073b579fdd8e596ee487f65145483febbc8ba0a80525f62b26cad86} tip added for parties of 6 or more, we each had to come up with $70.00 which, let’s face it, is a far cry from $ 24.07 and more than I’ve spent for lunch since the Cipriani in Venice three years ago.   But I’ll go back –the fries are addictive and I really would like to try the pork.
Author: Monte Mathews
Filed Under: Restaurant Week, Resto, Reviews
Review of “Jamie’s Food Revolution” from Jamie Oliver and a recipe for a Quick and Easy Chicken Curry
Review of Bill’s Bar and Burger and a recipe for Chicken Parmigiano Burgers

1 thought on “Review of Resto, a Belgian restaurant on E. 29th St.”