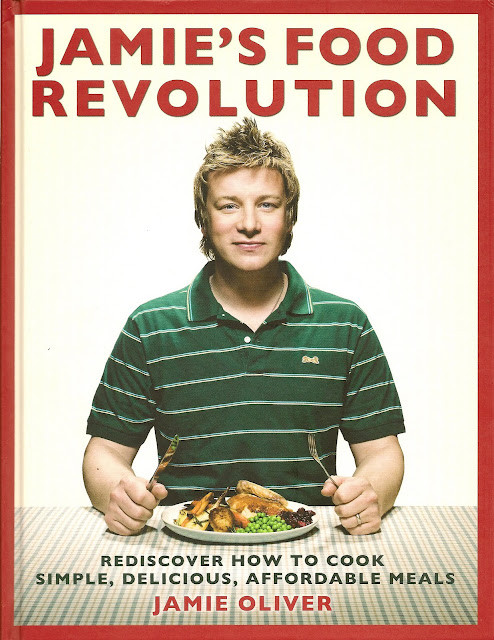 The first post on Chewing the Fat was about Jamie Oliver’s Beef and Guinness Pie so if you’ve been with us for the whole ride, you know I am a huge fan of the man. I was very pleased to see his latest book show up under the Christmas tree (“Jamie’s Food Revolution”, Hyperion 2009) It is both a book and a crusade. The crusade is to counter some really pretty dreadful statistics about eating in America and in Jamie’s native Britain. Did you have any idea that fewer than a third of Americans cook their dinners from scratch these days? Or worse, that although 75 {4e4771bbe073b579fdd8e596ee487f65145483febbc8ba0a80525f62b26cad86} of us eat most of our meals at home, over half of those dinners are fast food, delivery or takeout? Or even worse, that Americans spent more money on fast food in 2007 than they did on education? But Jamie has a plan.

It’s called “Pass it On”. Jamie wants to recruit his readers to learn just one recipe from each of the 14 chapters of “Food Revolution” and then, to pass those recipes (and assumedly some words of encouragement) to two more people. Or preferably four, because when Jamie does the math it works out that four disciples “teaching four more only needs to repeat itself”, listen to this, “thirteen times and we’ve got more than the entire population of the United States cooking”.
Jamie started his movement off in Rotherham, which I judge is about as stereotypically “Britain Today” as you can get. That means that cooking had fallen out of favor and, when Jamie launched his now-famous assault on British school lunches, resistance to his campaign there was fierce. Women actually went down to the school gates where they passed French Fries and Hamburgers to their children.
Undeterred, our Jamie went so far as to meet with one his most vociferous critics, a woman named Julie Critchlow, to see if he could convince her to ‘pass it on’. He must have succeeded as her picture and those of many ordinary Rotherhamites pepper the pages of “Food Revolution”. All of which is to say “if they can do it, I sure the hell can”. 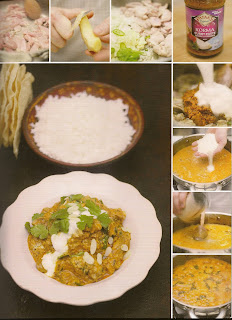 “Jamie’s Food Revolution” starts at the very beginning. It’s all there, starting with  what’s needed for kitchen quipment and what the pantry should hold.  From there it moves quickly into the first chapter called “Twenty Minute Meals”. He’s honest. You don’t make a meal in 20 minutes without some organization. And he’s all for bagged salads and flatbreads, quick cooking cuts of chicken and beef and fresh and frozen vegetables. There are more explanatory pictures than there are beauty shots of food and his recipes are very detailed and perfect for someone who’s one step beyond boiling water. But there are some gems here like Spicy Moroccan Stewed Fish with Couscous and Salmon Tikka with Cucumber Yogurt.
Photos at left by David Loftus and Chris Terry
What I wanted to try first were his recipes for Curries. I love Indian food and I think Americans misunderstood it most of the time. It’s not all fire-hot and it stretches your palate with fresh combinations like nuts and chickpeas. In Britain, where the most popular dish in the entire country is Chicken Tikka Masala, they know a thing or two about curries. (Well, maybe not quite as much as one would think: Tikka Masala’s background is murky but it is said to have originated not in India but in Glasgow, Scotland. There is an alternate story that says an Englishman in India complained of the spicy nature of a dish and an Indian cook doused it with tomato soup. Either way, Tikka is rather tame for aficionados of India’s spicier options). 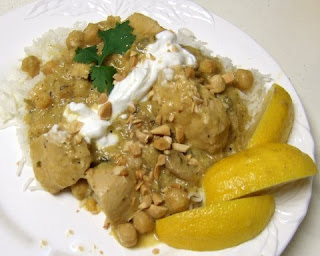 I was anxious to try Jamie’s recipe for Chicken Korma. I think Curries are a perfect winter dish; warming and rich and only selectively spicy. Jamie actually adds a fresh green chile to give this recipe more kick. Frankly, I felt this really needed more heat. However, it is a perfect introduction to the mildest taste of India. Children will undoubtedly love it since it’s truly sweet and very creamy. I also cut back on the liquid in Jamie’s orginal recipe. It was very soupy otherwise. In terms of ease, Jamie relies on Patak’s Korma Curry Paste which I found in plentiful supply, along with dozens of other variants for other curries, in Fairway. However, I upped the quantity from the original recipe to add more flavor and body to the sauce. While this recipe is certainly worth cooking, later this week please come back and I’ll share a far more exciting Indian encounter that hails from….Canada, where else?
In Indian cooking, the skin of the chicken is never eaten so if you don’t use skinless chicken breasts, remove the skin please. Here is the recipe: 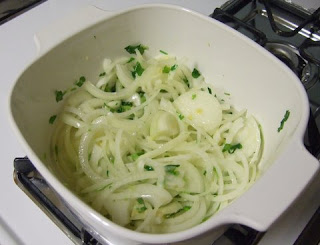 2. Put a large Dutch oven or casserole-type pan on high heat and add a couple of glugs of oil. Stir in the onions, chile, ginger and coriander stalks with the butter. Keep stirring, so that it doesn’t stick to the pan, but turns evenly golden. Cook for around 10 minutes.
3. Add the ko 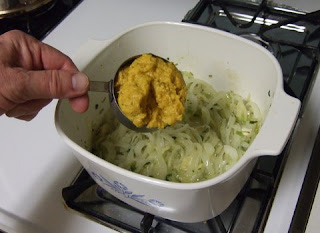 rma curry paste, coconut milk, the almonds, the drained chickpeas and the chicken. Bring to the boil, then turn the heat down and simmer for 30 minutes with the lid on. 4. When the chicken is tender and cooked, taste and season with salt and pepper – but please season carefully. Serve with fluffy Basmati rice, adding a few spoonfuls of Greek yogurt dolloped on top of the korma, and sprinkle over the rest of the almonds. Finish by topping the dish with cilantro leaves, and serve with lemon wedges for squeezing over.