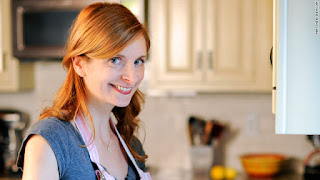 The Breakfast Casserole is a particularly welcome dish over the holidays. With school out and plenty of days off, breakfast becomes a much bigger deal.  In truth, Melissa Clark’s most recent contribution to this genre is a prefect brunch dish as well.  It gets its name not from its butter content but from the buttery base of golden brown Croissants that are the foundation of this luscious dish.  Almost all breakfast casseroles feature bread of some kind, generally the staler the better.  Stale bread eagerly sops up the egg, milk, and cream mixture.  Here, Melissa used fresh Croissants. The croissants are toasted in the oven which achieves the same result as stale bread.   The Gruyère cheese and sausage are a classic pairing and they make for a wonderful surprise in the layers of egg-y, custardy goodness. This dish would be a stand-out even if it didn’t offer one of its greatest assets: it’s easy to assemble the night before and then it’s popped in the oven an hour before you want to serve it. 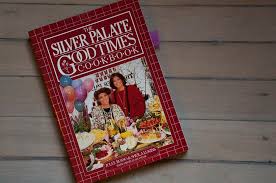 The breakfast casserole is a relatively new arrival on the food scene. I cannot find any mention of it prior to 1970 although a woman from Cincinnati claims her mother-in-law included a recipe for what she called the Breakfast Dish in a family cookbook from the 1950s.  Certainly the recipe she produced stuck to the basics of egg, milk, bread, and cheese. She left the protein pretty much up to the cook.  Ham, Sausage, Bacon were all listed as possibilities.  A breakfast casserole by any other name is…an Egg Strata.  Even then, the Strata could only be found in a recipe dating back to 1902 but that dish, made with layers of bread, white sauce, and cheese contained no eggs at all.   But digging a little deeper, one source attributed the popularity of the Egg Strata (aka the Breakfast Casserole) to 1984’s The Silver Palate Good Times Cookbook by Julee Rousso and Sheila Lukins.  In a strange

coincidence, this famous team’s pioneering gourmet take-out food shop was just blocks from where we live in New York.  Since The Silver Palate Cookbook remains one of the best-selling cookbooks of all time, it’s likely that alone would have made the Breakfast Casserole supremely popular.

I made very few changes to Melissa Clark’s recipe.  I did up the number of eggs and I also used a ‘roll’ of Jone’s Pork Sausage in lieu of the Italian Sweet Sausage Melissa called for.  Although the recipe says that it serves 8 to 10, 5 of us hardly made a dent in half this rich, savory dish with its beautiful brown top. Here is the recipe:
Recipe for Melissa Clark’s Buttery Breakfast Casserole
20 minutes, prep, and initial cooking time. Plus a minimum of 4 hours refrigerated.  Plus 45 minutes baking time on Day 2, followed by 10 minutes standing. 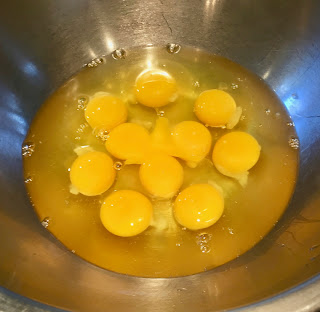 1 pound croissants (about 5 to 7), split in half lengthwise 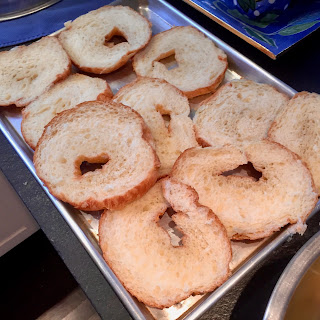 1. Heat oven to 425 degrees. Spread croissants on a large baking sheet and toast, cut side up, until golden brown, 5 to 10 minutes (watch carefully to see that they do not burn). Let cool, then tear into large bite-size pieces. 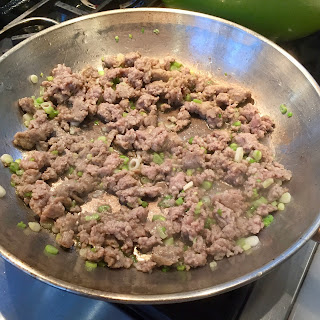 3. In a medium skillet over medium-high heat, warm the olive oil. Add sliced scallions and sausage meat; cook, breaking up meat with a fork, until mixture is well browned, about 5 minutes. Stir in sage, and remove from heat. 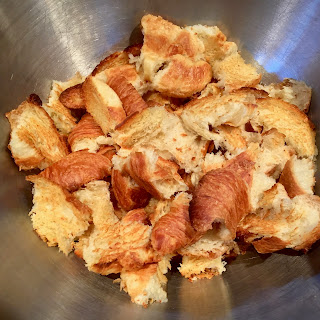 4. In a large bowl, toss together croissants and sausage mixture. In a separate bowl, whisk together eggs, milk, cream, 1 1/2 cups cheese, salt and pepper. 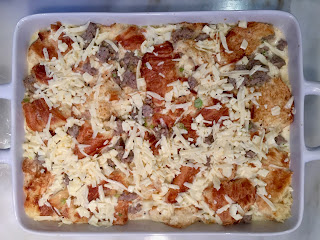 5. Lightly oil a 10 x 14-inch baking dish. Turn croissant mixture into pan, spreading it out evenly over the bottom. Pour custard into pan, pressing croissants down gently to help absorb the liquid. Cover pan with plastic wrap and refrigerate at least 4 hours or overnight. 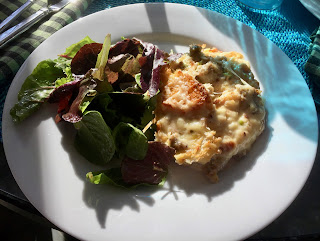 6. When you’re ready to bake the casserole, heat oven to 350 degrees. Scatter the remaining grated cheese over the top of the casserole. Transfer to oven and bake until casserole is golden brown and firm to the touch, 45 minutes. Let stand 10 minutes. Garnish with sliced scallion tops before serving.