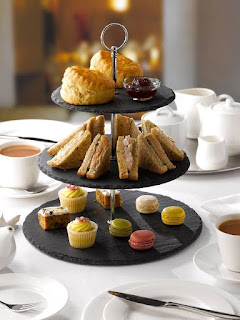 Ah the scone!  Properly made, they’re a thing of great joy at tea time or coffee hour.   But the greater likelihood is that the scone most people encounter comes off as heavy as a hockey puck and just about as appetizing. No matter how much clotted cream is laid on top, an awful lot of scones are dry and tasteless. That had been Andrew’s experience until we encountered the perfect scone. We were aboard Viking Sea where the old adage about salt air making one ravenously hungry was proven true.  Completely out of character, we decided to participate in afternoon tea.  Not that Andrew actually drank tea—he chose a cup of coffee instead. But there we were presented with a triple-decker tray piled with cookies, finger sandwiches, macarons and topping it off, buttery, moist and tender scones. Ever since we got home, Andrew has been making variations on the scone to great success and accolades from every single scone doubter.  His scones are a masterpiece and the source of his recipe is just as fascinating. 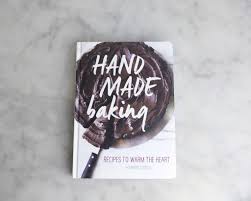 For years, Andrew has been baking with Lucy.  The daughter of dear friends of ours, Lucy has gotten so proficient at baking that she started her own enterprise ­­­­­­­­­­­­­­­“Leave it to Lucy” where she creates the most exquisite cakes and pies and cookies to order for all occasions. You can reach Lucy at lucyrs.612@gamail.comand tell her Andrew and Monte sent you.  Andrew takes a great interest in Lucy’s blossoming career. The other day she introduced him to a baking book she knew he would like.  It’s called “Hand Made Baking. Recipes to Warm the Heart” (Chronicle Books 2014).  Its author is a 22 year old food blogger named Kamran Siddiqi.   It’s almost astonishing that someone that young is so adept in the kitchen.  He comes by his skills honestly as his international family have been food lovers for generations.
Kamran’s mother was a scone skeptic herself: According to Kamran,   “The very first time I baked scones for my mother,” says Kamran,  “she cautiously bit into one, saying, ‘I really don’t like scones.’ But almost immediately, she smiled. Like many people, my mother had memories of scones best described as dull, heavy, or dry. Instead these were buttery, moist, and tender. The secret to good scones is to handle the dough as little as possible and to use cold ingredients to achieve flaky layers; that’s about it! These are proper scones—ones that will heal anyone’s memories of bad scones.”  And so they will.  But before we share the recipe, what about that essential clotted cream that is paired with scones in much the same way as “a la mode” is with apple pie? 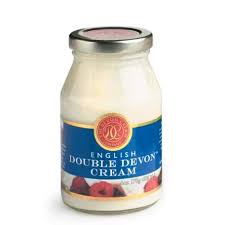 Clotted cream, which is called by a number of names—Scalded, Clouted, Devonshire or Cornish cream—was originally made in southwest Britain. There, farmers who were looking to reduce the amount of waste from their milk, indirectly heated their full-cream cow’s milk using a bain marie or steam bath which they left in shallow pans to slowly cool.   The cream content rose to the surface and formed “clots” or “clouts”.  The cream’s taste is sometimes described as a nutty, cooked milk flavor with a texture that’s grainy.  It is indeed a very thick cream with a very high fat content averaging 64 percent. In the US it would actually be classified as butter.  For comparison, ordinary cream has a fat content of only 18 percent.  Believe it or not, I found “English Double Devon Cream” in my supermarket all the way out here on eastern Long Island. I wouldn’t say it was essential to the cream scone experience. In fact, our friends Bethany and John, recipients of Andrew’s scones told they had had paired Andrew’s scones with vanilla ice cream creating Scones a la mode.  Here is the recipe: 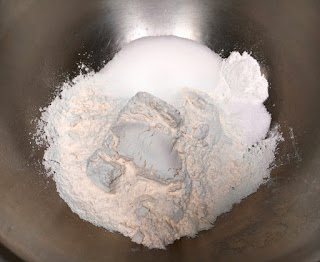 1. In a large bowl, whisk together the flour, sugar, baking powder, and salt. 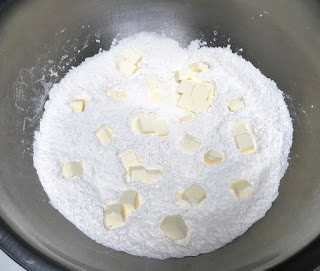 2. Add the butter and rub it into the flour mixture with your fingertips, two butter knives, or a pastry blender until the mixture resembles coarse meal and no pieces of butter are larger than a pea. 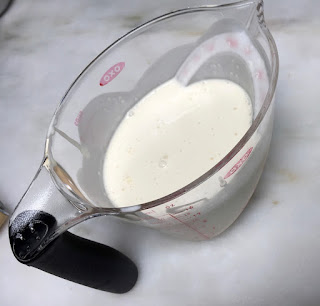 3. In a glass measuring cup, beat together the cream, egg, and vanilla. 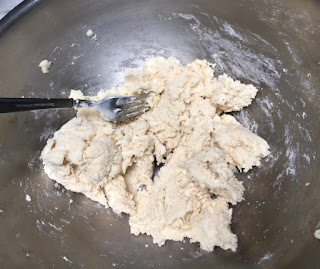 4. Pour the cream mixture into the flour mixture, and stir until a dough forms.
5. Lightly flour a clean work surface and turn out the dough, gently kneading it onto itself for 10 seconds. Pat the dough into a square about ¾ in/2 cm thick and let it rest for 15 minutes. Position a rack in the center of the oven. Preheat the oven to 425°F/220°C. Line a rimmed baking sheet with parchment paper. 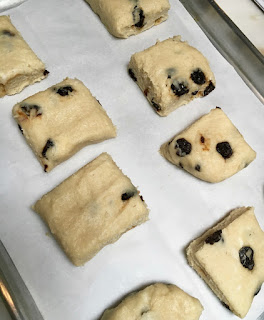 6. Once the oven has preheated, use a knife to cut the dough into nine squares and put them on the prepared baking sheet. Or use a round cutter or the rim of a glass dipped in flour to punch out circles of dough. Be sure to cut them as closely to one another as possible; you should get six rounds, and when you pat the dough back together (it doesn’t need to be a square this time), you should be able to get three more rounds. Avoid rerolling the dough during this second stage, as this will result in tough scones.
Make the topping: 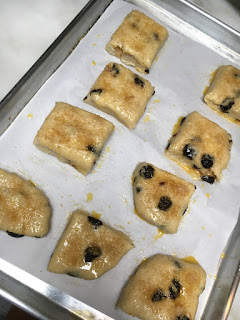 1. In a small bowl, beat together the egg, granulated sugar, and salt. Lightly brush the tops of the dough pieces with the mixture and wait 1 minute until the topping sets. Sprinkle the tops with Demerara sugar (about ½ tsp per scone). Bake for 13 to 18 min¬utes, until the scones are golden brown. Be sure to rotate the pan halfway through baking.
Allow the scones to sit in the pan for 2 minutes before transferring to a wire rack to cool for 5 to 10 minutes more.
Serve the same day. 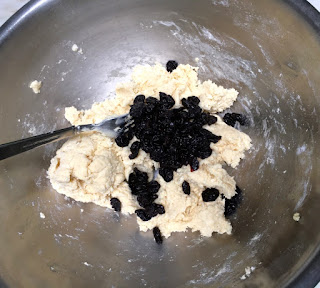 1. These scones are enjoyable plain, with jam, with a pat of butter, or with a bit of Devonshire cream. Or add 1 cup/125 g of fresh or frozen berries (don’t thaw them) to the dough—your results will turn out like the pictured scones.
The first method: Roll out the dough into a 7-by-12-in/17-by-30-cm rectangle and place the berries on one side of the dough, leaving a ½-in/12-mm border. Fold the dough in half and press down on it with your hands until the dough is ¾ in/2 cm thick. Proceed to cut. If the berries slide out, just push them back in.The second method: Simply knead the berries into the dough before you pat it into a square and cut it.
Author: Monte Mathews
Filed Under: Baking, British Food, Cream Scones and Clotted Cream, Desserts, English Teas, Hand Made Baking recipes, Kamran Siddiqi's Cream Scones, Scones
A gorgeous addition to any Easter Table….Andrew decks out Ina Garten’s Coconut Cupcakes and Chewing the Fat celebrates our One Millionth reader!
The first new post on the Blog just had to be from our Baker-in-Chief… Andrew’s Fig Raspberry Hand Pies