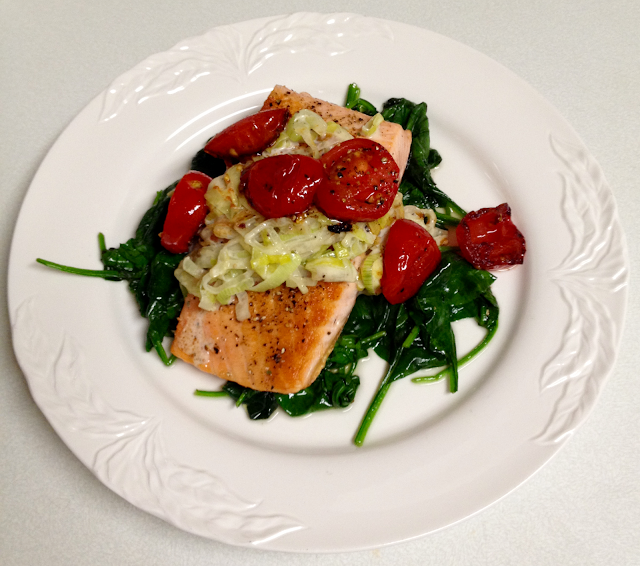 Salmon is truly a lifesaver for harried weeknight cooks.  Now I suppose that means most of us, most of the week. But there’s another great plus to cooking salmon.  That is when you need something to start cooking only when the last family member walks in the door. This entire dinner took all of 20 minutes to put together.  It relies on sautéing the fish on the stove top, at the same time that you make a creamy-rich ‘sauce’ of the leeks.    The fish takes all of 4 minutes to cook if you like your salmon medium rare, 2 minutes more for well-done fish.   Once the fish is done, the ripe ‘tomatoes on the vine’ take a swim in lemon juice in the fish pan.  I served the fish on a bed of baby spinach that was sautéed in a non-stick pan at the same time as the fish.  What you end up with is the delicate sweetness of salmon, creamy-rich leeks and tart red tomatoes combined in a dish that’s as appealingly colorful as it is great tasting.
I  chose this on a night that Andrew was coming home late.  I waited until I saw the whites of his eyes.  But he asked for a few minutes to call a client.  I was convinced the call was ending and started the dish.  Much to my chagrin, the call had not ended and this dinner cooked so quickly, I thought we were in for a lukewarm version, that’s how fast it is to prepare.  6 ounces of salmon is about as much as you need per person.  Mine, from Trader Joe’s, weighed in at a pound.  As to the leeks, you’ll find already trimmed ones at TJ’s as well. And finally, the smallest size ‘tomatoes on the vine’ were pressed into service but any tomato will do—as long as they are perfectly ripe. In winter here, the only reliable tomatoes are the smallest of them—grape tomatoes, cherry tomatoes and these called “Pearls” which are of Mexican origin. Here is my recipe:
Sautéed Salmon with Creamy Leeks and Tomatoes
Serves 2. Takes 20 minutes to make. 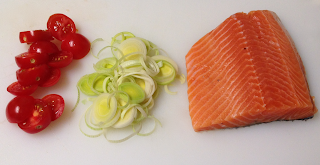 Salt and Pepper to taste

6 oz of baby spinach sautéed
1. Start with the fish at room temperature.  This will cut the cooking time down drastically.  Check to see if there are any ‘pin’ bones in your salmon and remove any with tweezers, discarding them. Generously sprinkle the fish with salt and freshly-ground pepper. 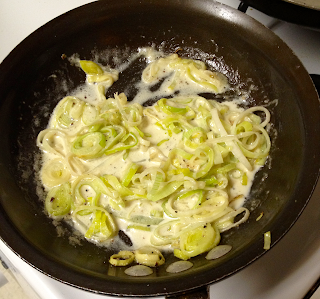 2. In a small saucepan, heat the butter and once it has foamed add the leeks and gently cook them until they are soft, but not browned.

Add the cream, stir to combine with the leeks and then turn off the heat.
In a separate non-stick skillet, drizzle a tablespoon of olive oil. Put the baby spinach into the pan and cook the spinach over low heat, covered.  Once it has wilted, turn off the burner and reserve the spinach.
Heat 2 tbsp. of Olive Oil in a second nonstick skillet over moderately high heat. Add the salmon filets skin side down. Cook two minutes, then flip the fish and cook a further two minutes for medium rare, four for well done salmon.  Transfer the fish to a warm plate. Add the tomatoes and lemon juice to the salmon sauté pan and cook for just a minute. 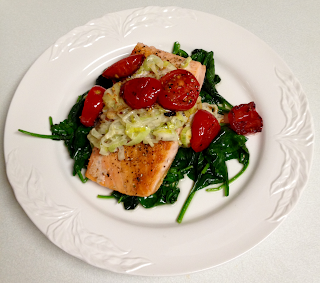 3. Put a layer of spinach on each plate. Put a salmon filet on the spinach. Spoon the Creamy Leeks over the top of the salmon and put the tomatoes on top of that.  Serve at once.

2 thoughts on “Sautéed Salmon with Creamy Leeks and Tomatoes”