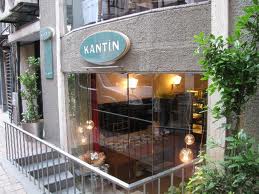 Need I tell you, we didn’t have lamb for Easter.  Instead, we had one of our glorious whole, bone-in hams, with a side of Kielbasa.  As much as we enjoyed our feast, I had lamb on my mind when we came back to the city.  A couple of weeks ago, I’d found a recipe for Lamb Pizza.  Pizza, I need not tell you, has pretty well taken over the world.  And apparently Turkey is no exception.  This particular pizza is the work of a woman named Semsa Denizsel who owns a take-out food shop and restaurant in Istanbul called Kantin.  Chef Denizsel is no stranger to Food and Wine Magazine, which is where I encountered her recipe. She’s provided them with four of her recipes so far.  I am sure there are more coming as Ms. Denizsel is acquiring a reputation as an authority on Turkish Cuisine.  Kantin is located in Istanbul’s poshest neighborhood.  Now 13 years old, the focus of the food there is simple, honest, and homemade.  The Chef is a complete locavore and a seasonal cook.  So even when something like eggplant floods the markets of Istanbul, if it isn’t locally grown or in season you won’t find it at Kantin.  What you will find is inventive cooking like these lamb pizzas spiced with red pepper and sweetened with sun-dried tomatoes.  Topped with an egg and baked in a hot oven, they elevate a simple weeknight supper into an adventure.

Chef Denizsel makes her own crust with simple whole wheat dough.  I took one look at it and realized it looked awfully familiar. So instead of doing any baking, I took whole wheat pitas that you can find pretty well everywhere, halved them and put the Chefs lamb topping onto them, cracked an egg over each one, and after 7 minutes in the oven, they were done.  And they were delicious.  I wish I could have stuck completely to the recipe and found the Turkish Red Pepper Paste called Biber Salcasi but the recommended stand-in hot cherry peppers are a staple in our fridge.  Chopped into a tiny dice with the sun-dried tomatoes, their flecks of red greatly enhanced the look of the ground lamb.  The egg is the icing on the cake.  It’s not only pretty but oozing over the lamb mixture, it’s an unctuous pleasure.

Confession time:  This was the second time I’ve made these. But that version didn’t get into the blog.  The reason was this: Often, when the number of portions is given as 4, I don’t completely half the recipe. I cut back but I’m more likely to make the whole thing and put the leftovers in the fridge for lunch.  Here, I made the whole recipe for the topping, and then, overwhelmed by how wonderfully it smelled and looked, loaded it onto the Pita.  Quite honestly, it was just too much. It really needed to be the recommended portion or ¼ of the topping for each pizza. Keeping that in mind, here’s the recipe for four Pita Pizzas.

Recipe for Turkish Lamb Pita Pizzas
4 Whole Wheat Pitas*
* To make it easy to slice the Pitas in half, first microwave them for 30 seconds.  They will puff up and be easier to divide into halves.  Use the half that has ‘sides’.  That will keep the lamb filling in place.  Reserve the others – toasted, they make marvelous crisps for hummus or any other cocktail spread
For the topping:
1 tablespoon extra-virgin olive oil, plus more for brushing
1 small onion, finely chopped
1 pound ground lamb or beef
1 garlic clove, minced
Salt
Freshly ground pepper
1/4 cup chopped drained oil-packed sun-dried tomatoes
1 tablespoon Turkish red pepper paste (Biber Salcasi)
or 2 jarred hot cherry peppers, minced
1/2 teaspoon ground cumin
4 large eggs (optional)
2 tablespoons flat-leaf parsley leaves 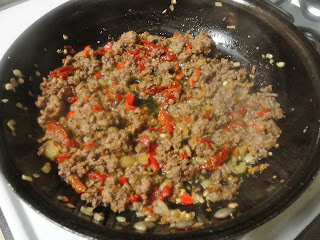 In a skillet, heat the 1 tablespoon of olive oil. Add the onion and cook over moderate heat until translucent, 4 minutes. Add the lamb and garlic and season with salt and pepper. Cook over moderately high heat, breaking up the meat with a wooden spoon, until the lamb is no longer pink, 3 minutes. Add the sun-dried tomatoes, red pepper paste and cumin and cook, stirring, for 1 minute. Remove from the heat and season with salt and pepper.
Preheat the oven to 450°. Arrange oven racks on the top and bottom thirds of the oven. Preheat a large rimmed baking sheet in the oven for about 5 minutes. 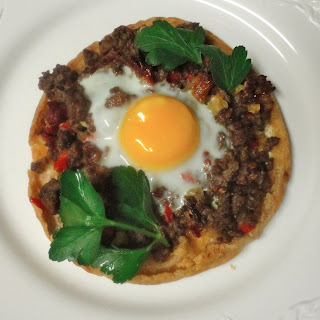 Spread the lamb topping over the pita halves, leaving a 1/2-inch border around the edges; Crack an egg in the center of each pizza (if using) and bake on the top shelf of the oven for about 7 minutes, until the crust is crisp on the bottom, the egg white is firm and the yolk is runny. Scatter the parsley over the pizzas and serve hot.
Author: Monte Mathews
Filed Under: 30 Minute Dinners, Food and Wine Magazine, Lamb, Lamb Pizza, Pizza, Semsa Denizsel, Turkish Cooking, Turkish Lamb Pizza, Weeknight Suppers
The Perfect Patty Melt and it’s most imperfect imitator, "The Midtown Melt"
Sauteed Trout with Lemon-Chile Butter adapted from Food and Wine Magazine