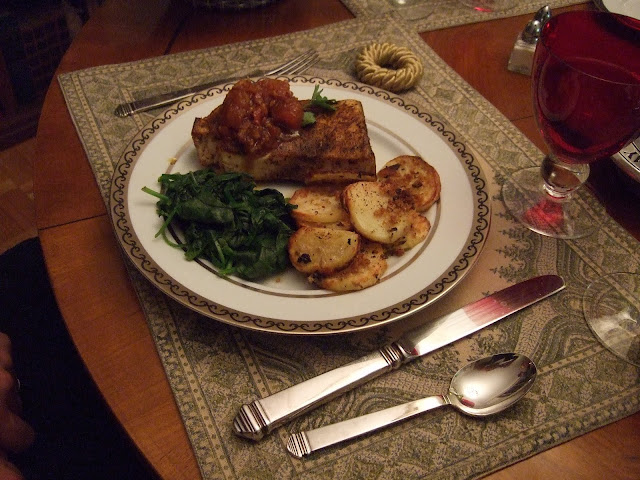 A recent dinner was so good that I didn’t want it to go unnoticed. And it was another excellent way of beating the clock this hectic time of year. In no time at all, you have something satisfying and truly special that’s good enough for company and a terrific treat for everyone.
It featured an old familiar dish that I am always delighted to eat: Swordfish. I remember as a child it was considered quite a treat and we ate it all summer in Nantucket while I was growing up.
I seem to remember it was grilled and spritzed with lemon. But my preferred method now is to blacken it, sauté it in butter and serve it with a fresh tomato chutney.
Before we start, let’s get the Swordfish/Mercury issue out of the way. Our guests the night we served this, Julie and Geoff Smith, told us their children’s grandfather never fails to mention it every time it’s served to his grandchildren, Henry and Lucy. Here’s what I discovered:
The FDA issued a document in 2004 in which it recommends incorporating fish and shellfish into a healthy diet. It spelled out all the pluses associated with eating seafood—low in saturated fat, high in omega 3s fatty acids, great for heart health and young children’s growth and development. However, they go on to say that fish with elevated levels of mercury are not recommended for unborn babies and very young children so that expectant and nursing mothers and small children should avoid eating seafood high in mercury.  Henry, 11, and Lucy, 9, are off the hook.
Interestingly, nearly all fish and shellfish contain traces of mercury, some more than others. The mercury content of fish is based on their size and their age. And there’s where swordfish is, number 3 behind Mackerel and Shark and just ahead of tilefish. (Better seafood options if you are trying to avoid mercury are shrimp, canned light tuna, salmon, Pollack and catfish.) If you are not in one of the above-mentioned groups, it’s likely a good idea to limit your intake of swordfish, for example, to 12 ounces a week. Or you may end up like Jeremy Piven and have to give up your Broadway career aspirations. You can read the entire piece on the FDA website at https://www.fda.gov/FoodSafety/ProductSpecificInformation/Seafood/FoodbornePathogens
Now back to cooking the fish…Blackening is something I learned from a Paul Prudhomme cookbook called “Chef Paul Prudhomme’s Louisiana Kitchen” first published in 1984 and when I looked it up on Amazon, available used for .66 cents. Well this recipe alone is worth far more than that. Normally, I would make my own seasoning, the one provided in the cookbook. It makes a lot of sense to make a big batch o 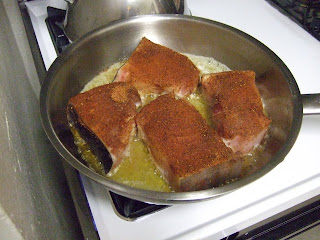 f the stuff and have it on hand whenever you want it. However, my main spice rack is out at the beach and Chef Paul has kindly provided us with a version called Blackened Redfish Magic which is part of his Magic Seasoning Blends. This is what I used last night, augmented with a couple of passes of Shichimi Togarashi, my go-to Japanese Red Pepper Mix. You’ll note that Chef Paul’s seasonings are for blackfish. I’ve only used this on sword to great applause. To make your own, here’s the recipe:

As previously mentioned, it makes sense to make this mixture in bulk. But the above portions are certainly enough for the 2 pounds of swordfish I cooked.

1. Mix all seasonings together in a bowl.
2. Place fish on a cutting board and generously coat both sides with the seasoning mix.
3. Set aside in refrigerator while you make the tomato chutney.
The contrast between the spice of the fish and the relative sweetness of the chutney is what makes this dish so delicious. 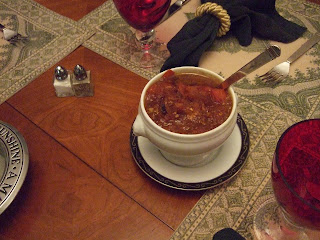 I made this for four. It was certainly enough for that number but you can easily double or even triple the recipe.

1. In a skillet, heat the oil and add the bay leaf, cinnamon stick, and cloves. Cook briefly.

2. Then add the shallot, garlic and ginger and sauté over medium high heat for 2 minutes.
3. Add the tomatoes and the kicap manis or brown sugar. Cover and cook for 10 minutes.
4. Remove from heat. Remove the bay leaf, the cinnamon stick and the cloves. Put chutney in a bowl and set aside until you serve it with the swordfish.

*Kicap Manis is sweet soy sauce found in Asian markets or online at www.indokiosk.com . I have a passion for this ingredient but feel free to substitute brown sugar. 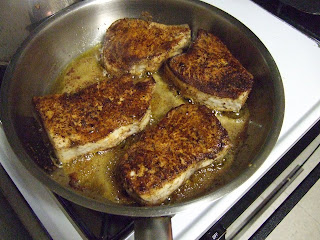 1. Heat 4 tbsp. of butter in a heavy bottomed sauté pan until it sizzles and the foam subsides.
2. Cook swordfish approximately 4 minutes a side turning only once.
3. Serve with fresh tomato chutney.
I served this with some grilled potatoes and sautéed spinach. So easy. So good.